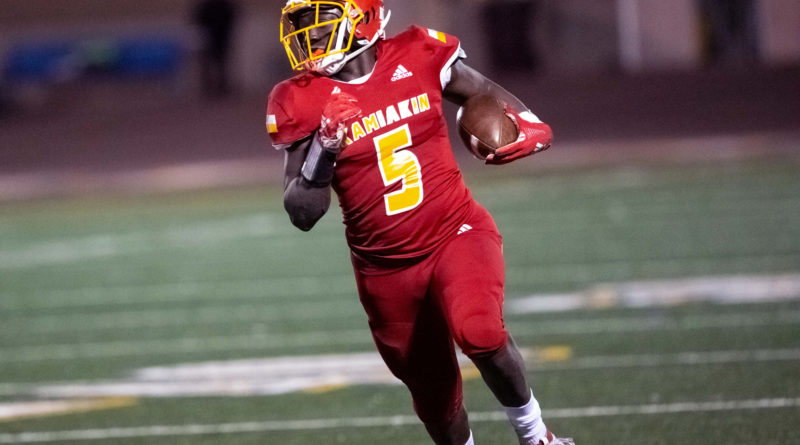 SBLive Washington is previewing the Top 50 high school football teams in the state ahead of the 2020-2021 season. Here’s an inside look at the Kamiakin Braves of the 4A/3A Mid-Columbia Conference – No. 13 in our countdown.

7-3 (third place in MCC); lost to Mount Spokane in 3A district round.

One-cut bulldozer added burst when he lost weight, and used that to flatten MCC interior defenders.

The most refined route-running outside receiver in the Kamiakin offense, EWU signee can really catch and go.

What can’t he do? A starter since his ninth-grade year, he can rush the passer and control the line of scrimmage.

Scott Biglin had a plan when he took over this job more than a decade ago: Establish one of the most aggressive downfield-passing offenses in the state.

And what would you really expect from a former state championship quarterback at Pasco High School who went on to become a two-sport standout in college at Whitworth College?

It is that kind of approach that netted Biglin and the Braves a Class 3A state title in 2016 – and has them back as the favorites in a strong MCC this shortened season.

“I really feel like we are going to be a very balanced offense,” Biglin said.

That makes sense, given Kamiakin returns the bulk of its skill-position star power, led by bruising tailback Tuna Altahir, the league’s reigning offensive player of the year who rushed for a season-best 1,406 yards and 20 touchdowns as a junior.

But in the games when defenses of good teams (Kennewick, Chiawana, Mount Spokane) were able to clamp down on the Braves’ star runner, this passing offense struggled to hold up its end.

Part of it was the relative inexperience of dual-threat quarterback Henry Mercado, a first-year starter who had difficulty connecting consistently with two of the better outside receiving threats in the state in Woodley Downard and Messiah Jones. Both are Eastern Washington University signees.

Mercado is bound to be much improved in his second season, and don’t forget about another emerging name – Payton Graham, son of former DeSales state record-holding quarterback (and coach) Pat Graham, who is now a Kamiakin assistant.

As aggressive as this defense was in getting after opposing quarterbacks, the Braves did struggle in key games to slow down good rushing attacks. They should be better a year later, led by do-everything linebacker Luis Salgado.

“It has definitely had an impact. Players are choosing to play baseball or other sports. We have to balance spring conflicts.” – Scott Biglin