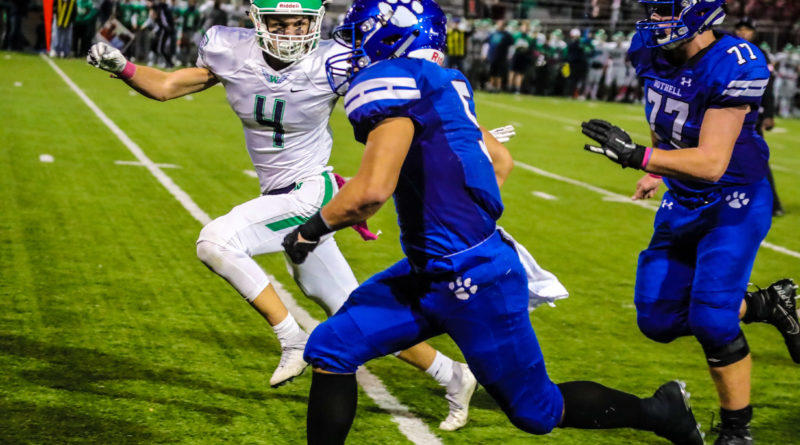 SBLive Washington is previewing the Top 50 high school football teams in the state ahead of the 2020-2021 season. Here’s an inside look at the Woodinville Falcons of the 4A KingCo – No. 12 in our countdown.

WSU signee is lean, mean, pass-rushing machine who could grow into being a defensive tackle in college.

Much like Cage Schenck, he can break ankles with a variety of moves – from a lot of positions (WR, CB, returner).

Mostly has played center – until last season when he shifted one spot over to help open holes for RB Joey Johnson.

And after three consecutive seasons of making the 4A semifinals or better, Maxwell has many new pieces to figure out.

Never underestimate Maxwell, a soft-spoken leader who speaks glowingly about the next wave of talent coming through the program.

And in the skill positions, Woodinville will likely rotate more players – up to five running backs, led by Henry Nichols; and whole lot of wide receivers, paced by Morgan Holliday out of the slot.

“We have a deep skill-position group – and a similar group of underclassmen much like we had with Nash (Fouch) and Jaden (Sheffey),” said Maxwell of his nucleus of seniors who led them to the Class 4A title game in 2017. “They are just inexperienced.”

Who will play quarterback? Maxwell has a pair with similar skill sets in senior Michael Deuster – Stifle’s backup in 2019 – and junior Theo Grothen.

“They are not like Noah, who created problems in space,” Maxwell said. “These guys are shifty enough to do what we want in our offense. Both are smart, level-headed and have strong arms.”

On defense, junior Isaac Fuiten – one of the few returning starters – will move from outside linebacker to the secondary, and is expected to to be a ball-hawking presence.

“The kids buy into the program and what we want to do, and establish a high expectation, on and off the field,” Maxwell said.

“(Northshore School District) is conservative (in allowing students back) … but I think our kids have actually done a great job in the engagement that we have asked with them during the social-distancing time.” – Wayne Maxwell