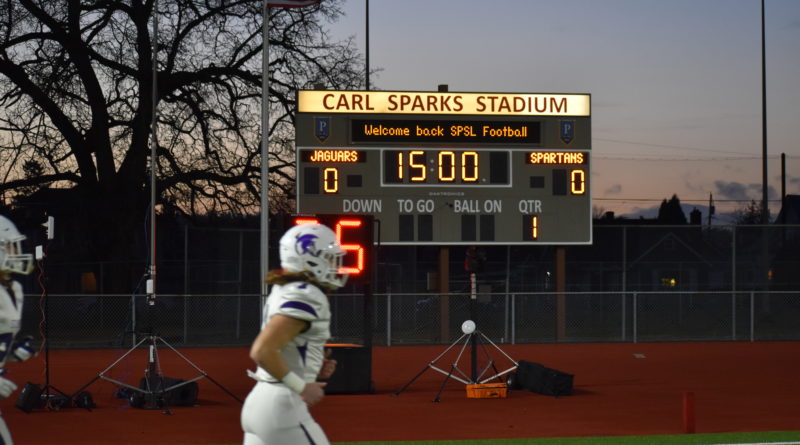 It wasn’t that long ago when Sumner High School was a Class 4A championship contender.

And it appears the Spartans might be building for another extended run. They completely shut down Emerald Ridge in a 46-0 victory Thursday night at Sparks Stadium in Puyallup.

Peyton Wing rushed for 96 yards and scored four touchdowns, and Sumner’s defense held the Jaguars – a 4A playoff team a year ago – to just 67 total yards.

Here are five observations from the Sumner-Emerald Ridge game:

LAST WEEK’S WIN WAS NOSTALGIC. THIS WIN WAS TONE-SETTING

But now after beating the Jaguars so convincingly – a team that upended the Spartans in 2019? Ross knows this could be the game that puts his Spartans back on the map.

Oh, and this – Ross and his team are big fans (wink, wink) of where Sumner landed in SBLive Washington’s top-50 all-classification rankings – 37th.

“I wrote that on the kids’ hands,” Ross said.

“We kept it under wraps. We have young kids that nobody has heard about.”

As much extended success Ross’ defense has had over the years, the Sumner offense has been a bit more hit-or-miss – especially the past two seasons.

The Spartans made some changes in the offseason. But it is obvious where the spark is coming from early on – the dual-threat Carlson.

He led the team to a pair of touchdowns in the first 6 minutes, 13 seconds on Thursday with scoring passes to Wing (9, 16). And on the Spartans’ first series of the second half, he got loose on a scramble and scored on a 9-yard run.

“He is taking control of the offense like a beast,” Wing said.

“Bo has a lot of tools. For this offense, he is perfect,” Ross said. “He can get it out. He can make reads under pressure. He can run it – and be physical at the end of his runs.”

Wing has patiently waited his turn to take over this backfield.

“But when you get it,” he said, “you have to take advantage of it.”

Never mind the seven total touchdowns in two games – Wing as such a vast skill set on both sides of the ball, Ross calls him the team’s best two-way player.

He is a tailback that doesn’t zig-zag on runs, yet has good enough wiggle to avoid tacklers in open space, especially as a pass catcher.

As a linebacker, he controls the middle quite well – with a combination of power and athleticism. The one-handed interception he made at the end of the first half is as good a defensive play as you’ll find anywhere.

“That felt pretty cool,” he said. “I was just trying to get in the way, and I picked it. It was sweet.”

THIS VERSON OF ANDREW TILLETT IS UNSTOPPABLE

With Wing, Tristan Dunn and Jay Mentink roaming the back end of Sumner’s defense, this unit has no shortage of athletes.

But up front, if this is the Tillett the Spartans have been waiting for – this has the makings of one of the school’s great defenses.

Tillett was a backfield menace from his defensive tackle spot again Thursday night, this time recording three tackles for loss. He had four TFL in the win over Curtis.

For years, Ross has been touting Tillett’s high-ceiling talent. But after an off year in 2019, the coach had a heart-to-heart discussion about his future.

“He got lazy and he got too heavy,” Ross said.

The two became offseason workout partners, and Tillett was greatly reshaped his body. Ross also challenged him to be a more consistent force.

“His attitude, conditioning and energy level have been off the charts,” Ross said.

BIG PLAYS WILL COME FOR JAGUARS … JUST NOT THURSDAY

It was just one of those nights – cold and windy – when the Emerald Ridge offense was completely bottled up.

A lot of the Jaguars’ success moving forward this season will revolve around how involved they can get standout wide receiver Denzel Boston in the passing attack. He was held in check Thursday night – a week after reeling in six catches for 127 yards and a touchdown against Rogers of Puyallup.

“(Sumner) didi a great job,” Emerald Ridge coach Adam Schakel said. “We got into a hole early … and we didn’t make plays when we needed to.