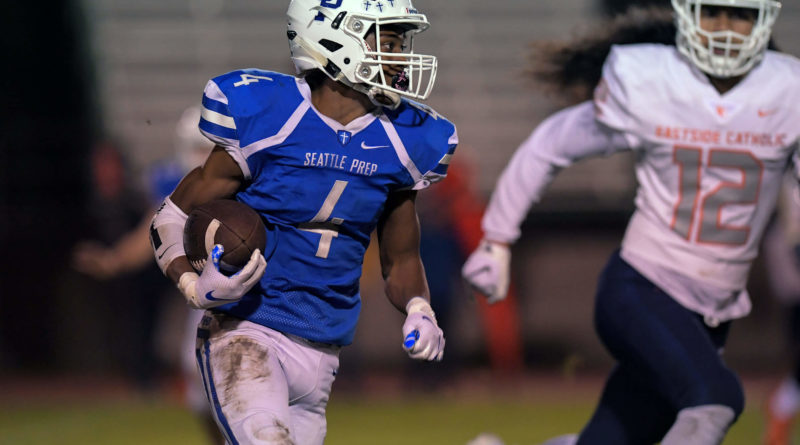 SBLive Washington is previewing the Top 50 high school football teams in the state ahead of the 2020-2021 season. Here’s an inside look at the Seattle Prep Panthers of the Metro League – No. 19 in our countdown.

6-4 overall, 2-3 Metro League – Mountain (fourth place); lost to Lincoln in the first round of the 3A state playoffs.

Air Force Academy commit has good instincts and a knack for the ball that makes him stand out in a talented receiver corps.

Gifted athlete is a standout slot receiver, DB, return specialist and multi-sport athlete who has the ability to do everything except drive the team bus.

Reliable leader, Colorado School of the Mines signee threw for 2,289 yards and 20 touchdowns as a junior.

Aaron Maul can’t help but get emotional when he muses over the question that is posed to elicit somewhat of an obvious reaction.

In a shortened season, with no traditional state playoffs, what is there to play for?

On a team oozing with raw talent, one that boasts as many college football players (six) in his senior class as Maul has ever coached, it’s the times where groups of players are hounding him to hold some sort of practice — the desire to be together again on the field.

“Our identity is really going to be the unity piece,’ Maul said. “This group is really close. This is a really tight-knit group. You partner that with kids that are pretty explosive and experienced, things have started to come together.”

Let’s talk about the talent, shall we?

Of the 15 starters returning, the Panthers return nearly every impact skill position player. Multi-year starting quarterback Jake Sype has at his disposal running back Aliah Vaouli-Buchanan, who started as a junior, as well as three dynamic receivers — do-it-all athlete Braeden Smith in the slot, speedster Kendin Alexander and two-way standout Jared Roznos, as well as 6-foot-5, 225-pound target Jack Velling at tight end.

And its offense returns three starters on the line, with several more waiting in the wings that will press the starters for snaps. What they lack in college-like size on the line, the Panthers make up for with rangy, athletic frames.

The question becomes, how will the Panthers stack up with the class of the Metro League – state powers such as Eastside and O’Dea? Time will tell, but they appear as equipped as they’ve ever been to do so.

“O’Dea wants to fight you in a phone booth and that’s not good for us, we’ve got to get you out in space,” Maul said. “Eastside can go both ways.”

“We are very hopeful we will play and those participating will take it upon themselves to keep each other and our family’s safe.” —Aaron Maul