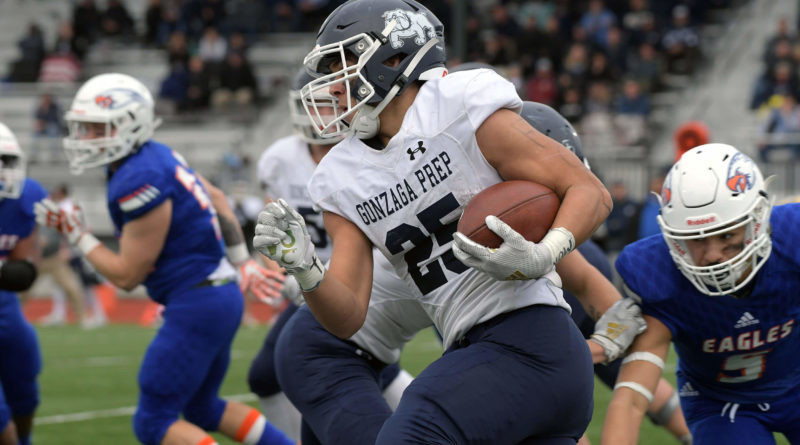 SBLive Washington is previewing the Top 50 high school football teams in the state ahead of the 2020-2021 season. Here’s an inside look at the Gonzaga Prep Bullpups of the 4A/3A/2A Greater Spokane League – No. 17 in our countdown.

7-3 (second place in GSL); lost to Graham-Kapowsin in 4A first round.

Elusive triple-option signal caller is not only slippery, but if given a lane, he will bowl you over.

Strength of this defense is in middle layer, and this high-energy hitter leads the ferocious pack.

After emerging from the rough-and-tumble as the GSL’s top 4A squad in 2019, this underclassmen-heavy group made a spirited entry into the state playoffs.

Defeated? Nah. All that setback did was provide 15 months of motivation to a program that is the league favorite in 2020-21 – and moving forward.

“The younger kids saw that and knew we had to be better than that,” Gonzaga Prep coach Dave McKenna said.

This is a triple-option that is not only frustrating to prepare for, especially since it is rarely seen in the 4A ranks, but once it gets going, it is hard to slow down.

The longtime coach looks at his backfield, led by his son Ryan McKenna at quarterback and returning all-4A GSL running back Jaden Ortega, and sees similarities to the one that led the school to the state title in 2015.

Throw in the other running backs in the rotation – junior Robert Collier and sophomore Nick Bankey – and there is so much variety in the Bullpups’ run game, it will be difficult for defenses to get a beat on it.

“It’s not just the triple option, but we can run iso or sweeps,” Dave McKenna said. “We might read you, or we might block you. And that makes it tough on a defense.”

And just went defenders start creeping in, the Bullpups intend to let Ryan McKenna throw it a bit more as a junior. He brought home a net and spent hours throwing passes into it.

“He’s heard he wasn’t very good at throwing the football,” the coach said. “He is very competitive.”

The defensive front took a huge hit when junior defensive end Kaz Melzer suffered a serious knee injury last spring while running, and is expected to miss this shortened season.

But Ephraim Watkins and Luke Miller should be good run pluggers at defensive tackle, and there will be linebacker-types all over the field in space, led by the ever-reliable Daniel McKeirnan.

“He is pure energy with a good football IQ,” Dave McKenna said.

“It makes it difficult to do the things off of the field that help develop these men into leaders for the community. The lack of opportunities for community service, meals together and team gatherings have had a huge impact on our program.” – Dave McKenna