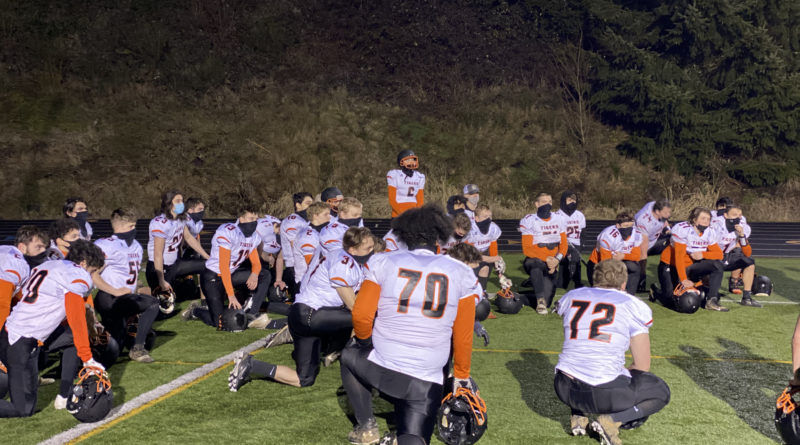 KALAMA — Recent history between the two programs is fraught with postseason drama, but on Saturday night, Kalama and Napavine weren’t meeting with the season on the line.

The Tigers were vying to save face after getting thrashed by Onalaska in Week 1. For Kalama, it was the season debut, and the hope to regain its legs after a microwaved preseason.

Both teams picked up where they left off with one another in the double-overtime 2B state semifinals in 2019.

Asked how he ran for more than 200 yards, Napavine quarterback Laythan Demarest didn’t hesitate with his answer.

Keith Olson, Fernando Gaona, Deven Searles and the rest of Napavine’s big, physical offense line that created gaps for him to exploit.

The Tigers won the game at the line of scrimmage both ways.

“They’re big up front,” Kalama quarterback Jackson Esary said. “They won the game at the line of scrimmage.”

Survival in the Central 2B league, the state’s toughest B league, requires a short memory week to week. Case in point: After opening on the road at defending 2B state champ Onalaska, Napavine had to turn around and play Kalama.

But after getting throttled by Onalaska in Week 1, Napavine couldn’t put the loss behind them.

All week in practice, the sting of losing 38-0 lingered. They were, in their own words embarrassed.

So they channeled it into a great week of practice. And a rebound performance.

“You get popped in the mouth the way Onalaska popped us in the mouth, you’ve got two choices,” Fay said. “You either respond, or it turns into a really miserable season. And I thought our guys responded really well.”

Said Demarest: “We came out, we hit more and we had the energy going, and it showed tonight.”

Big-play quarterbacks went blow-for-blow with one another

Kalama’s 2B state runner-up team from 2019 was relatively young, and they brought back much of the offensive fire power that landed them in the title game.

That starts with Esary, a 6-foot-2, 205-pound three-star dual threat quarterback, per 247 Sports.

Esary was spectacular. He rushed for 154 yards on 13 carries, completed 18 of 33 passes for 210 yards passing and accounted for four total touchdowns, including a 64-yard run in the second quarter.

Demarest may not have the recruiting buzz, but he was every bit the playmaker, turning 27 carries into 236 rushing yards, 75 yards passing (4 of 6) with three touchdowns and no turnovers.

His 73-yard touchdown run with 6:13 left in the third quarter gave the Tigers the lead for good (and he tipped an off-balance Esary shovel pass to Gavin Parker that turned into the game-sealing pick-six).

“He had some nice craft cuts in there, and he was patient, which is something we’ve worked on for four years — being patient and finding the hole.”

Kalama’s firepower was a driving force behind its three consecutive 2B state title appearance.

If there was anything the Chinooks can glean from the season opening loss — with only one day of real hitting to prepare, according to Esary — it’s that they have playmaking.

That starts with Esary, who made plays on his feet and in the air,.

As good as it felt in the moment, Fay knows better than to overthink the win. After all, the Tigers beat Kalama in Week 2 of the 2019 season, and the Chinooks ended their season in the semis.

“This is Kalama’s first time out on the field,” Fay said. “I know if we play them down the road they’ll be a lot better. We’ll take it, we’ll take the experience of one game and learning experience, but they’ve got a really good football program.

“That’s kind of been a signature of ours since I’ve been here is being able to put those drives together in the second half,” Fay said. “So that was really nice to see these guys go out and execute.”

The death blow came on the next drive when Kalama was trying to advance the field quickly. After spinning out of a collapsing pocket, Esary tried to shovel the ball to a receiver tracking back as he was being pulled down.

The pass was tipped by Demarest, and fell into the hands of junior linebacker Gavin Parker, who ran it back 73 yards for a touchdown to push the lead to 17 with 2:42 left.

“I was so hyped, I thought I had it for a second and I tipped it up and he got it,” Demarest said. “I was cramping … but it was an amazing feeling knowing that we came up big.’