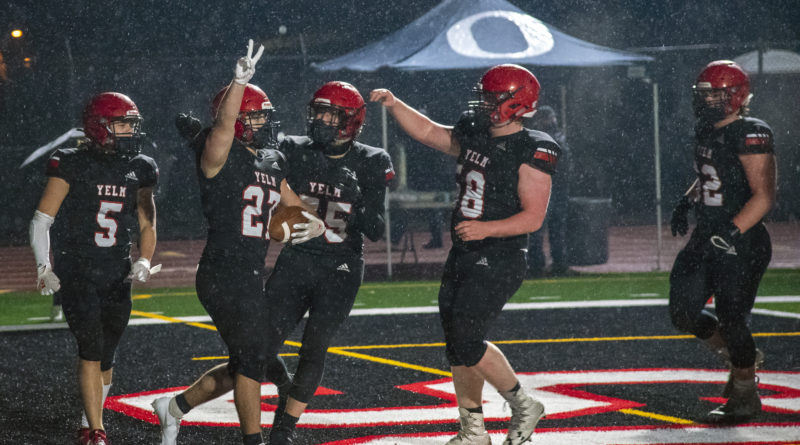 Senior running back and linebacker Sean Roewedder made his presence felt early, scoring on a 65-yard touchdown run on the first play from scrimmage. He made a fourth down tackle at the end of the first quarter and Roewedder added a 17-yard TD run in the third quarter, trucking an Olympia defender just before the end zone. Every run was tough and he was no easy tackle for the Olympia defense and Yelm used a few different running backs, but expect Roewedder to get the rock more often than not this season.

Olympia sophomore Gabe Downing and Yelm junior Nathaniel Paul both had good debuts at quarterback. Paul had two TD passes and Downing had a 95-yard TD pass in the first half. Downing had an early fumble while Paul played a clean game, but both players had good velocity on their passes and neither threw the ball to the wrong team. The running game wasn’t working for the Bears so they had to rely on the arm of Downing, who couldn’t quite generate enough offense for Olympia to make the game close, but both defenses played well and were a good early test for both first year starting quarterbacks.

While the score may not indicate it, the Bears went up against a good Yelm offensive line and were able to get some pressure on Yelm quarterback Nathaniel Paul. Seniors Jason Sipe and Keaoni Tuitele and junior Hunter Irish were the main rushers in the Bears’ base 3-4 defense and they look to only get better as the season continues. On the Yelm side, they were not allowing the big plays (other than one) and had constant pressure, with Logan Platt recording the lone sack in the game for either team. Yelm senior Marky Liburdi also had a nice game at defensive end and the linebackers, led by Roewedder, did not allow the Bears’ running game to produce much offense.

Twister in the Trenches

Yelm’s offensive line had a great game, led by left tackle Dylan Jemtegaard. The 6-foot-4, 315-pound senior was sure to set the edge or push through his defender when the Tornados needed a few yards to gain a first down. While the Olympia defense was good, there was no match for Jemtegaard on the Bears, and it showed in both passing and rushing. He is the best player on a stout offensive line for the Tornados that opened up some big lanes for Yelm running backs.

It is the first year for Olympia head coach Nick Mullen and his staff. The Bears’ have plenty of talent and held their own against the Tornados until it got away in the second half, but there were some positive things Olympia can take away from this game going into their next game against Timberline. The Bears played great defense in the first half and if it weren’t for the late touchdown by Yelm for a 16-7 lead at halftime, this game could have turned out much differently.

The Rust is Real

The players weren’t the only ones in their first game. The officials threw plenty of flags throughout the game, with the most popular calls being offsides, delay of game or a block in the back. Most of the calls were legitimate and both teams looked like they hadn’t played a down in more than a year. The rust came off as the game progressed, but the game lasted almost three hours because it seemed like there was a penalty every three plays. Expect a lot of penalties in the first few games for both teams as they get acclimated to game speed.