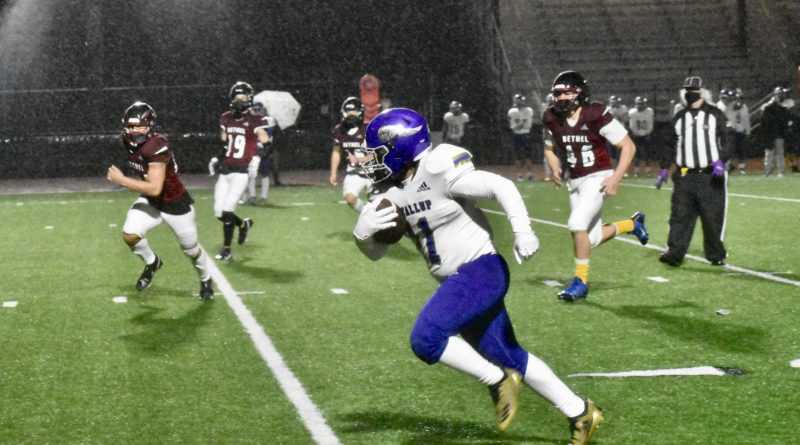 And at Art Crate Field on Friday night, the 4A South Puget Sound League debut went off without a hitch, but with a consistent torrent of sideways rain.

Welcome to the Ziere Ford show

Ford will be the first to tell you his five touchdown outing was not the most he’s ever scored in a game.

In seventh grade, he says he scored six or more touchdowns per game regularly.

The stage on Friday night was substantially larger. And there was no keeping the 5-foot-7, 200-pound Ford out of the end zone.

“It felt good to be on the field for the first time in a long time,” Ford said.

As a sophomore, Ford was one of three running backs Puyallup rotated in. As the season went on, his load gradually increased. With the other two backs graduated, Ford was tapped as the Vikings’ starter. In his first start Friday, he answered the call, outgaining Bethel’s entire offense in the first half.

His last two touchdowns were back-to-back four-yard runs in the third quarter to put the game away.

“He’s kind of our guy,” Puyallup coach Gary Jeffers said. “He runs so low, he’s got that little quick shift step and he did a great job.

In a perfect world, Bethel would have started the season to a roaring crowd on a warm Friday night in September. Instead, the Braves opened the jump-started season on short notice with no fans — aside the few that whooped and hollered from outside the fence.

And the Braves had a the type of slow start befitting a group onboarding a heap of new starters with two weeks of practice and no traditional offseason.

With just over five minutes left in the first quarter. Pinned inside their own 10 and facing 4th and 25, the Braves sent an errant snap flying over the head of quarterback Kekoa Visperas and into the back of the end zone for a safety. Before they knew it, Puyallup had taken a 19-0 lead.

“There’s a lot of new guys, young guys who have never stepped up on the big stage before,” Visperas said. “Especially for our first game, 12 practices total going into it to be on the field in pads, it’s (a tough spot for) young guys to perform at such a high level like that.”

But Braves went into the half with a little life, thanks to its speedy, sure-handed quarterback.

The Braves drove most of the field, before Visperas evaded three defenders, escaped a collapsed pocket and scampered in for an 18-yard touchdown run to put Bethel on the board with 35 second left in the half.

That momentum carried into the second half.

After junior corner Jaedon Moody picked Puyallup QB Luke Holcolm and put Bethel on the opposing 28 yard line, Bethel scored on a 17-yard run from sophomore Salamo Filimaua — on a drive kept alive by a how-did-he-do-that off balance throw by Visperas under pressure to convert on 4th and 15.

“We have a lot of things to fix as a team,” Visperas said, “but I think we’ll be fine.”

David Iuli was all smiles in the postgame. Friday’s start was a long time in the making.

It was his first game in more than two years.

He’s a 6-5, 315-pound four-star offensive guard with offers from the likes of Washington, Oklahoma, Oregon and USC. And he’d like show those schools what he can do on the O-line, now that he’s all recovered. Iuli underwent surgery for a torn lateral meniscus. He missed his entire sophomore season due to complications with the surgery. And his long wait to a return was made longer by the pandemic.

“Man, it’s a great experience,” Iuli said. “It feels great, two and a half years away from the game just made me even more hungry. And they’ll see the highlights, no worries.”

He rejoins an offensive line that is the team’s strong point. On Friday, it gave Holcomb plenty of room to operate and paved the way for Ford’s monstrous night on the ground.

“It’s obviously huge to get (Iuli) some snaps since it’s been so long,” Jeffers said. “We’re real happy with his progress and the offensive line as a whole.”

Kekoa Visperas has seen it all

Visperas’ first start as a Bethel Brave was the 2019 season opener.

His experience leading up to the season-opener was anything but smooth.

After transferring from Eatonville, he spent the entire week leading up to the game out of the team’s game plan while appealing his eligibility with the WIAA. Hours before the kickoff, he learned he’d become eligible, and he’d be starting against Kennedy Catholic at Century Link Field on national TV.

“That was one of the craziest days of my life,” Visperas told SBLive in September.

Now Visperas, who signed with Eastern Washington, has two stories to tell about playing a season opener under bizarre circumstance.

Puyallup got dressed in the away stands, which were otherwise empty.

Both teams spent halftime in opposing grandstands, which served as a covered, yet cold, respite from the rainy February night.

And when the game was over (the final horn was replaced with a public address reminder of the protocols), instead of a handshake line, the teams waved a courtesy goodbye and good game from one sideline to another.

Playing football for the firsst time in the coronavirus pandemic made for anything but a normal spectacle. But ask the players, being able to play was an opportunity they’d long hoped for — one many thought might not ever come.

“I was telling the guys on my team and the other team, let just go out, have fun and stay healthy — no injuries,” Visperas said. “This is just for fun at this point. For me and the senior leaders on this team, we’re going to college. Our goal and mentality is to help the youngins, make sure they’re set for years to come.”