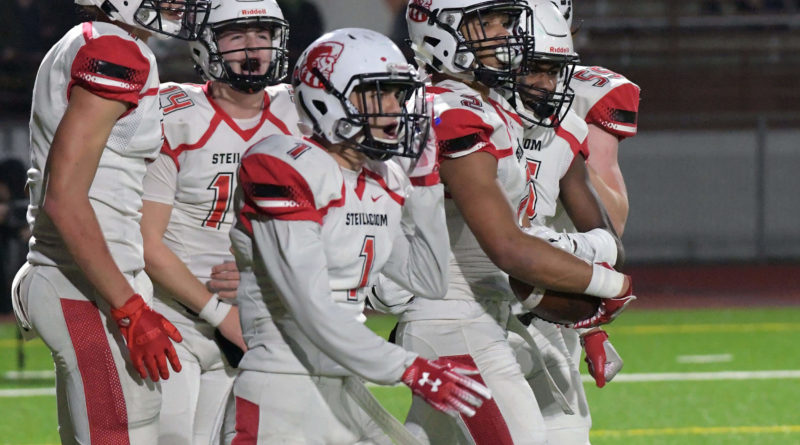 SBLive Washington is previewing the Top 50 high school football teams in the state ahead of the 2020-2021 season. Here’s an inside look at the Steilacoom Sentinels of the 2A SPSL – No. 24 in our countdown.

Last season, he set school passing records with 3,812 yards and 49 touchdowns. And he is even more decisive now.

Oh, those Sentinels were so close.

After rumbling through the Class 2A state playoffs in 2019, the talented team from Pierce County advanced to its first state title game, only to get beat by a program with more tradition – Tumwater.

“Tumwater has taken up a lot of my train of thought through the offseason,” coach Colby Davies said.

Davies hopes this rivalry extends past this shortened season – and is taking steps to make sure that happens.

Yet, he doesn’t want to give up on the winter reboot, especially with Western Kentucky signee Chance McDonald leading the Emeka Egbuka-less passing offense.

With the five-star Egbuka now in the Ohio State receiving corps as an early enrollee, McDonald welcomes a new addition as a pass catcher – Arizona signee D.J. Fryar, who was a running back last season.

“He is so talented and is such a good athlete,” Davies said. “I just thought that would be a switch that is good for us.”

Which is also an indicator that the Sentinels – with Davies as the new offensive play-caller in place of departed Greg Herd (new Auburn Riverside coach) – will throw it even more frequently in 2020-21.

After the Sentinels were pushed around by Tumwater’s Wing-T rushing attack, Davies had concerns if the team could reload up front. It has, and the coach feels as if they could be even better, led by 2A SPSL defensive player of the year Judah Jackson at strong-side end, and the return of injured defensive tackle Sam Stowers, who could evolve as the program’s top big man in quite some time.

And adding injured returner Lance Garcia and Curtis High School transfer Marcus Cooney to the inside-linebacking group gave Davies a reason to move Fryar – the team’s all-2A SPSL linebacker – back to free safety to give the back level a better physical presence.

“Against that Wing-T, we had to get better,” Davies said.

“It’s taken its toll on our guys. It’s been great to be practicing in some way, shape or form since the end of November. Obviously, because of COVID, we don’t have our leader and one of the state’s best players in Emeka, but we are grateful to be together and practicing with hopes of starting the season (in February).” – Colby Davies