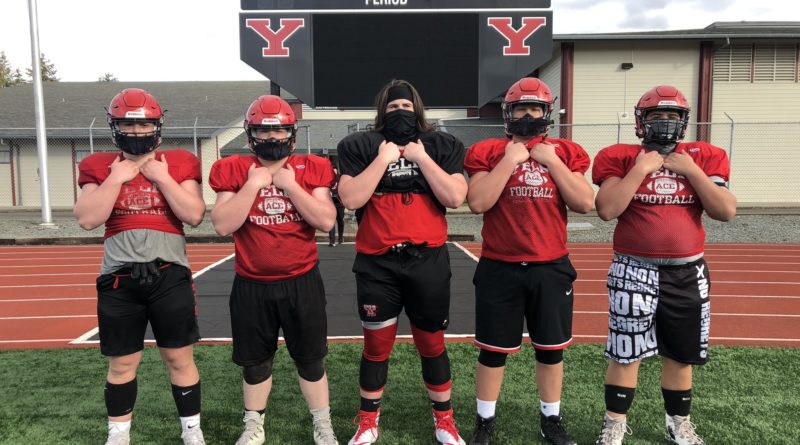 SBLive Washington is previewing the Top 50 high school football teams in the state ahead of the 2020-2021 season. Here’s an inside look at the Yelm Tornados of the 3A South Sound Conference – No. 23 in our countdown.

All-conference lineman is a Central Washington commit and one of three starters on the line.

Three-star guard is a California commit, and the anchor of a big, experienced offensive line.

Skilled, physical two-way athlete with a wrestling background started on defense as a freshman, and has put on 20 pounds in the offseason.

Yelm proved it belonged among the state’s upper-tier by driving halfway across the state as a double-digit seed and taking Kennewick to overtime in the first round, on the back of a strong offensive line and fearless quarterback.

In 2021, the Tornados bring back every bit the grit.

Where departed signal caller Ben Hoffman was dependable running the option, and could run over defenders, junior Nathan Paul boasts a big frame (6-3, 205 pounds) and a strong arm.

Between playing consistent 7-on-7 tournaments with Yelm teammates in Portland and Vancouver throughout the shutdown and one-on-one work with a QB coach in Puyallup, coach Jason Ronquillo calls Paul’s offseason jump “a season within a season.”

Yelm remains in the South Sound Conference, but will play a more localized schedule as the league adds neighboring Olympia and loses Gig Harbor and Peninsula, since it’s located in the West region of the state’s COVID-19 reopening plan.

For Yelm players, that means they’ll face more familiar faces. Many grew up playing against Olympia players — the school’s Week 1 opponent, in youth football from second through eighth grade.

“Once we got to high school we never got to play those guys, so there’s a little nostalgia,” Ronquillo said.

With a mid-February start, the Tornados feel ready for a shortened season that starts with just two weeks of on-the-fly preparation — a problem facing every team to some degree.

“There’s never enough time to get it in and work out every wrinkle,” Ronquillo said. “But we’ve got the same amount of time other staffs do. I like where we’re at.”

“We’ve been fortunate to have been in close communications since this all went down in March of last year. We’ve used Google classroom, teach tapes, quizzes, zoom meetings, you name it, we’ve done it. The coaching staff has been really creative with how we continued to connect with the athletes even when we can’t see them in person.” —Yelm coach Jason Ronquillo