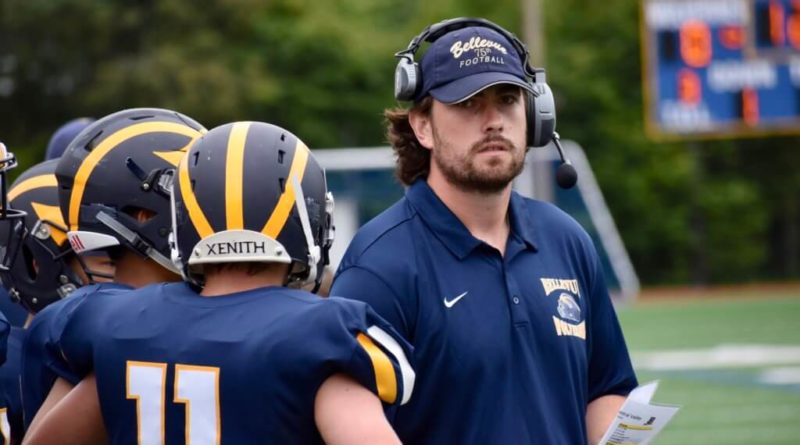 SBLive Washington is previewing the Top 50 high school football teams in the state ahead of the 2020-2021 season. Here’s an inside look at the Bellevue Wolverines of the 3A KingCo – No. 25 in our countdown.

Editor’s note: Bellevue is in the Puget Sound region of Washington’s COVID-19 reopening plan. The region has been cleared to move to Phase 2 and the Wolverines’ KingCo-specific schedule is being assembled.

9-3 in 2A/3A KingCo (first place); lost to Eastside Catholic in the 3A state quarterfinals.

All-league safety last year will continue to command the back of the defense. Now, the stage is set for him to have a breakout year at running back.

Hulking presence on the defensive line is headed to play at Central Washington after one final run disrupting KingCo O-lines.

Third-year starter at QB has stepped up during the shutdown as a proxy-coach, earning high praise from Kneip.

Much of the current coaching staff saw Bellevue’s history of dominance firsthand.

Michael Kneip enters his third season as the head coach for a team that runs the same Wing-T he paved the way for as an offensive lineman, and carries with him lessons he learned wearing a Bellevue uniform (and winning four consecutive state championships as a player from 2008-11).

The long pandemic-induced offseason cause Kneip to fine-tune things. So he’s taken a few pages out of another playbook on how to run a program — that of former Washington coach Chris Peterson, his college coach who he exchanges texts with regularly.

“He’s got an amazing mind, we’ve been friends for a long time,” Kneip said. “He’s given me so much good advice. We have the same philosophy … we’re really life coaches disguised as football coaches.”

That’s why Kneip has ceded his duties as offensive coordinator to Morgan Richey, who was an all-state lineman for four straight state titles (and three consecutive undefeated) Bellevue teams, including the 2012 ESPN national championship team.

Stepping back from play-calling will allow Kneip to work more directly with players.

And on a team coming off of a 3A quarterfinal run that graduates nine all-league players, Kneip plans to work a lot with his young offensive line.

“Fundamentals is the deal right now,” Kneip said. “If you can block and tackle, you’re going to be ahead of a lot of teams. The simpler you make the game, especially in a season like this, it’s going to help us out a lot.”

The Wolverines are more grizzled under center, where multi-year starter Bryson Sleeper returns at quarterback. He’ll be handing the ball off to Dan Marino, an all-league safety who is poised to shoulder a much bigger load running the ball.

“This is the best group of leaders we’ve had,” he said.

“You really learn about the impact for kids, how important sports are and how important hope is to give kids something to look forward to. It’s given us as coaches a chance to ask ‘why are you doing this?’ Are you here to coach football at Bellevue High?’ … if you’re not here to serve kids, love kids and make kids better humans, this is not the place for you. Then from the kid’s standpoint, just missing the game, the interactions and the special moments — appreciating the time you do get together has been really amazing.” —Head coach Michael Kneip