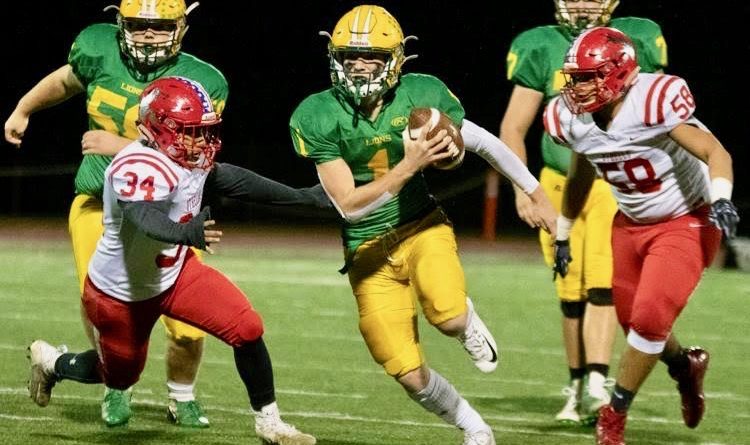 SBLive Washington is previewing the Top 50 high school football teams in the state ahead of the 2020-2021 season. Here’s an inside look at the Lynden Lions of the 2A Northwest Conference – No. 34 in our countdown. (Feature photo by Hailey Palmer/Lynden Tribune.)

Editor’s note: Lynden is in the North Region of Washington’s COVID-19 reopening plan. The North Region will move to Phase 2 of the plan on Monday, Feb. 15, which means moderate and high risk high school sports have been cleared to return to competition. Lynden’s first game is scheduled for Feb. 20.

9-3 (second place in 2A Northwest Sky); lost to Steilacoom in the 2A semifinals.

Improved so much in the offseason, coaching staff believes he is best passer at school since Sterling Somers.

Arguably team’s best athlete, Jandoc bulked up and will move from cornerback to both safety positions.

Might not be the workhorse 40-carry threat Steven DiLorenzo was, but Lions expect him to catch a ton of passes.

Had there been a Class 2A state playoff format this winter, these eight-time state champions would have, once again, been on the short list of teams that had a legitimate shot at dethroning Tumwater.

As it stands, coach Blake Van Dalen will showcase a large roster of big linemen and speedier skill-position players in navigating a difficult Northwest Conference slate of games.

The catalyst is Baylor Ayres, a dual threat who will not only aid the rushing attack without the graduated Steven DiLorenzo, but has also spent countless hours working with passing guru Steve Gervais, the former Skyline High School coach (and Oregon State quarterback).

That is why the Lions are equally counting on Ayres distributing the football to a better set of perimeter players, led by Kaleo Jandoc, who occupies the team’s do-everything ‘Z’ wide receiver spot.

Lynden has utilized a two-quarterback system in recent years – Ayres teamed up with Brock Heppner a year ago under center – but Van Dalen said with fewer practices because of the pandemic, he expects his senior to be the full-time guy (with backup Cade Slayton, a junior, moving to tight end).

What separates the Lions from other 2A contenders as arguably the best threat to big-and-bad Tumwater is their size on both lines, led by Matthew Furdyk at center, and Christian Bethea, a Linfield College recruit, at left guard.

On the flip side, the Lions also have bulk on the defensive line. And even though they are young in the secondary, Jandoc and Ayres should stand out as the starting safeties.

“We have 108 guys out. Even with COVID, our numbers have gone up.” – Blake Van Dalen