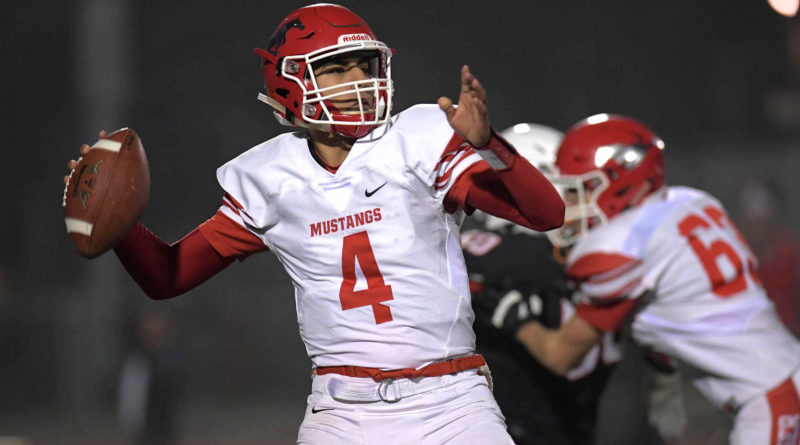 SBLive Washington is previewing the Top 50 high school football teams in the state ahead of the 2020-2021 season. Here’s an inside look at the Prosser Mustangs of the 2A CWAC – No. 40 in our countdown.

Editor’s note: Prosser is in the South Central Region of Washington’s COVID-19 reopening plan. The region is still in Phase 1 of the plan, which means moderate and high risk high school sports have not been cleared to return to competition. The earliest they could move to Phase 2 — and start their season — is Friday, Feb. 12.

8-3 (first place in 2A CWAC South); lost to Steilacoom in the 2A quarterfinals.

Athletically, this highlight-reel dunk master is already considered one of the school’s all-time top pass catchers.

In effort to improve girth on defense, this reshaped two-year pass rusher moves to weak-side linebacker.

High-voltage trigger man will be motivated to prove that off-kilter showing against Steilacoom was a fluke.

If its 2019 season had lasted one more week, Prosser would have sent TMZ-type shockwaves through the Class 2A state playoffs.

If the Mustangs had gotten by Steilacoom in the state quarterfinals, Hadenn Hicks – who “retired” from football after breaking his collarbone at quarterback in the first game of the season – would have returned to the lineup as a wide receiver.

That didn’t happen – Steilacoom won. But it was a sign of things to come as Hicks’ return this season gives the Mustangs a top state billing – and a safety valve for the emerging Kaiden Rivera.

“Their rapport in the offseason has been tremendous,” coach Corey Ingvalson said.

Hicks is a unique talent – wherever he lines up. And Ingvalson will move him all over the formation to get him in favorable matchups. He has the strong hands and long arms to come up with contested catches.

“The (Steilacoom loss) has given teams a blueprint out there to stop our passing game,” Ingvalson said. “So we have to put in more man beater (routes) … and Haden helps close that gap.”

The other lesson learned from the state playoff loss was that the Mustangs needed to get more physical on defense. So to give the front seven more size, he moved some defensive linemen, including Eric Martinez, back to linebacker.

“He gives us a 60-pound jump in size at our “Will” linebacker position,” Ingvalson said.

Ingvalson said this has the making of his best team since his debut season in 2015 when the Mustangs won the 2A title over Tumwater.

“It took a long while to get approved to any type of workouts. It’s been a long time away from players.” – Corey Ingvalson