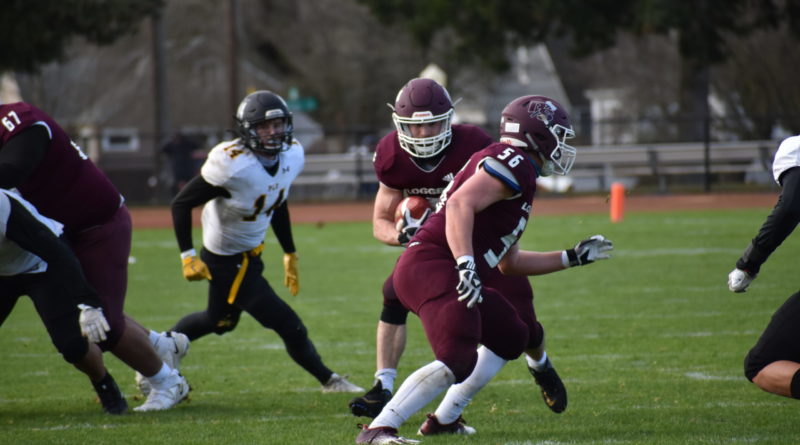 Maybe an all-Washington football encounter during the pandemic was never meant to happen on time.

The two in-state Pacific-12 Conference schools tried to hold their annual rivalry in late-November. But COVID-19 wiped the Apple Cup right off the schedule.

Nearly three months later, two other Washington universities – the University of Puget Sound and Pacific Lutheran University, NCAA Division III members of the Northwest Conference – got the go-ahead to play a game in February.

And on a cold and blustery afternoon Saturday, everybody won – the game went off without a hitch. And the host Loggers prevailed, 28-20, at Baker Stadium in Tacoma.

With WIAA football games expected to begin next week, programs can relate to the wait the Loggers and Lutes had in between games – 448 long and winding days.

“I had a lot of doubts (a game would be played), I am not going to lie to you,” said PLU defensive end Tristan Thomas, a Woodland High School product. “A lot of things had to fall into line, and we did the very best we could following all of the stuff to stay safe.”

PLU forced four first-half turnovers, including two of them on special teams, to grab a 14-7 halftime lead. Fife High School product Wesley Nixon scored all three touchdowns for the Lutes.

The game – and the setting – was far from ideal Saturday. Miscues were made from both teams. Rust was the game’s predominant shade.

“We both looked exactly as I expected,” UPS football coach Jeff Thomas said. “If you took that film and played it into next fall at any point of the season, we’d both be really, really really frustrated.

“But with all the social-distancing practicing both of us did in the fall, and with no real spring preseason … we both competed, and it came down to a one-score game.”

Both coaches credited the leadership of their respective university presidents in keeping the dream of a Northwest Conference season alive for not just themselves but all student-athletes.

And on Monday, players and coaches woke up to a feeling they had not felt in nearly 15 months – game week.

“It was nice to have an actual opponent to game prep on, and not just focusing on protocol … spacing, pods during practice and all of that,” Tristan Thomas said. “We both, I thought, had great energy.”

Jeff Thomas said it did not hit him that a game was on until Friday.

“On the game field for a walkthrough – that was my moment of like, ‘Oh wow, here we go!’” Jeff Thomas said.

Game day was nowhere close to normal: Fans were not allowed to attend the game (although 20-30 followers of both teams lined up and watched from the outer fence).

Teams were not allowed to use locker rooms, instead holding pre-game and halftime meetings in the stands or on a nearby field outside the stadium.

And UPS honored its 16 seniors before its season opener, not the usual home finale.

“My mom and dad I know are always in the same spot in the stands, and I can look to them, so that was super weird they were not here,” said UPS quarterback Murdock Rutledge, a former Everett High School standout.

“The atmosphere – the sounds and yelling – was different, so our sideline had to supply a lot of that.”

But, in the end, two college rivals with a combined 94 players from Washington high schools got to play each other in an official game.

“We addressed it with the players a couple times, telling them to take a deep breath and be grateful for today,” PLU football coach Brant McAdams said. “A lot has gone into this: Individually, (players and coaches) made sacrifices. But there were also so many hours behind closed doors of people planning, and readjusting plans as we went.”