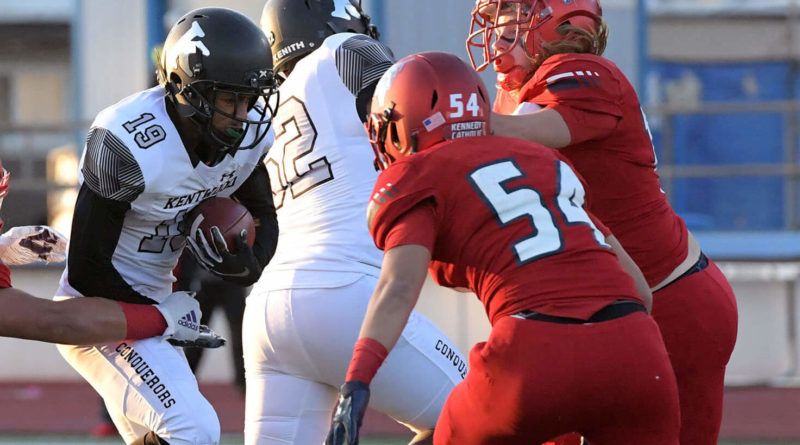 Sure, he knows all about what his father, Ink, accomplished in football: All-American team captain at the University of Washington, and former NFL starting linebacker for the New Orleans Saints.

He is even teased about who have won state high school championships from his household: His late mother, Kelli, did in basketball in Hawaii; and his sister, Malia, did in volleyball at Kennedy Catholic before becoming an All-American setter at Western Washington University.

Even surrounded by all of that family goodness, Aleaga knows still he has to be true to himself – and is betting on having a banner next-step football career after signing his national letter of intent Wednesday to play for the Eastern Washington Eagles in Cheney.

“I was a basketball player growing up, but during my freshman year (at Kennedy) when I came out as No. 54 (for football) – the expectations then came with it,” Aleaga said.

“My dad has kept harping on me, ‘You’re not me, you are you.’ He told me to be me on the field, be me at school … and I have found a real balance in that.”

Aleaga did not find football until ninth grade. And when he arrived, he was a 5-foot-10, 150 pound ‘C’ team wide receiver.

Even after he eventually moved to inside linebacker, Aleaga was slow to hit a growth spurt physically.

“Let’s be honest, if he was 20 pounds heavier two years ago (as a sophomore), he is probably a national recruit,” Kennedy Catholic football coach Sheldon Cross said. “Now, he is a steal.”

Aleaga came on as a junior, and had gotten to 190 pounds late in 2019 before joining the school’s basketball team.

“Basketball is a good refresher for me. And it is fun,” Aleaga said. “But right after basketball, I kept lifting.”

By the time spring time rolled around, he was 195 – and received scholarship offers from Montana State and EWU. He visited both campuses on his own.

And last week, after Jeff Choate left Montana State to become the linebackers’ coach at Texas, that was the final straw in his decision. Aleaga contacted Eagles coach Aaron Best and said he was fully committed to join that program.

“I am glad those coaches see my potential and ceiling, and I am thankful for that.”