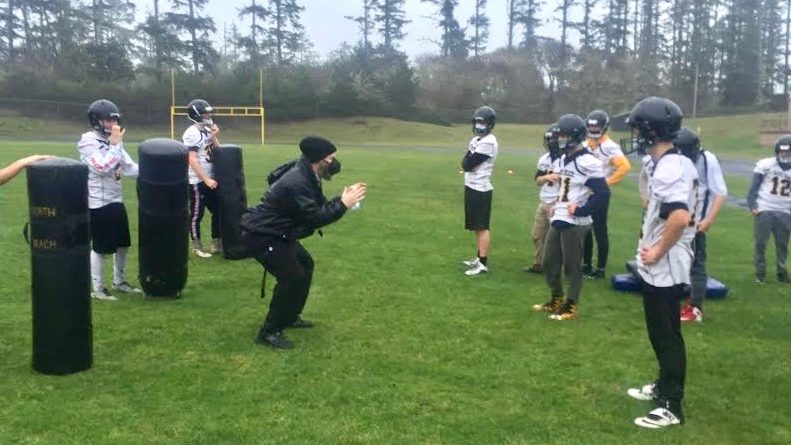 His biggest worry? Making sure his players’ helmets were ready for action. And he inspected them over and over.

“It’s been some sleepless nights, because you want to make sure everything is organized, and make sure all the foundational stuff is done so it can go smoothly,” Moodenbaugh said.

Of course, the first day of preseason training camp never goes smoothly. But considering his players were off for more than a year – since late in 2019 – he wasn’t nit-picking.

“We were missing it quite a bit actually,” Hyaks defensive end Westin Fruh said.

High school programs in Snohomish, King, Pierce, Thurston, Lewis, Pacific and Grays Harbor Counties were eligible to return Monday to full practices for WIAA football because they had reached Phase 2 in the state of Washington’s recovery plan from the COVID-19 pandemic.

And with games scheduled two weeks from now for a few leagues, there isn’t time to waste.

Heck, there isn’t a whole lot of time just getting used to the feel of wearing a helmet again.

“It was nice wearing it, but it hurt, though,” said Fruh, who is also a two-time Mat Classic participant in wrestling. “Kind of bittersweet.”

Approximately 20 players reported for the Hyaks’ first practice in the Class 2B ranks Monday under dark skies and drippy conditions.

It mattered little players were slipping and sliding in drills, or their uniforms were muddy a few minutes into practice – football had returned. Finally.

“That was probably the healthiest atmosphere I’ve ever seen out there. I’ve never seen guys so stoked to get out and do something,” Fruh said.

“We are going to put in the work. We are motivated. You don’t know what you have until you lose it – and we lost it for a little bit. And we know we want it back.”