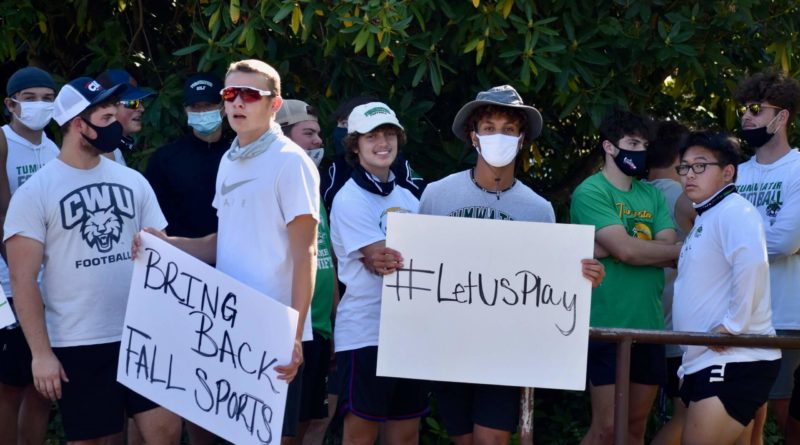 Editor’s note: Dave Tikker, the executive director of the Washington Secondary School Athletic Administration Association (WSSAAA) and co-chairman of the Class ‘B basketball tournament in Spokane, presented this letter to the board Wednesday about the shutdown of high school sports in Washington.

“As I sit here in my home in Spokane, hoping for a timely return to school and activities, it’s hard to maintain a positive attitude about where we have been and where we are going as a state. Businesses such as restaurants and gyms have been shut down, most schools are in virtual learning mode, and the extracurricular programs attached to the schools are on hold.

The WIAA has been working incredibly hard trying to paint a positive picture of season revisions that are supposed to take place, starting in February. The real problem with that scenario, though, is the WIAA isn’t a part of the state decision making process and it should be. The WIAA has access to all the latest research, data, and studies done by the NFHS and other educational entities. Apparently, the data shared in our country has convinced 45 states that it is relatively safe to participate in high school sports. Why not Washington?

For those of us here in Eastern Washington, it is extremely frustrating to watch our neighbors in Idaho safely manage being in school and participating in fall and winter sports.

According to the National Federation of State High School Associations, there are only six states in the country that have yet to play high school sports this year and Washington is one of them, to the dismay of thousands of student-athletes, their parents, and families. A high school senior in Eastern Washington must feel incredibly frustrated and forgotten about when they see in the paper North Idaho all league teams from fall sports. How do student-athletes and their families come to grips with opportunities lost when other states are participating?

Of the 50 states, 51 if the District of Columbia is included, 45 states are allowing their student-athletes to compete. Those six states that are not, Hawaii, New Mexico, District of Columbia, California, Oregon, and Washington, are either smarter or stuck in a controlling bureaucracy that doesn’t allow for input by the student activity professionals, NFHS, WIAA and member schools. All our lives educators have operated under the guise of best practices and current educational data. According to the University Of Wisconsin School Of Medicine Study research, led by Dr. Andrew Watson, researchers surveyed 207 schools that started fall sports in September, representing more than 30,000 athletes, more than 16,000 practices, and more than 4,000 games. The survey found 271 athletes contracted the virus but only one case was attributed to participation in sports. Dr Watson’s team released another study that found 70% of athlete’s surveyed reported moderate to severe depression and physical activity levels were 50% lower than before the pandemic.

In the states that are participating in activities, the governors have left it up to the local schools and communities to manage their Covid numbers and make local decisions about being in school and participating in sports. There are guidelines that come from the state and the districts allow competition, based on meeting those criteria. The State of Washington could be one of those states, but sadly we are not. Why are we so different? The real suffering is coming from thousands of our student athletes who just want to be with their teammates and experience the joy of competition.

I have spoken to athletic leaders throughout our country as to the many levels of frustration they are experiencing, navigating the pandemic waters. Yet, navigating it they are and the kids are receiving the benefits from those programs in 45 states.

What are we missing in Washington? Are we following the science and the data that is relevant to our student-athletes’ needs? Are we the smart ones? Have those forty five states suffered from making those participatory decisions for their student athletes?  Data would suggest a clear road map for a safe return to sports and yet our state seems to be stuck on hold.

Out state leaders have identified four metrics for opening up our state. The positivity test metric is really the most frustrating and detrimental to getting kids back. People are only testing if they have symptoms and the majority of those most likely have Covid. You would have to ramp up testing for healthy individuals to get that metric to line up. In other words, that most likely will keep schools from moving forward. Let’s apply some common sense to our decision making process and look at the data from successful state implementations across our country with participation.

There is a difference between knowledge and wisdom. As the old saying goes, ‘Knowledge is knowing that a tomato is a fruit; wisdom is not putting it into your fruit salad.’

Get the kids back in school and participating in activities. I don’t claim to represent all athletic directors, parents, and student-athletes with this opinion though I believe I represent their frustration.”