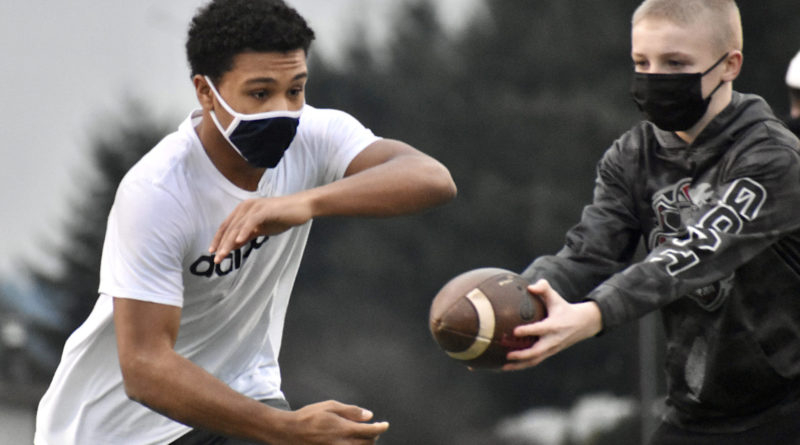 Think of it as the offbeat meaning of “blanket coverage.”

One of the Washington State Department of Health’s stipulations in the WIAA’s return to high school sports in 2021 is that most student-athletes, including football players, must wear face coverings during practices and games to limit the spread of the highly-contagious coronavirus.

And we’re not talking about a piece of tape, or a handkerchief, or even a disposable surgical mask hanging loosely around the lips.

To play football, athletes will need to cover their nose and mouth with a tightly-strapped cloth mask at all times.

“My No. 1 concern is the functionality of it,” said one WIAA football coach. “Do (the masks) work to both protect and allow athletes to compete without an adverse effect on performance.”

Two other states – Delaware (DIAA) and Michigan (MHSAA) – can best answer those questions, among other concerns, having gone through a full mask-wearing football season in the fall and winter.

“It is an absolute pain in the (butt),” said Bill DiNardo, the coach at Salesianum High School in Wilmington, Delaware. “The players hated it. I hated it. But we got used to it.”

Arguably the most important decision is choosing a suitable mask – and therein lies a big discrepancy among these three participating states for football.

The DIAA and MHSAA both approved a variety of face coverings, ranging from ones that come in direct contact with the face (lightweight, full-neck gaiters or tie-up/elastic-band fabric woven cloth masks) to others that are helmet facemask attachments (hard or soft plastic splash guards or inside-the-face-mask cloth guards).

Players in Washington can also utilize helmet facemask protection, but only as a secondary safeguard.

“We always had the neck gaiters on for practices and games, but … ended up going with the clear mask on the outside, fastened by zip ties,” said Bob Naylor, the coach at Saranac High School just outside Grand Rapids, Michigan.

“The bad thing about that mask is if it rained, or there was moisture, it fogged up, and players could not see.”

What at least that mask did was give players more room to breathe out of their mouths.

“It was a little less intrusive,” DiNardo said. “It still covered everything, but it did not cover the face directly. It seemed to be better.”

Then there is the issue of marrying the mask with the required mouthguard.

“That was one of my first questions – how do we get the mouthpiece in, especially when by rule it is supposed to be attached to the facemask?” said Ryan Love, the first-year coach at rural LakeVille High School just north of Detroit.

In Delaware and Michigan, when players opted for an inside-the-facemask covering, they generally used an unattached mouthguard.

Hypothetically in Washington, since a player will be required to wear a mask that directly covers his or her nose and mouth, an attached or unattached mouthguard can be used.

But the mouth-covering mask also, in theory, could dissuade a player from utilizing a mouthpiece altogether, since it is harder to track.

“It is kind of an honor code,” DiNardo said.

As far as the enforcement of face coverings during games, at least in Michigan, it varied depending on where you lived – and how many people were watching, Love said. Ultimately, it became more of a site manager’s responsibility, not a referee.

“When they got to the playoffs, it seemed to be enforced more because it was on the NFHS live stream,” Love said. “And at that time, it was so cold out, everybody was more inclined to keep their masks up (voluntarily).”

When it came down to it, players and coaches in Delaware and Michigan found a way to make it work, especially because their livelihoods depended on it.

“Yes, we had to remind them and ourselves numerous times (about face coverings), but less and less as time went on,” said Kurt Richardson, a Michigan hall of fame coach from Clarkston High School.

“You do get used to it. We tried to make it part of our culture with respect for others and the love toward our teammates. I think if you go at it from that angle instead of ‘we have to wear these stupid masks,’ kids will buy in.”

As WIAA’s return to sports nears, athletes in all sports, including football, can seek a mask-wearing exemption for medical reasons.

Athletes would need to get a note from their primary physician sent to the school for district approval (which is different from the DOH’s initial plan of having the doctor’s note approved by a local health department official).