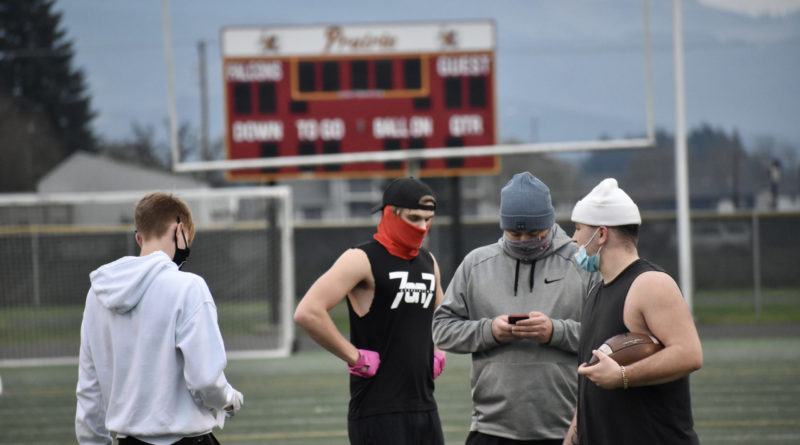 VANCOUVER — When news reached Prairie High School that football was moved to first in the WIAA’s return-to-play plans, it didn’t take long for players to see a shimmering light at the end of the seemingly never-ending tunnel.

Even if it was a green light to hold limited outdoor practices.

“I was pumped,” senior wide receiver/defensive back Logan Kimball said. “Ready to get out there, hit some kids and catch some touchdowns.”

Prairie is among the many schools across the state holding outdoor practices several days a week, with masks and in pods of six. Head coach Mike Peck got the go-ahead from Prairie athletic director Jason Castro to begin holding practices on Jan. 11.

Outside of a two-week stretch in November when practices were temporarily allowed before being zapped by a local coronavirus spike, the Falcons had not held team practice since the outset of the pandemic.

With a season potentially weeks away, Peck’s focus is making sure his team is in physical shape to start when they get the green light.

“A lot of these kids have been working on their own, which is awesome, but it’s nothing compared to being out here and getting those reps,” Peck said.

The 3A Greater St. Helens League plans to start official padded practices as early as Feb. 8, but that would require a big “if.” A full start to the season hinges on whether the Southwest Washington region can meet the coronavirus metrics required to reach Phase 2 of the state’s Healthy Washington plan. As of Friday, none of the state’s eight regions hit more than two of the four required trend-based benchmarks to advance.

Restricting practice to pods of six — no pads, limited contact and a mask mandate — presents a few roadblocks, but players were optimistic about how much could be accomplished. Peck installs a new run or pass play every practice and teaches formations.

“The biggest thing is being out here with the young men again,” Peck said. “I’ve really enjoyed it, the coaches have, but more importantly the young men have. Seeing them smile and have fun and be around their friends – nothing can replace that.”

It wasn’t long ago — some 14 months in the past — that Prairie ended a historic run. In Peck’s second season at the helm, the Falcons and its high-octane offense went 9-2, won its first 3A GSHL championship since 1992 and notched a playoff berth that ended in epic fashion —a 37-30 loss to Marysville-Pilchuck in the 3A state opening round.

Many of the pivotal pieces from that run are gone, but they’ve been replaced with players who stood in lock-step in that fight, saw what it took to get there and are determined to return to similar heights.

Perhaps no Falcon has matched the outward excitement of Peck, who has had two projected starters move out of state for a season. Senior Jaimen Farrell moved to South Dakota and received statewide recognition for his fall senior season. And sophomore quarterback Malachi Roscoe, who Peck expected to have a bright future as a Falcon, moved back to his native South Carolina in large part to not miss another high school sports season.

Peck traveled to Idaho in the fall, where a high school sports season took place, and stood on the sidelines as a friend — Gooding (Ida.) coach Cameron Anderson — won a league title in dramatic overtime fashion. He did so with a network of high school coaches around the country whose seasons had also been postponed.

During the state’s shutdown, Peck has perhaps done more mentoring than actual Xs and Os. His purpose as a coach is strengthened by text messages he’s received from players who are just appreciative to be back in a team setting.

“Everybody’s got their own mission, they all got a goal, it’s just waiting for it to happen – to come together,” Baum said.

Added Peck: “We’ve definitely learned not to take anything for granted.”