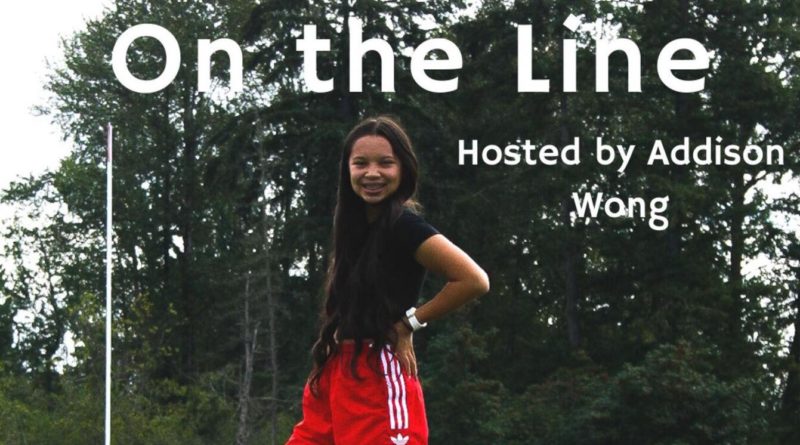 The interview began with pleasantries, which came and went before North Creek High School star lineman Koli Faaiu fielded a question that, to most athletes, is a “softball.”

How old were you when you started playing football?

Seven years old, Faaiu quipped back — eight when he first put on pads.

“Oh wow, is that kind of young? I feel like a lot of kids start with flag football first,” chimed Addison Wong, a sophomore at North Creek High School and host of the “On the Line” podcast, which she launched at the outset of the pandemic.

Not even a minute had elapsed and Wong’s line of questioning had already revealed the crux of the interview: Faaiu, a hulking 6-foot-4, 315-pound three-star Utah commit, was no ordinary athlete.

Wong isn’t your run-of-the-mill high school sophomore, either. When the last few months of her freshman year were moved online-only and much of life in her Seattle suburb was shut down because of the emerging global health crisis, she found herself with more free time than she knew what to do with. So she did what any self-motivated aspiring broadcaster would do.

She started a podcast.

Last winter, Wong was preparing to give an argumentative project on college athlete compensation. COVID-19 caused North Creek to move online-only before her assignment was due, which meant her presentation was canceled. Wong was admittedly bummed. So she ended up presenting it in her own way, as the first episode of her new podcast.

She takes her studies seriously, and balances them with competitive dance, her extra-curricular activity of choice. But with dance sidelined, Wong needed an outlet. Why not, she thought, choose an activity that will help her career aspirations?

So she combined her desire to talk about sports with her need to fill free time in her day.

“I felt like quarantine was a perfect time to step into something new because I’m the type of person who loves to be busy and to feel productive,” Wong said. “I thought that podcasts would be a fun way to do that safely … You don’t need a ton of technology and a bunch of fancy equipment to start, and I love listening to podcasts.”

Through instructional YouTube videos, Wong found that most of the technical side of starting a podcast could be done without spending any money (though she did end up purchasing a microphone).

She began to hone her skills using the production software Audacity. She learned how to record an interview using Zoom. She researched free host platforms, as well as how to get her podcast approved by podcast distributors such as Apple and Spotify. And to promote it, she started an Instagram account for the show.

As Wong’s comfort level talking in front of a microphone began to grow, so too did her desire to learn more about the ins and outs of broadcasting. She reached out to Jen Mueller, Seattle Seahawks sideline reporter and on-air talent with ROOT Sports, with a direct message on Instagram.

Mueller enjoys giving advice to young aspiring professionals in many fields, but particularly her own. And she was struck by Wong’s ability to follow up with her, and be top-of-mind.

“That’s what this industry is,” Mueller said. “… you have to be a self starter, and you have to be able to enterprise your own ideas and your own stories. And she’s got a leg up on everybody else, because she started it and she stuck with it.”

Mueller’s tips to Wong on how to build helpful skills were twofold: one, gain experience talking into a microphone and, two, interview athletes.

That’s when Wong decided to turn her podcast into a show focusing on diving deeper with high school athletes from dancers and lacrosse players to more traditional high school sports like track and football.

Recent guests have included Woodinville sophomore girls basketball player Valerie Cobb, who talked about how playing for an all-boys team growing up — and figure skating — shaped her development as a player; Snohomish grad Ellie Grant, who is a jumper on University of Idaho’s track and field team and spoke of the challenges of overcome scoliosis; as well as Faaiu — a high-level recruit whose name has graced national publications like Sports Illustrated and The Athletic.

“I get a lot of people who don’t message me back or say no, but I’ve learned to try. You’ll get a ‘yes’ somewhere in there,” Wong said.