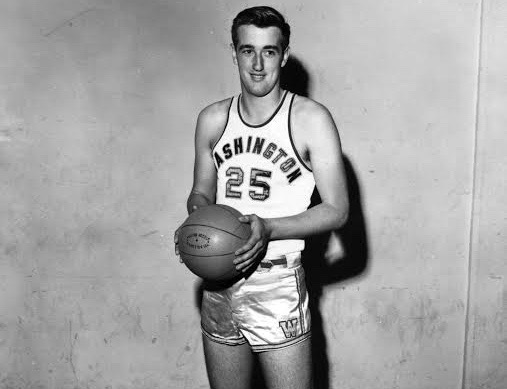 The 2020-21 college basketball season is reaching a midway point, and it is a good time to start asking a pertinent question about Division I college programs in Washington.

Who are the top five players in each program’s history with ties to Washington high schools?

We started with a look at Gonzaga’s Top 5 in-state players, and now we turn our attention to the Washington Huskies.

2. Half the player’s rating comes from what he accomplished at UW, while the rest of it is split between what he did in high school, and what he did or has been doing as a professional.

Signature statistic or honor: In leading the Huskies to their only Final Four appearance of an NCAA Tournament in 1953, Houbregs set the tournament’s single-game scoring mark with 45 points against Seattle University.

Skinny: Much of his recognition as the greatest UW player ever had to do with his accolades – only two-time All-American selection (1952, 1953) and NCAA player of the year (1953) in program history, and his 1,774 career points ranked No. 1 for more than three decades (ranks No. 6 currently). The other part of it was the way he elevated the Huskies into national prominence for the first time during that 1952-53 season. He averaged 25.6 points per game as a senior as a dominant interior player (his nickname was “Hooks” for his unstoppable hook shot). The Canadian native was drafted No. 2 overall in the 1953 NBA Draft by Milwaukee, and has since been inducted into the Naismith Basketball Hall of Fame.

Signature statistic or honor: Along with the man above him on this list (and the final guy at the end of it), Roy has his UW jersey number (No. 3) retired.

Skinny: If the frontcourt-terror Houbregs put the Huskies on the map nationally in the 1950s, the backcourt-wizard Roy kept them there in the 2000s. A top-50 recruit as a senior at Garfield in 2002 (22.3 ppg, 10.4 rpg), he not only became one of the Huskies’ greatest versatile playmakers ever, he was the poster boy for staying all four years before jumping to the NBA. The investment paid off – Roy had a monster senior season as the Pacific-10 Conference player of the year (20.2 ppg), and was a consensus All-American. And he was an immediate hit as a first-round NBA pick by Portland, being selected as the league’s rookie of the year (2007) and three All-Star teams before retiring early because of a degenerative knee issue.

Signature statistic or honor: Not known as a prolific scorer, his 14,862 career points in the NBA rank 143rd all-time – more of a testament to his durability and longevity.

Skinny: While others at the UW made bigger-name splashes for themselves, no UW player checked more boxes than “Buddha.” He helped lead Roosevelt to a state title as a senior. He was a four-year letterman who not only secured all-Pac-8 first-team honors at center, he was named an All-American after leading the Huskies to their first NCAA tournament berth (1976) in more than two decades. And after being selected as an alternate for the 1976 U.S. Olympic men’s basketball squad, he enjoyed a 19-year NBA career, winning two world championships with Detroit (1989, 1989) and a third one with Chicago (1996).

Signature statistic or honor: The Huskies have had a lot of dynamite scorers. None averaged 20-or-more-points in a single season more than twice – except Hawes, who did it in all three seasons he played.

Skinny: It was as if Hawes passed the baton of greatness, leaving a storied career at Mercer Island right when all-time coaching wins leader Ed Pepple arrived. In fact, he averaged nearly 28.0 ppg and 20.0 rpg as a senior in Pepple’s debut campaign. And he took that lethal scoring-rebounding prowess with him to the UW (after turning down Duke and USC). Hawes might have flown under the radar nationally because he played during the heyday UCLA era, but he graduated as the program’s all-time greatest per-game scorer (20.8), and No. 2 rebounder (13.2 behind Doug Smart’s 13.5). Hawes was a 12-year pro – with 10 seasons in the NBA.

Signature statistic or honor: Of all Thomas’ great high-scoring moments, none shine brighter than his 4A state tournament record 51-point game in a loss against Franklin in 2006.

Skinny: So many names could round out the list – all-time UW scoring king Christian Welp, longtime NBA standout Detlef Schrempf, NBA dunk champion Nate Robinson, and even Smart. The nod goes to arguably the UW’s top pound-for-pound performer in Thomas, whose mighty-mouse contributions (1,721 points in three seasons, ranking No. 7 all-time) made the Huskies roar. Despite being 5-foot-9, Thomas showed he could score in a variety of ways – against anybody in high school (averaged 31.2 ppg in final year at Curtis), in college (16.4 ppg) and in the NBA (18.1 ppg). He was a two-time NBA All-Star point guard with Boston, and is still one of the most popular personalties to come out of the state.