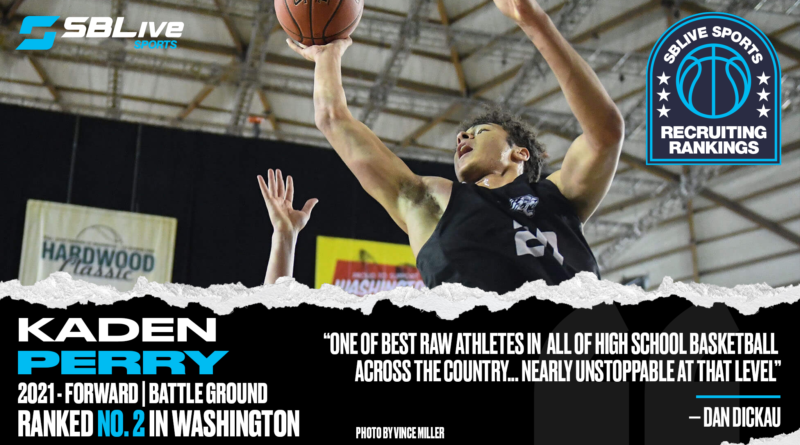 Over the next few days we will continue to roll out our Top 25 players in Washington. You can find the full rankings at the bottom of the post.

Here’s a closer look at No. 2 on the list, Battle Ground senior Kaden Perry.

ATHLETICISM: Perry is one of the best raw athletes in all of high school basketball — across the country. That ability will allow him to transition to the college game at Gonzaga. His athleticism will remind a lot of people of former Zag and current Memphis Grizzlies forward Brandon Clarke. He has tremendous jumping ability — showcased in rim-rattling dunks, blocked shots and big rebounds — but he is also outstanding running the floor in transition.

BALL SKILLS: Perry has really grown his skill-set over the last two years. Give his high school coach Manny Melo a lot of credit for not relegating him to being a back-to-the-basket big. He has the mechanics at 15-feet that show with more reps and continued attention to footwork he will be a good pick-and-pop option. But it is his ability to catch and finish in traffic in pick-and-roll situations and step off the block post-ups which make him nearly unstoppable at the high school level.

BASKETBALL IQ: Many young athletic bigs get bored with the basics of game plans and strategy such as pick-and-roll coverages or reading a double-team coming their way on the block. Perry has improved tremendously in these areas. This is a must playing in Gonzaga’s system and his coachability will allow him to showcase his athleticism even more.

UPSIDE: Perry has already signed with Gonzaga and has a chance to have a very nice college career. He will become a fan favorite in a hurry because of his shot-blocking ability and rim-rattling dunks.