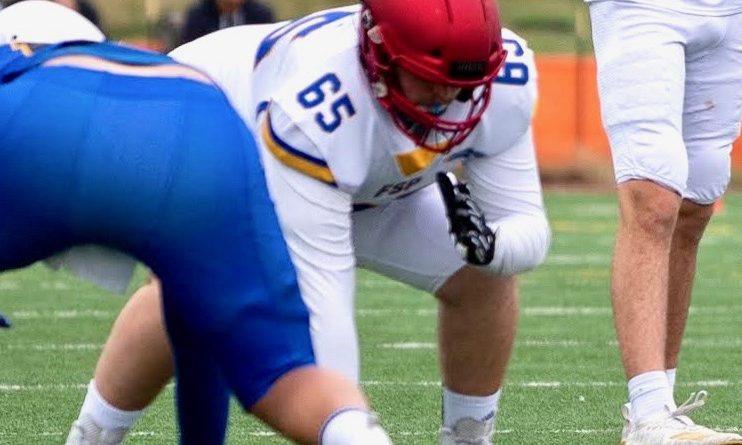 And the NCAA Division III schools have been all over him, targeting him as either an offensive tackle or guard. And he has spoken to all of the in-state NCAA Division I programs about a preferred walk-on spot.

“There is a prototype he fits – size-wise,” longtime Bears coach Tony Davis said. “More importantly, he is an outstanding student, and that has created a ton of options for him.”

There was a time 18 months ago when his weight kept dropping like a runaway descending elevator.

It was the spring of 2019, and Furness was coming off a sophomore season in which he was a two-way starter in football, and a key rotational player in basketball.

His playing weight was 215. But heading into summer activities, it had sunk to 180.

Still, the reasons for it could be explained: The teenager was always on the go between the two sports. And he had a couple of medical procedures, too, that could have been attributed to the dramatic weight loss.

But it became an alarming issue later that summer when Davis saw Furness after he had been on a two-week vacation.

“It was pretty striking,” Davis said.

“He is a pretty good athlete, but he was laboring through conditioning and weight room work in a way I had not seen before,” Davis said. “And there was a day that sticks with me: I could see it was frustrating him. It was clear he was telling his body to work harder, but it wasn’t happening.”

Finally, after being sidelined after gum surgery for the first two games, Furness had another blood test taken that discovered the problem – one so serious that he had to go to Seattle Children’s Hospital immediately.

“My mom woke me up at 2:30 in the morning and told me to get dressed to go to the hospital,” Furness said. “I was freaked out.”

When Furness first checked in, nurses put him on the scale: It read 160.

“They put me down in bed and were moving fast,” Furness said. “They put the IV in me and fed me insulin.”

That is the first time he heard what the diagnosis was: Type 1 diabetes.

“Immediately I felt better after they gave me insulin,” Furness said. “I had not been hungry for seven months. Once I got insulin, I ate two sandwiches and felt great.”

What is diabetes? The short-answer explanation is it is an ailment that occurs when the body doesn’t produce enough insulin to help turn blood sugar into energy.

Chronic Type 1 diabetes, which only occurs in approximately 10 percent of diabetes patients, is found more commonly in children (hence why it has been referred to as “juvenile diabetes”). If untreated, it often becomes life threatening.

“I don’t show a lot of emotion typically, but I felt the tears coming,” Furness said. “But in a second, I took a deep breath because my mom was pretty shook up, and I wanted to be strong for her.”

Furness spent two days in the hospital, and immediately regained eight pounds. When he returned to practice the following week, teammates and coaches told him they noticed an immediate improvement in his appearance.

“People said they could see it in my legs,” Furness said.

At home, Furness had to adapt to a new routine.

“There was a ton of nights when I would wake up and go, ‘This sucks, what am I doing?'” Furness said. “I’d have low blood sugar, and I’d have to down a whole lot of food.

“I just knew I had to push through. That is what people with Type 1 diabetes do. It has helped me grow as a person.”

He played in two junior-varsity games before cracking the varsity lineup in a mid-October game against Auburn Mountainview.

A week later, Furness reclaimed a starting spot at left tackle against Kentwood, and that is where he finished out the season.

Over the final six weeks, Furness packed on 60 pounds – returning close to what his sophomore-year weight was.

“Every time I wake up, I look at it first thing,” Furness said. “And if it goes off while I am sleeping, I have a refrigerator in my room now.”

Filled out, Furness is now that sturdy teenager that nobody bats an eye at. He is back at full strength, working out full-time at Covington-based Legerity Sports Performance with trainer James Laurence.

And he is now sorting through all of his college choices.

“It is nice getting the attention I always dreamed about talking to schools,” Furness said. “It used to be slow, but once I got my first (offer), it has opened up.”