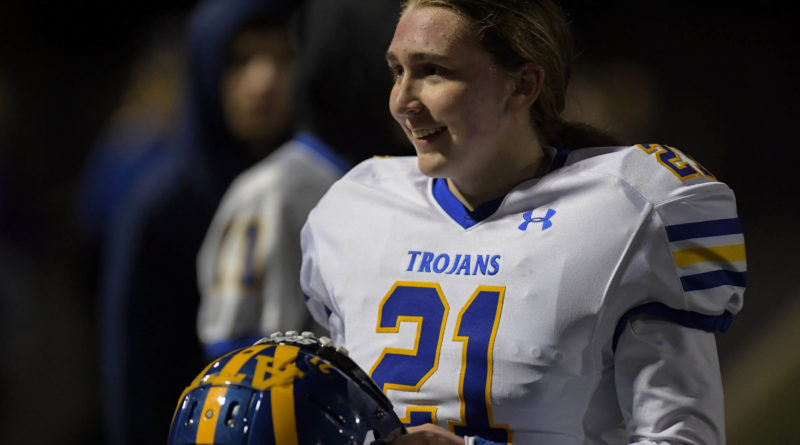 Brynna Nixon isn’t one to sit around. These days, the teenager’s schedule consists of online school, practice in two different sports four days a week and a part-time job.

But more than 10 months into a pandemic that has shut down high school sports in Washington, as well as much of life as we knew it, the Fife senior’s drive to compete has turned to restlessness. Like many high school athletes her age, she’s hopeful she’ll be able to play her last high school sports seasons in 2021, even if abbreviated, before she heads to the midwest to play lacrosse for Marquette, where she committed in October.

“It was nice to be able to take a break for the first week,” Nixon said, “after that it was like, ‘when can I start playing sports again?”

Nixon is a three-sport high school standout at Fife. She’s an all-league honorable mention forward on the school’s girls basketball team, a standout lacrosse goalie, and a quarterback on the school’s football team. She’s now more than a year removed from throwing the first touchdown pass by a female in school history, which she did in a postseason win over Clover Park.

All of that feels like a whirlwind to Brynna. Sometimes she can’t believe it all even happened.

On one hand, her own merits produced memories she’ll look back on with amazement. She attended a Seahawks practice and talked with quarterback Russell Wilson (her idol), she received a shoutout in Gov. Jay Inslee’s State of the State address last January (with a photo to prove it) and saw her name appear in a constant stream of headlines in media outlets across the state lauding not just her pass, but the significance behind it.

The cyclone of attention also seemed outsized to Nixon at times.

Shelli Nixon, Brynna’s mom, remembers Brynna asking why a big deal was being made about her performing what would otherwise be a routine part of her job as a quarterback. After all, she’d thrown a pass. She’s thrown plenty of passes. Last year’s starter, Gabe Duenas, throws passes all the time (even in Fife’s run-heavy Wing-T offense), she’d say.

“I’ve been doing that for so long that it feels like second nature,” Brynna said. “And everyone’s hyping it up to be this big thing. It’s an amazing thing, but to me, it’s another pass I made.”

Shelli underscored the historical significance to Brynna, as well as the importance of representation. How would seeing a girl succeed at quarterback have impacted you when you were younger?

Though there is nothing new about girls playing football, Brynna saw the importance of being a “first-ever” on display watching Vanderbilt kicker Sarah Fuller become the first woman to score a point in a Power Five conference college football game when she kicked a PAT against Tennessee on Dec. 13.

Nixon first read about Fuller after she made her debut with the opening kickoff of the second half of a Nov. 28 game against Missouri.

The extent of Brynna’s college football digest typically doesn’t stretch beyond watching University of Washington and big bowl games, but once she learned about Fuller’s story, she made her games appointment viewing. Though they play different positions, Brynna felt like she understood Fuller’s experience making a name for herself in a male-dominated sport, especially since football isn’t her main sport. Like Brynna’s prowess as a lacrosse goalie, Fuller was also a goalie on the women’s soccer team at Vanderbilt.

When Fuller kicked her first extra point, Brynna felt the drive to return to the football field even more.

“I was on my feet,” Brynna said. “My whole family was watching that game.”

Nixon’s varsity opportunity came at the tail end of the 2019 season after the starting QB left the game with an injury. She took a couple of snaps in Fife’s 2A regional loss to North Kitsap the following week.

Now with last season’s starter graduated, she returns with the institutional knowledge and experience to put her in a good spot to win the starting job competing against a pair of underclassmen.

She doesn’t exactly see it that way.

“No matter what with a starting position, you can’t just walk into it like you’re going to get it; you’re not going to get it that way,” she said. “But I control me, and I know that I know my stuff, I know everything that’s supposed to be happening on offense, my reads and everything, so I feel like I’m in a good place to start, but if I don’t it’s because I’m not on the level my team needs me at, so I’ll need to work that much harder and be there for my teammates.”

And she’s hoping for a chance to show for the work she’s put in to be the school’s starting quarterback. That’s if the season starts on time. The WIAA has postponed the start date for the football season until March.

Still, Nixon has followed a message coaches have preached to her from a young age: worry only about what you can control.

“When the season comes around I will be pumped for it to start,” she said.