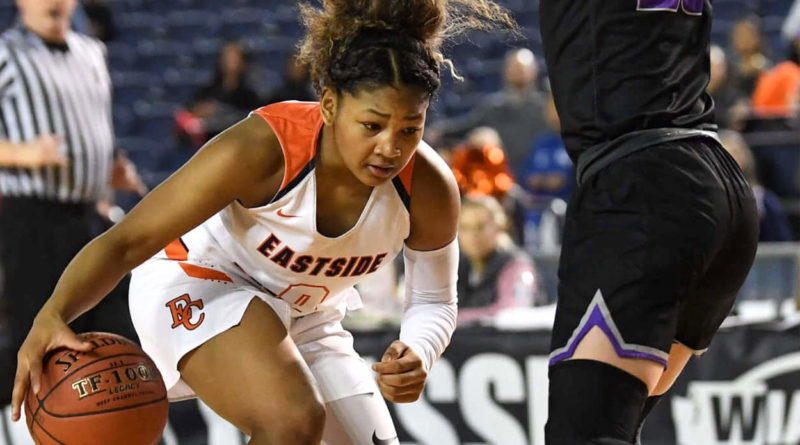 SBLive Washington is previewing the best teams and players in the state ahead of the 2020-2021 high school girls basketball season.

Here’s a closer look at all 15 returning all-state girls basketball players, across all classifications, with updates on what they’ve been working on in the offseason.

UPDATE: The high-motor Hughes is always on the go. But Woodinville girls coach Scott Bullock said these past months have been a good time for the Montana State signee to take a step back. “Sometimes the best thing for her is to rest,” Bullock said. Projected to play more of a wing in college, the continued step in Hughes’ development is improving her perimeter game. Bullock has seen gains in that area, especially in her mid-range shooting (and also her free-throw shooting). She participated with The Way to Win Gold team this summer, but did not play as much as current Woodinville teammates Veronica Sheffey and Tatum Thompson.

UPDATE: Oh, those fast hands can defend. That is why Glacier Peak’s leader is considered one of the top on-ball agitators in the state. But Grizzlies coach Brian Hill said one of his point guard’s offseason goals was to quicken those hands on the offensive side – specifically in her pull-up shot release. “She needs to bring the ball up quicker (on the release),” Hill said. “She starts it too low.” Fortunately, Collins has always been an astute self-evaluator of her game – and a diligent worker. And she has steadily improved on one of her perceived weaknesses – perimeter shooting – topping out at 30 percent on 3-point shooting as a junior. She recently gave D1 Chicago State a verbal commitment and will sign in late winter.

UPDATE: What would you expect this top-10 recruit nationally and best all-around scorer this state has seen in a while to be doing the past few months? She’s been lighting up the Under Armour circuit (after ripping up the Adidas Gauntlet circuit in past years). Not surprisingly, after the five big national events the top Northwest Blazers Orange team have entered, Von Oelhoffen has been a top scorer, rebounder and assists performer. Also, she captured the one-on-one title at the nationally-acclaimed Wootten Top 150 Basketball Camp. The three-time All-American sits at 2,392 career points entering her senior year.

UPDATE: Now that Tiarra Brown is off to Grand Canyon University in Arizona to join her sister on the women’s basketball team, this is now Morales’ show (moving up to the 4A ranks) as a senior point guard at Bethel. Because coach Tim Brown wants his standout to play a little more off the ball, he asked her to “add to her strength and speed” during the down time. “We will feature a bunch of stagger screens in our offense, and I want her to be able to get rid of the defender,” the Braves coach said. The Portland State signee opted out of much of the AAU season – she played in early tournaments with Tree of Hope – to lift weights, do a lot of jump-roping and work on individual skill-refining.

UPDATE: That teenager putting up 500 shots on an outdoor court in the rain? Yeah, that is the reigning Metro League player of the year, who continues to put in long hours to work on her game. “That girl is in the gym seven days a week, up at 5 or 6 a.m.,” Eastside Catholic girls coach Katie Farr said. An area that Samuels is always trying to improve is her off-dribble attacks. Heading into 2020-21, Farr wants Samuels to take a bigger step as a vocal leader. “She commands the floor, but she has not mastered it verbally,” Farr said. Samuels got in a full slate of summer and fall tournaments playing with the U-17 Northwest Greyhounds team, playing alongside Syracuse signee Julianna Walker.

UPDATE: Well before COVID-19 hit, Wallace had set a big offseason goal – get stronger. When the pandemic began swallowing up businesses, including gyms, the teenager asked her father to set up home workout stations in the garage. “I started looking, and found good used equipment,” Rory Wallace said. So, the two sisters – Ashlynn and Kendall, an incoming ninth grader – have been going hard with free weights, on the dip and pull-up bars, with resistance bands and on the cardio bikes all summer and fall. They’ve also worked out together with ball-handling and shooting drills. The Idaho signee has also played with the Northwest Blazers’ Orange team alongside Chiawana standout Talia Von Oelhoffen.

UPDATE: Arguably the state’s top 2022 recruit decided to switch to Tree of Hope 17U to showcase her skills – and had a banner summer playing all over the country. Her playmaking role as a junior at W.F. West will expand, coach Kyle Karnofski said. “She’s got to score a little more because we lost three seniors who combined for 1,500 points,” Karnofski said.

UPDATE: Her perimeter shot is already college-ready – and the Bulldogs’ junior has been showing that off during the summer and fall with the Northwest Blazers’ Sun team. But Ellensburg girls coach Jeff Whitney wants Philip to attack the basket more. “When they take away that shot – what do you do next?” Whitney said. “You’ve got to get to the rim.”

UPDATE: In some key developmental areas – notably ball-handling and 3-point shooting – Sylve is still playing catch-up after missing more than a year (including her sophomore season) with a serious knee injury. “She missed out on a full year of reading the floor, knowing when to go – and the sets we run,” East Valley coach Robi Raab said. Sylve has been busy this fall with Sagebrush Hoops.

UPDATE: At Boise State, Hull will likely be a trailing post player expected to knock down big perimeter shots. And her offseason work has reflected that. “Consistency in her (shooting) range has been a big emphasis,” La Salle girls coach Alyssa Goins said. “She has a really nice 3-(point) shot. It is limitless.” Hull missed much of Northwest Blazers’ Orange action with an early-summer knee injury.

UPDATE: It has been a busy summer for Mellema, a popular 1A breakout pick, playing for the top two Northwest Blazers’ teams, and tournaments with her high school team. Lynden Christian girls coach Brady Bomber said a big summer focus for the Wyoming signee has been finishing shots around the rim – from all angles. “We want the ball in her hands more, especially with Riley (Dykstra) gone,” Bomber said.

UPDATE: Gators coach Chris Spivey chuckles when the subject of Walker’s offseason work comes up. “With her, she is such a gym rat – you don’t have to tell her anything,” Spivey said. So, the Syracuse signee’s basketball activity has been simple: She plays with the top Northwest Greyhounds squads, and gets in individual work with her father, Lonnie. She enters her senior year with 2,491 career points.

UPDATE: Uh-oh – this extraordinary athlete is now touching the rim as a junior, and has had some big games playing for Olympia-based Hoopstars Family. The plan in 2020-21 is for Gardner to play more at her natural position – off guard. One of the things Ilwaco coach Jason Koski asked her to work on was her pull-up 3-point shooting. “We need her to knock that down consistently,” Koski said. “She likes to be challenged.”

UPDATE: At one point, Glenn had to make an important decision – basketball or junior rodeo. Once she picked the hardwood, she made a year-round commitment – and has been a stalwart with the Hoopstars Family. “Her mid-range game has improved, “Ilwaco girls coach Ned Bittner said. “Early on, she would just shoot the 3 or get to the hoop. Not now.”

UPDATE: This returner does little to no basketball in the offseason. That is because Martinez is an NCAA Division I soccer signee with Oregon State, and plays club year-round. And that footwork certainly shows up in basketball. “She will pull moves out – off-foot shooting on layups – I know come from using both legs to kick a soccer ball,” Tri-Cities Prep girls coach Joe Mackay said.