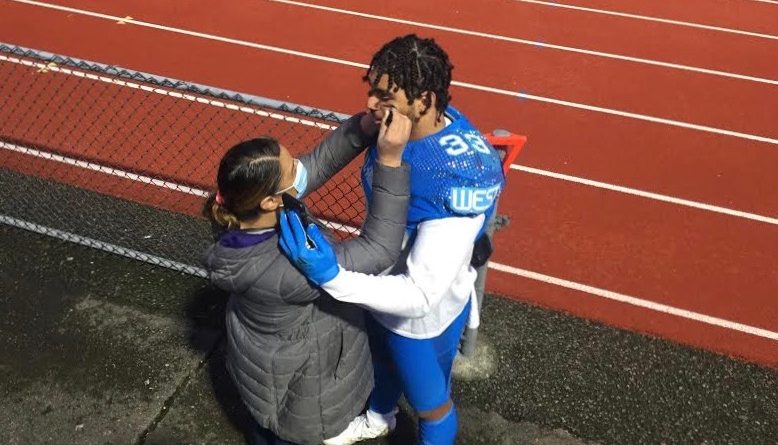 Confusion reigned as a giant cardboard monolith stood on the front porch of the Tuimoloau house in Edgewood.

It was a couple days before Christmas, so one of Eastside Catholic football star J.T. Tuimoloau’s sisters thought it could be a doll house – that is, until she read the name on the side of the tall package.

It was Tuimoloau’s locker for the 2021 All-American Bowl, which was canceled in October because of COVID-19 pandemic concerns.

That didn’t stop the big man from ripping open the box to see the equipment, including his jersey and helmet.

“I went and got shoulder pads in the garage, and put it all on and tried it all out,” Tuimoloau said. “I had it on for 10 or 15 minutes.”

On Monday, the four West squad members decided to bring a little bit of that would-be-happening-that-week-in-San-Antonio flavor to Seattle, participating in an impromptu photo and video shoot at Sammamish High School.

“We all wanted to do something special … so we decided, ‘Let’s all put on the jerseys, meet up take some photos and do something cool,'” Huard said. “We deserve it. We deserved to go play in that game.”

Simon, who is graduating from Lincoln early and enrolling at USC on Jan. 11, said he received the same massive package on his front porch last week.

“It was like an early Christmas, I was so happy,” Simon said. “But as I started opening it to see the gear, man I thought just to actually play in this gear would have been 10 times better.”

The locker included the sky blue-colored jersey and helmet; four pairs of Adidas shoes; a pair of Adidas cleats; a warm-up suit; a camouflage pullover – and even an All-American Bowl chair to sit on.

“I miss getting ready for games – putting on socks, putting on the headphones to get into the zone. And eye black is my biggest thing,” Tuimoloau said.

“I really wanted to experience all the stuff (at the All-American Bowl) that I got to see before that – all that free time with the other recruits there, and playing in front of my family.”

Egbuka also confirmed to SBLive Washington on Monday that he was enrolling early at Ohio State. He will start taking college classes online Jan. 11 before leaving for Columbus nine days later to start an extended quarantine.

He is planning on participating in Buckeyes’ winter workouts starting Feb. 1.

“I had a talk with my head coach (Colby Davies) and weighed all the options.” Egbuka said. “There was no guarantee there would be a season – or it would just five or six games. Basically at the end of the talk, he said, ‘We both know what the right choice is.’

“It’s difficult to move on.”