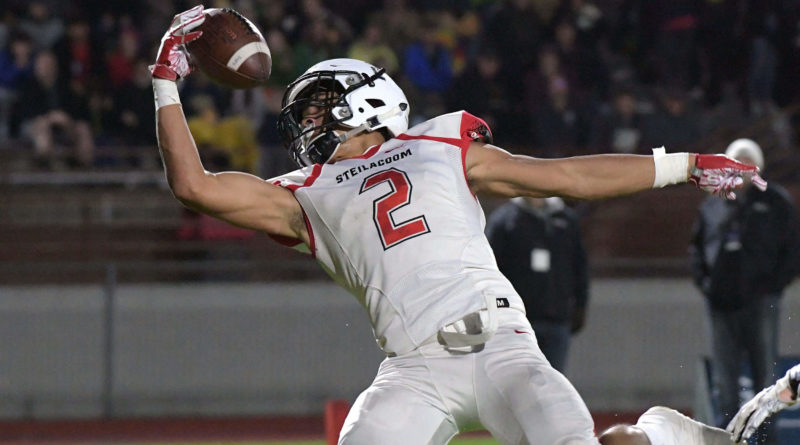 Five-star Steilacoom High School wide receiver Emeka Egbuka isn’t just the top high school recruit at his position in the class of 2021, he is a pass-catching cheat code – witnessed personally and seen virally.

And there have been waiting hands all over the country for his blue-chip services.

Egbuka announced on social media he will be signing with Big Ten powerhouse Ohio State University and coach Ryan Day over hard-charging Oklahoma and hometown Washington.

“I always knew that I liked it the first time I went down there,” Egbuka said.

All three finalists threw dynamic recruiting personalities at Egbuka over the past year. They were all receivers coaches, too, in Ohio State’s Brian Hartline, Oklahoma’s Dennis Simmons and UW’s Junior Adams.

Ohio State has long been the favorite, especially with its rich history of putting wide receivers in the NFL. Nine Buckeyes have been drafted since 2015, including Michael Thomas (2016), Curtis Samuel (2017) and Terry McLaurin (2019).

The Buckeyes offered Egbuka right after his sophomore season – in January of 2019. A couple months later, he flew out to Columbus for an unofficial visit with his parents.

Hartline seemingly struck the right chord in every way recruiting the All-American pass catcher. But in recent months, it was thought that the Sooners had closed the gap. In fact, Egbuka made a trip to Norman, Oklahoma last weekend.

As soon as Egbuka returned to Washington, he announced on Twitter that he was making a decision – on the date of his grandparents’ 50th wedding anniversary (Dec. 11).

“When I got back, I sat down with my parents, crunched the numbers and saw what was best for me,” Egbuka said.

Last season, Egbuka caught 83 passes for 1,607 yards and 25 touchdowns. He added eight interceptions at defensive back, and tallied 35 touchdowns overall (scoring in all three phases), and was named the Gatorade state player of the year.

The All-American wide receiver was also No. 4 in SBLive WA’s end-of-season football rankings.

“He has impacted the program in so many different ways,” Steilacoom football coach Colby Davies said. “He is going on to do all of his great stuff. We will miss him.”