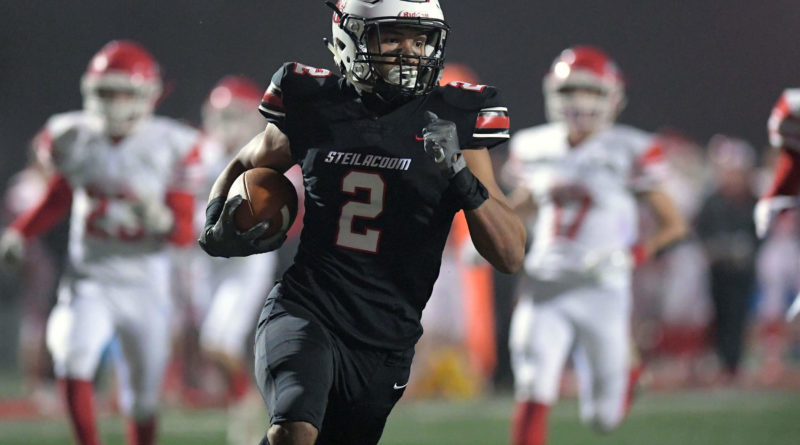 Yeah, there were times Steilacoom High School’s Emeka Egbuka felt the stress of being the top-ranked wide receiver prospect in the nation.

Coaches contacted him endlessly. Fans of schools reached out to him religiously. Recruiting analysts wanted the scoop.

On Friday, Egbuka made his decision public – he was going to go play football for the Ohio State University Buckeyes.

“It was stressful, like everyone says,” said Egbuka, who was at a late-afternoon team workout at school a half-hour after his announcement. “But it went really smoothly.”

It went smoothly because Egbuka developed a comprehensive, numbers-crunching system that aided him choosing the Buckeyes over Oklahoma and Washington.

“(My dad) did not want me to make an emotional decision,” Egbuka said. “So I made chart with each school in it, did a points system for who was best in (each) category … and I averaged it out in the end.”

“It was close,” Egbuka said. “All three of them were pretty close.”

So, on Tuesday, Egbuka traded in the calculator for the camera, bringing in teammates to help him make a two-minute announcement video that he unveiled Friday to the public on Twitter.

“They’ve helped me get here so much more than they know,” Egbuka said. “They are my best friends.”

It was that same day when Egbuka got Ohio State coach Ryan Day and Buckeyes wide receivers coach Brian Hartline on FaceTime to reveal his college choice.

And he decided to play a prank – at their expense.

At first, Egbuka began talking about the process. After a couple of minutes, he panned the camera back so the two coaches could see him wearing a sweatshirt of another unnamed university.

“They got expression-less, like their hearts dropped,” Egbuka said.

The Sentinels’ standout did not let the prank go too far. Seconds later, he peeled off that sweatshirt to reveal he was going to be a Buckeye.

“I did it to my parents, my friends and my girlfriend as well,” Egbuka said. “I liked to have fun with it.”

Maybe the most remarkable thing about this week was that word of Egbuka’s decision did not get out to anybody – not even from his 10 teammates who starred at the end of the video.

“That is part of my personalty – I don’t like when things are spoiled,” Egbuka said. “I hate when movies are spoiled for me, TV shows or anything like that. I didn’t want anybody to know where I was going.”