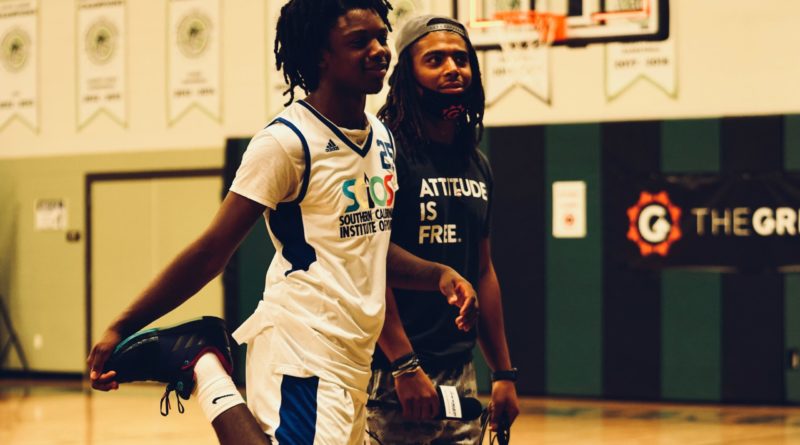 Kahlil Singleton faced an uncertain road ahead. After playing with a new Oregon-based AAU team in a summer when tournaments, travel and opportunities were stunted by the coronavirus, the Fort Vancouver basketball standout calculated his options.

He could stay in the Vancouver/Portland area, train locally and hope for a high school basketball season after Christmas. Or he could hit the road, find a team — or rather, teams — and seek opportunities to play in states with more loosened restrictions.

With COVID-19 cases projecting to surge around the holidays, Singleton chose the latter, a move that resulted in a fall spent crashing in hotels or with family in Arizona, California and now, Minnesota.

“I don’t want to be a downer or nothing, but me personally, I didn’t feel like a (high school) season was going to happen” on time, Singleton said. “I just went into scramble mode, talking to schools left and right, really just getting into contact with as many as I can.”

Nothing has been scripted for Singleton, who was a 3A Greater St. Helens League first team selection as a sophomore and a preseason 2A state player of the year candidate in Washington if there is a 2021 season.

For the past month, Singleton has shopped himself around to teams playing in high-level grassroots basketball circuits, packed up his laptop for remote learning and hopped from one elite prep team to another – all while remaining enrolled at Fort Vancouver. Now, that team is Minnesota Prep Academy, a program he’s recently joined.

“We figured it was the best situation that wouldn’t affect any bit of eligibility or anything he still wants to do in his future.”

And he’s not alone. Singleton is one of many high school basketball players caught in the crosshairs of Washington state’s response to the pandemic. As a result, several higher-profile athletes have left the state in hopes of boosting college recruitment, while others are simply looking for opportunities to play while high school sports have remained sidelined in Washington for nine months.

But Singleton hasn’t been playing with a local AAU team. He also hasn’t been playing in unofficial tournaments out of state with his high school team, like some programs have been quietly doing. Nor has he officially moved to another state in hopes to enroll at a school in one of the more than 30 states where high school sports are being played, either.

Two days before the first day of the Grind Session Bubble, a grassroots tournament featuring AAU and prep teams from around the country that started in Phoenix, Singleton got in touch with a coach of the AAU team SoCal Institute of Sport.

The competition, Singleton said, was better than he was used to — a style he compared to the talent of AAU with the pace of the high school game. Several Seattle-area prospects have competed in the Grind Session with BFL Prep, a Seattle-based team run by Barry Jones, a Cleveland grad who has NBA coaching experience.

He posted a few standout performances with SoCal Institute of Sport, including a 22-point, four rebound game, a 15-point, three rebound outing and a game with 23 points and five boards — all against teams with Division I talent. One game, he went 7 of 7 from 3-point range (Ensley and his young children were cheering him on watching from a live stream back in Vancouver).

When he left that team for Minnesota Prep Academy, a school also competing in the Grind Session Bubble, it was on a recommendation from a tournament employee.

With the potential of college coaches watching, he couldn’t waste his opportunity. Looking around, he saw players at the Grind Session getting offers. Though NCAA coaches are still under an in-person recruiting dead period, coaches are able to watch live streams and film.

“I really never know who’s watching,” Singleton said. “I don’t really feel like it makes a difference. I’m just trying o stay focused on the court, whether there’s college coaches or not.”

That focus extends to the classroom, too, where Singleton is one of Ensley’s model students. Before he left, Singleton, who is taking fall classes at Fort Vancouver all online, updated his teacher on his unorthodox decision.

He holds an early offer from Eastern Washington, which he believes still stands even though he’s reclassified from the class of 2022 to 2023 — a decision he made to soften the scholarship logjam many schools are facing since the NCAA has allowed seniors another year of eligibility. Reclassifying opens up the possibility of playing at a prep school after his high school eligibility is exhausted.

When will Singleton return home to Vancouver? He’s not sure. Singleton is in St. Paul, Minn. at Minnesota Prep Academy, living with teammates at house owned by the academy. He’s not enrolled in the school, instead paying a flat fee that covers housing and travel. But he’s moved many of his belongings out to Minnesota with him.

On Friday, Minnesota Prep Academy plays prep school La Lumiere on the road in Indiana before going to a Grind Session Bubble in Kentucky for nearly two weeks. Singleton will be home in Vancouver for Christmas, but heads back to Arizona early in the new year for another tournament. Such is life on the road.

“It’s a quick turnaround,” he said.

He plans to finish out the semester online at Fort Vancouver, then reevaluate. Part of him is holding out hope he’ll be able to return for a season and don the Trappers red and white. But with COVID cases surging in Washington and nationwide, that much remains up in the air.

That’s where his near-daily contact with Ensley, with whom he has a tight-knit relationship, comes into play. A fierce defender of the high school athletic model and what it means to represent your home school, Ensley has had to come to terms with the fact that he can’t provide a lot of what his students need when in-person learning is shut down and he can’t let anyone into Fort’s gym.

And the coach isn’t fighting it. Instead, he’s lending a helping hand.

“If he wants his dreams to come true, being a Division I athlete,” Ensley said, “he has to find a way to be able to do that, and I support it. It’s a huge deal. And for him to even have the ability is awesome, and I can’t provide that.”