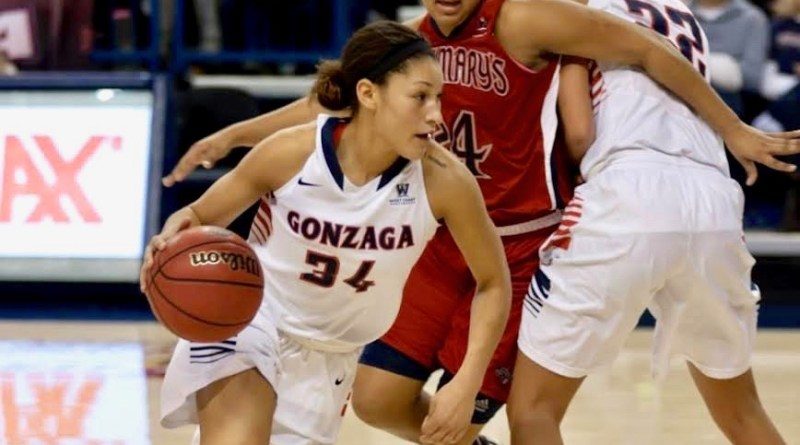 During those long travel days in Germany and Denmark, playing professional basketball all over Europe, former Mead High School and Gonzaga University standout Jazmine Redmon got to thinking about her future.

“All I did was play basketball, and it was really hard for me to get over that fact,” Redmon said. “I had to find something … where I could still love the game.”

She did just that.

After spending last season as a full-time volunteer assistant at her alma mater under coach Quantae Anderson, Redmon, 29, was hired in September to take over the girls program at University High School just down the road in Spokane.

“Over the summer, a family friend contacted me and said University needed a new head coach,” Redmon said. “I was like, ‘Oh, I did not think they would give me the job because I had no experience.’ But I got it. It’s been amazing. I am excited – and nervous.”

Redmon was known as a feisty, relentless point guard at Gonzaga, earning West Coast Conference defensive player of the year honors in 2013.

“I want my team to play a lot of hard-nosed defense, and get easy buckets in transition,” Redmon said.

On offense, Redmon said University will run a lot of stuff she learned from her days at Gonzaga.

“Lots of ball screens, high-low stuff – and whatever the defense gives us,” she said.

Redmon’s father, Fred, who was an assistant at Mead, will jump over and join her staff. And her younger sister, Jade, will also be on the bench.

Here are other offseason coaching-hire developments:

While injured playing at Warner Pacific, Segerman started volunteering for her former coach at Franklin Pierce – Chris Gibson – and his team at White River in the early 2000s. That started her path in coaching. She was a three-year assistant at Spanaway Lake before being hired as the Tyee girls coach in 2013 (where she largely coached by herself early on). Over the past two seasons, she served as a mentor to new Federal Way coach Chantel Dixon – and then replaced her at the helm in July.

The 2008 Vikings graduate, and member of boys coach Scott Campbell’s first team, returned to become a five-year assistant with the girls’ squad in 2014-15. Last season, Elliott left to take the Fife girls head job, leading the Trojans to a 21-5 mark, a berth to the 2A WCD title game (losing to Port Angeles) and securing a spot in the regional round. After Cherokee Ainslie stepped down at Puyallup, Elliott was hired as her replacement last May. He is also a mathematics teacher at the school.

A standout football player in Georgia, Johnson joined the US Army and coached girls basketball for the first time at age 19 – at Stuttgart High School in Germany. He returned to his home state and coached at various schools, but moved out to Washington in 2014. Not only has he supervised a lot of Northwest youth basketball, but he was the boys coach at Seattle Lutheran – and then oversaw both programs at Eastside Christian in Bellevue before being hired by the Wolverines.

Not many coaches get their first crack at a head job at age 60 (especially after retiring). But after being hired in September, Wilmoth will lead his “neighborhood” program after being a longtime Vancouver-area girls assistant at Mountain View (twice), Battle Ground and with the Plainsmen. A former football and baseball standout at Centennial (Ore.), Wilmoth has learned a lot about basketball watching videos – and ultimately through the experience of coaching his daughters in club and high school.

An AAU stalwart in Snohomish County, and a longtime NWAC assistant coach, the Lake Stevens resident takes over his first high school program. And McFerrin is inheriting a team (taking over from Brandon Newby after three seasons) that is only five years removed from winning a state championship (2015). The founder of Fusion Elite Basketball, McFerrin has spent the past eight seasons as a women’s assistant at Edmonds Community College and Bellevue College – and has been a head middle-school coach.

Who says you can’t go back to where it began? That is what Smith did when he was hired in August to replace 3A championship-winning coach Hala Corral with the Falcons. In fact, Smith faced a similar situation in 2012 when legendary Prairie coach Al Aldridge retired – and he came on board the season after, leading the Southwest Washington powerhouse to a 21-4 mark. But Smith decided to step down after one season to coach his fourth-grade daughter, Claire – who is now entering Prairie.

This former guard who was part of the late Phil Lumpkin’s 2007 state championship team at O’Dea is a first-time high school coach at 31. Not surprisingly, defense at Roosevelt will be the priority (and he has 6-foot-2 Katie Thiers back for one more season). After finishing up at the UW, Mulberg got into club coaching – first at defunct Edmonds Sports Academy, and currently as a co-director of the Ballard Select Program. He was hired in June to replace Jasen Thomas at Roosevelt.

Did we miss anyone? Please send us an email and let us know.