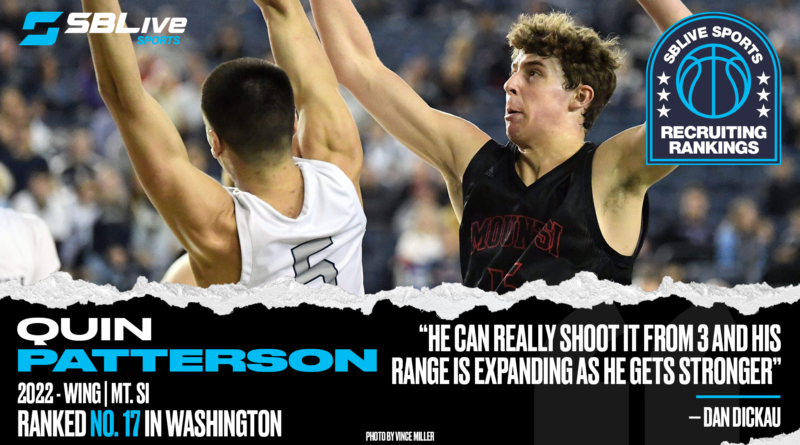 Over the next few weeks we will roll out our Top 25 players in Washington. Here’s a closer look at No. 17 on the list, Mount Si junior wing Quin Patterson:

ATHLETICISM: Patterson is a good-sized wing who has impressive length. He is athletic and does a nice job with his lateral quickness, keeping guys in front defensively.

BALL SKILLS: Patterson can really shoot it from 3 and his range is expanding as he gets stronger. He has good footwork, which allows him to speed up his shot and take advantage of his size at the high school level. He has been able to develop slowly because of all the weapons that Mount Si has had over the last few years. He has also shown the ability to put the ball on the deck occasionally.

BASKETBALL IQ: His older brother Tyler is a freshman at Montana State and his father is a former Division I assistant, so he has been around and knows the game. He will continue to be held to a high standard by his high school coach Jason Griffith as they compete for 4A state championships. I would expect his basketball IQ to continue to grow and help him be ready for the collegiate level.

UPSIDE: With Patterson’s size and ability to shoot it he is drawing plenty of interest at the Division I level. It’s hard to peg his level at this time — schools from the Ivy League to the Pac-12 have been in contact — but with his family’s experience at the Division I level he will make a choice based on the best opportunity both athletically and academically, as opposed to just taking the offer at the highest level which unfortunately too many players fall into.