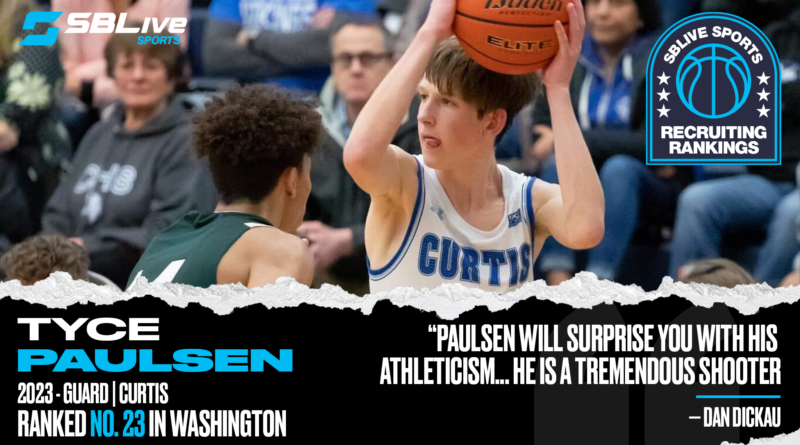 Over the next few weeks we will roll out our Top 25 players in Washington. Here’s a closer look at No. 23 on the list, Curtis sophomore Tyce Paulsen:

ATHLETICISM: Paulsen will surprise you with his athleticism. He continues to grow — he’s added at least an inch to his frame over the past year — leading me to believe he has a really bright future. His older brothers, Jase and Zack, have shown the size, strength and athleticism to play at the college level which leads me to think Tyce will do the same.

BALL SKILLS: He is a tremendous shooter — maybe the best shooter in the state outside of John Christofilis at O’Dea. His shooting touch was evident as a freshman at Curtis when he averaged 18 points per game and was named First Team All-South Puget Sound League. His handle is solid, but not overly creative at this time.

BASKETBALL IQ: Paulsen’s understanding of the game is really strong, and there are two primary reasons why: he has older brothers who are playing at the college level, and he has been exposed to tremendous coaching both at the high school and club levels. Because of his high basketball IQ — and his shooting ability — he is already impressing some Division I coaches.

UPSIDE: Paulsen already holds at least one Division I offer as he starts his sophomore season. Look for many more schools to show interest based on his shooting ability alone. That is such a valued skill at the college level.

How he fills out physically over the next two-plus years will largely determine the level he plays at in college.