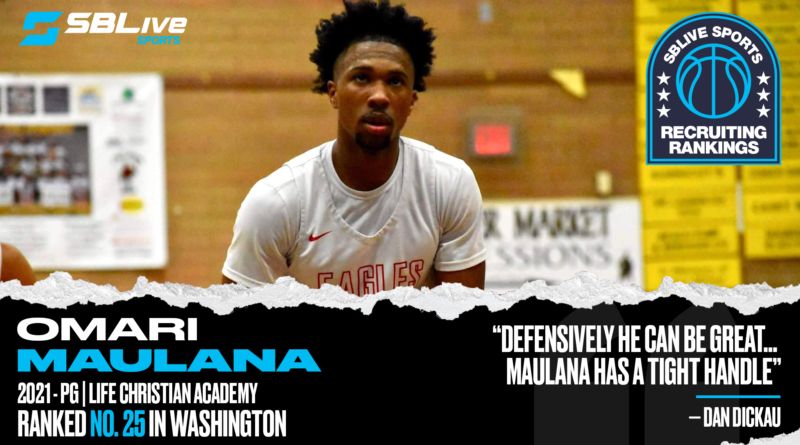 Over the next few weeks we will roll out our Top 25 players in Washington, starting with No. 25 Omari Maulana. Here’s a closer look at the Life Christian Academy point guard:

ATHLETICISM: Maulana has good size, length and athleticism for a point guard. This will help him translate well to the college level in addition to his strength which has allowed him to play bully ball at the point against many small school guards. Defensively he can be great because of this.

BALL SKILLS: Maulana has a tight handle that allows him to aggressively push the ball in transition. Where he needs to improve is not over-dribbling and getting himself stuck. He has shown himself to be a willing passer but at this point is more of a “setup” point guard than a “creating for others” point guard. His jump shot is solid but needs more consistency and reps which is often the case with athletic point guards at this stage.

BASKETBALL IQ: As with many young point guards, Maulana’s basketball IQ is a work in progress. There are days it clicks and others where it doesn’t. He has shown flashes of making the right reads. If he can consistently make the correct reads in pick and roll situations this will determine the level of college he can play at and the success he will have. As with point guards at most levels they must be an extension of the coach and his IQ will need to be brought out by the coach.

UPSIDE: Maulana is hard to peg because there is a ton of upside, but so much of it will come down to the little things. The footwork and consistency of his jumper as well as making the right reads in pick and roll and drive and kick situations will be paramount to his development and be something a college coach feels he can develop.

What will allow him time to make these improvements are his athleticism and aggressiveness. Those are two things that can’t be taught. If he puts it all together Maulana is a solid Division II prospect.