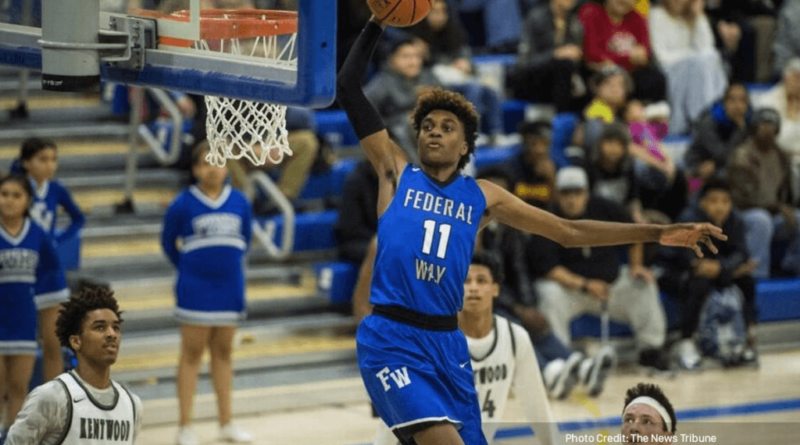 For years, Jaden McDaniels’ path from a Washington high school basketball star to the NBA was scripted.

Now, after one year playing for his hometown Washington Huskies, he’s projected as a late first round pick in the 2020 NBA Draft.

At Federal Way, McDaniels led the Eagles on deep state tournament runs, including a runner-up finish in 2018 and a third place finish in 2019.

He was a two-time all-state selection by The Associated Press, won 4A North Puget Sound League titles every year he was in high school and broke his school’s single-game scoring record when he put up 51 points on Todd Beamer. As a freshman, he was a part of Federal Way’s second consecutive state title. As a senior, he averaged 23.2 points, 10.3 rebounds, 3.2 assists and 2.1 steals per game.

Though a state title was elusive during his time as the Eagles’ centerpiece, McDaniels was a matchup nightmare, a highlight machine and, in the eyes of coaches who had to game-plan for him, a problem.

“We tried some things, but at the end of the day he’s going to get drafted for a reason,” Enumclaw coach Terry Johnson said.

How long did Gonzaga Prep have to prepare?

Less than 24 hours. Both games were at the state tournament.

In short: all eyes on McDaniels and if he made a move toward the basket, plug the lanes and due to the matchup nightmare he presented, hard-head ball screens and Do. Not. Switch.

“Whenever he would pass, we thought we were winning,” McIntyre said.

In the 2018 4A state championship game, Gonzaga Prep wanted to stick to its man-to-man defense. McIntyre stuck Anton Watson, his 6-foot-10 junior, on McDaniels and hoped they would cancel one another out. “That was a really good matchup for us,” McIntyre said. “Anton was physically strong. And so that was a prime matchup of two of the best juniors in the country at that time.” Still, McIntyre stressed giving Watson extra help, trying to keep McDaniels on the perimeter to limit his impact on the offensive glass.

In 2019, Federal Way had added 6-foot-8 forward Tari Eason (SBLive’s 2020 all-class state POY) from Garfield. When the teams met in the 4A state semifinals, Watson moved over and checked Eason, in hopes to match his physicality. So Shaedon Byrd, a burly 6-foot-1, 190-pound guard, had the duties of checking McDaniels with a nine-inch height mismatch. “We thought that it might bother Jaden having someone underneath him,” McIntyre said. “Shaedon did a remarkable job on Jaden.” Byrd emphasized pressuring McDaniels on-ball, boxing out and limiting the drive, forcing him to be an outside shooter. “Jaden still hit a ton of shots,” McIntyre said. “He went through stretches where he went five in a row.”

Nothing major. The Bullpups stuck to their gameplan throughout two up-and-down games where the teams traded the lead. Instead, McIntyre reiterated to his team: “Knowing he’s going to get some points, attacking on the offensive end and not shying away because he’s such a threat. I just wanted the guys to always be in attack mode. Really our best defense was our offense, being aggressive at him, getting some fouls on him and getting him off the court.”

It’s hard to second-guess when, at the end of the day, McDaniels was relatively limited and the Bullpups won — both times.

“I just think Jaden is so smooth. His mid-range game was the area that we couldn’t stop, at 18-feet. He hit five in a row in the third quarter. They just heated up and one was a three, but almost all of them were off the bounce, pull-up. We couldn’t get a good contest because he’s so long, he can always get a clean look — and he’s skilled. He has such a great skillset, it’s dang-near impossible to guard.”

How long did Union have to prepare?

The game the Titans took Federal Way to overtime, in the 2018 district tournament, they had eight days to prepare. And they used all eight of them. “The more time, the better,” Conley said, “we used every practice in that eight days to get ready for him.”

Conley knows first-hand what McDaniels can do on a fast break. Especially with Union at a significant size disadvantage with Federal Way. That’s why he made it an emphasis that his defense try to force Federal Way to play in the halfcourt. On one end, that meant limiting turnovers, and on the other end also keeping McDaniels outside the perimeter to minimize his impact on second-chance points. Defensively, Union deployed a hybrid of zone and man-to-man and sometimes left players unguarded.

Conley’s defensive fluidity, which seeks to disorient the offense, made many adjustments — on purpose.

“I think mixing it up with them is really important in the half court to keep them uncomfortable,” Conley said, “and you have to keep them thinking, rather than just running and getting steals and playing.”

In the OT game, Conley doesn’t second-guess himself. “In terms of the talent level, we had to do everything that we did, all the gimmicks, we were extremely proud of how we played,” Conley said. “It was unfortunate we didn’t win because I thought we executed very well. And I thought we did as much as we could against a team that was extremely, extremely athletic and extremely talented.”

How long did Enumclaw have to prepare?

Johnson said his staff approaches game-planning the same no matter the team.

“We were never going to compete with them athletically or even from a talent level,” Johnson said. “The challenge was trying to give our guys the confidence that we could play with them, because we had been so close.”

Johnson thinks it played in his team’s favor that they stuck with their usual man defense. And he has a point. Though the Eagles went 4-1 against Enumclaw during McDaniels’ time in the spotlight, they were largely held well below their typical scoring clip.

“We didn’t want to go into the game having our guys think they had to do something different,” Johnson said.

They emphasized being physical, denying the ball, blocking easy touches and easy drives to the rim. Anything they could do to slow and disrupt McDaniels, they tried. And Johnson knew they needed to try to limit Federal Way’s fast-break opportunities. McDaniels is at his most dangerous in space.

“Try to keep him on the perimeter, make him a shooter and contest the best we could,” Johnson said.

Enumclaw threw double-teams at McDaniels when he got the ball in the post, or drove to the basket. Other times, they let McDaniels cook a bit and averted pressure to some of his teammates. “If we could at least make him think about what was going on a little bit, that was the goal,” Johnson said. “How well we did with that, I don’t know. He still had monster games against us most of the time.”

There were times when Johnson thinks he should have had his team try to deny McDaniels the ball more. “You always can find small things as a coach,” Johnson said. “But you can only do so much. We just wanted to make him work as hard as he possibly could.”

“He did some things on the court against us that were unfair. Just unbelievable. At the moment you’re not all that excited, then you go back after and think ‘I can’t believe I just watched a high school kid do that. … it’s a lot easier now watching it then it was those few years.

“It was clear he was going to be an NBA player,” Johnson said, “so putting yourself in a position to win against a player like that is good.”

How long did Auburn have to prepare?

Typically Auburn had a two-day turnaround during league play to prepare.

As much as Auburn could, they tried to limit possessions. Federal Way scored more than 100 points on several occasions, and played fast. That meant using the entire shot clock. “We didn’t shy away from the fact that we knew they were better than we were,” Hansen said.

Auburn’s tallest player during that stretch was 6-foot-5, which left it susceptible to McDaniels’ active long arms on the offensive glass. Hansen found game-planning him to be a catch 22 of sorts. Push him out to the perimeter, and he’ll shoot over you. Let him work in the interior and if he doesn’t score on first chance, he’ll clean it up. The sweet spot was pushing him to the midrange, where he also shoots at a high clip.

“You’d rather have him at 19 feet than hanging around the basket where he’s so effective,” Hansen said. “When he’s knocking down those shots, what do you do?”

Auburn ran an extra defender at him to try to get the ball out of his hands, but that had diminishing returns. Hansen remembers coaching against Marvin Williams-led Bremerton teams, whose supporting cast was not to the caliber of Federal Way’s during McDaniels’ time. “He was a pretty good passer, played unselfish when he needed to and had a lot of talent around him,” Hansen said.

“Thing about Jaden that makes him so tough is he’s 6-10, he’s so long and his skillset,” Hansen said. “You think you’ve got a lay-in, everyone in the gym thinks it’s open and Jaden will come across the key out of nowhere and wipe it off the backboard. Which leads to him cleaning it up and leading a break in transition.”

“Even though we developed a little rivalry with Federal Way, we want to see kids from our league go on and succeed at the next level. It’s good for our league, good for our area. Rodney Stuckey did it. I’m excited for Jaden. I’ll definitely be a fan.”

How long did Richland have to prepare?

24-hour turnaround at the state tournament.

Richland upended Federal Way in the quarterfinals in 2017 when it was the two-time defending 4A state champions. That was McDaniels’ sophomore year, when he was more of a perimeter player. Beating the Eagles, Streufert said that day, was a top-three win of his entire coaching career.

Two years later, it was a much different challenge. McDaniels was every bit the 6-foot-10 slasher who could score at every level that had NBA scouts salivating, even then. Richland’s starting backcourt stood 6-4 and 6-6, and the Bombers liked to run — and play fast. But Streufert knew they couldn’t outpace Federal Way. So they focused on isolating his touches to half court sets and forcing him to get the ball outside of the paint. And secondly, limit his transition looks. Which is easier said than done.

“One bad pass turns into a dunk for him,” Streufert said, “and they punished us for that in the second quarter.”

Richland got out to a hot start with a 9-0 run. But Federal Way mounted a 26-6 run to establish a lead it didn’t give up. Defensively though, Streufert liked how his team executed.

Ultimately, could Streufert point out errors he’d have liked to change? Sure. But against talent-laden Federal Way and its lanky 5-star leader, he doesn’t second-guess.

“We were overmatched in a couple key spots,” Streufert said. “There are some things adjustments just don’t account for. They were just more talented than us.”

“Most high school teams you can game plan for one or two guys and make someone else beat you. Federal Way, there was no weak spot. And a guy like (McDaniels) it’s a real luxury to have. He can change a game. If the roles were reversed and we were up 14 and he wanted to change that, I’m not sure we could have stopped him.”