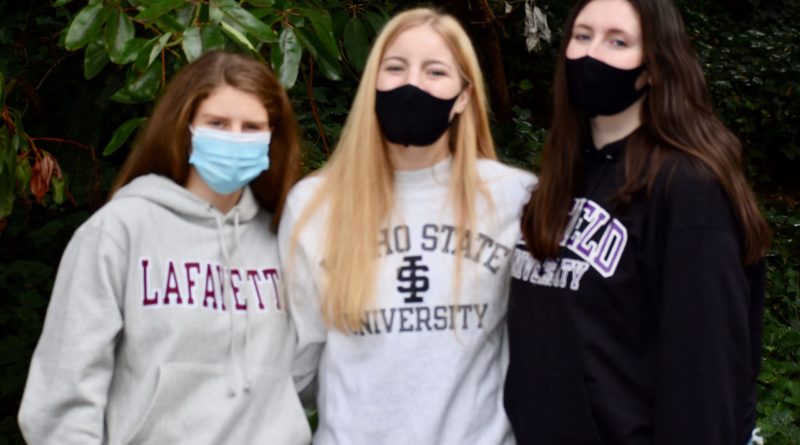 Given who showed up to sign their national letter of intent in the 2020 early signing period Wednesday – the King’s High School Knights are as talented as any girls basketball team in the state.

Who knows if they will get a WIAA season to make waves in the Class 1A ranks, but seniors Claire Gallagher (signed with Lafayette College), Mia Flor (Idaho State University) and Samantha Skaggs (Linfield University) know they will be playing at the next level.

Add in junior Jada Wynn, and this is quite an impressive nucleus of talent for a small-school program.

“(Having a signing day ceremony) means the world to us,” Gallagher said. “Coach (Dan) Taylor did a great job organizing it. … It makes me emotional.”

*Gallagher, the reigning 1A North Sound player of the year, had originally given a verbal pledge to play at Brown University. But after former coach Sarah Behn resigned in March, the combo guard re-opened her recruitment.

“I was on the phone constantly,” Gallagher said.

Gallagher reached out to Lafayette in Pennsylvania, one of the NCAA Division I programs that was initially on her radar. She respected its academics, particularly in the engineering field. And the coaches were “blunt … and valued what I could bring to the table.”

“It definitely feels like (I made) lemonade out of lemons,” Gallagher said.

*Flor has been one of the Knights’ best all-around players on the wing, and really kept NCAA Division I and II options open all spring.

Idaho State came in and offered Flor a scholarship in May. She visited the Pocatello campus in June.

“Honestly, I really love small-town colleges and those communities as well,” Flor said. “You can tell how much the community is invested in the college.”

After holding Zoom calls with a few of the players, she gave the Bengals a verbal commitment in July, joining a group of Big Sky Conference-bound standouts from the area, including Woodinville’s Mia Hughes (Montana State).

“I fee like I know one person from every (Big Sky) team that I played against in high school,” Flor said. “It is cool to go on and have those connections.”

*Wake up, Northwest Conference. The next Jamie Lange might be coming your way in Skaggs.

The 6-foot-3 post player is not only skilled around the basket, but she is a powerful force in the paint.

And she chose Linfield over George Fox, Puget Sound and Pacific Lutheran at the NCAA Division III level.

“I wanted to play D2 for a couple of reasons – going to a small school and academics were important,” Skaggs said. “After talking to my parents, I realized this was the best level for me.”

Skaggs made two separate visits to McMinnville, Oregon – one in July with her father, and the other with her mother a month later.

“On the second trip, I felt the same way I did in July,” Skaggs said. “It solidified my decision. I called Coach (Casey Bunn-Wilson) the following Monday, and said I was all in.”