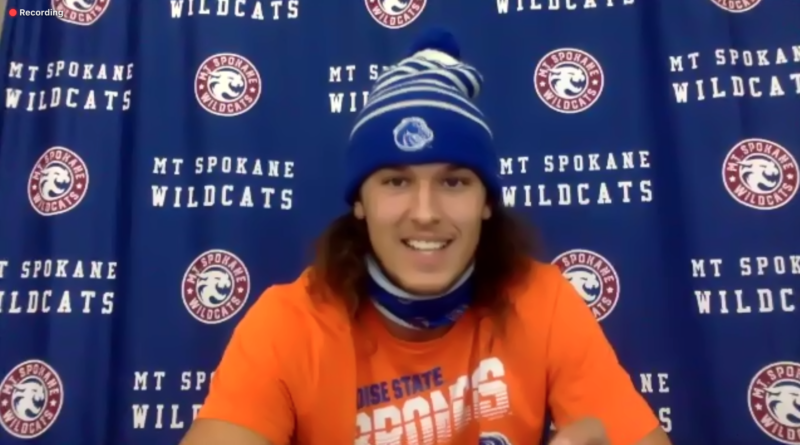 Mt. Spokane forward Tyson Degenhart signed his national letter of intent to play at Boise State on Wednesday afternoon on a zoom call with family, friends and basketball influences.

Draped in Bronco blue and orange and sitting in front of a Mt. Spokane backdrop, Degenhart doubled down on his decision to commit early to Boise State and honored his late grandfather, Clint Degenhart, who died in 2017.

“I know he’s been watching over me and seen me grow as a person and as a basketball player,” Degenhart said. “I know he’s proud of me.”

Degenhart was an all-state selection as a sophomore, leading Mt. Spokane on a surprise run to the 3A state title game, where it lost to O’Dea. He averaged 19.3 points per game that season and only built on it as a junior, honing his face-up game and taking defenders off the dribble. Wildcats coach David Wagenblast described him as a guard in a big man’s body.

He committed to Boise State in late Sept. 2019 after taking his lone official visit. Degenhart didn’t need convincing after visiting campus, going to a football game and spending time around the basketball program.

“It was the best decision I ever made,” Degenhart said Wednesday. “Looking back on how far I’ve come since then, I haven’t had a doubt in my mind that this was the right decision for me and my future.”

SBLIVE PLAYER DIARY: Tyson Degenhart give insight into his commitment

“We usually don’t get to be there for signing, so that was pretty cool,” Rice told Degenhart after he signed.

As a junior, Degenhart flourished as one of the most dominant and well-rounded big men in the state of Washington. His Wildcats made the 3A state playoffs, but lost in the first round. If given the opportunity to play in 2021, Mt. Spokane returns enough of its core to compete with any team in 3A.

When Degenhart honored his late grandfather, who he said died in 2016, he choked up.

“He was one of my biggest supporters when I was a young kid,” Degenhart said.