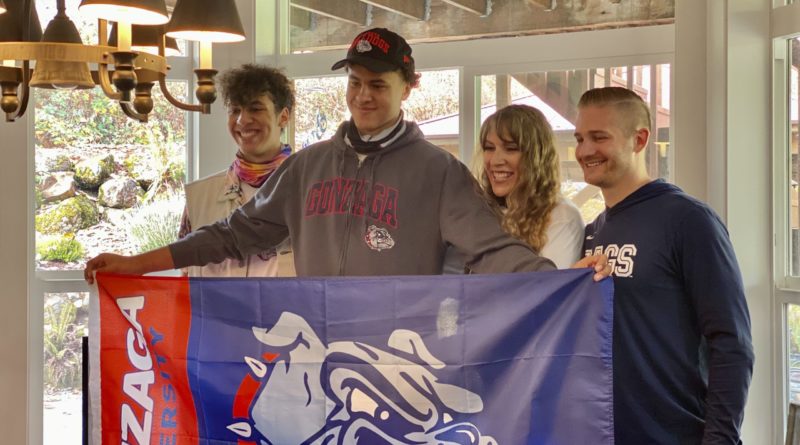 BATTLE GROUND — For Kaden Perry, the recruiting process was drama-free. As soon as Gonzaga offered, he committed. On the spot. And on Wednesday, as soon as he was able to put pen to paper on that commitment, he signed.

Perry was all smiles as he e-signed his national letter of intent to play at Gonzaga at a surprise gathering of friends hosted by Battle Ground coach Manny Melo, who has developed a tight bond with Perry over the last three years.

He sat in between his mom, De Lena Perry, and his brother, Kyren Perry. Several coaches who were a part of his early development were present, as was former BG teammate Vince McCormic. Melo ordered Perry’s favorite food — Panda Express.

“I wouldn’t want it any other way,” Perry said. “A bunch of the people here helped me get to where I am today. I owe almost everything to them, especially because all my work I’ve been putting in since I first picked up a ball is paying off right now and it’s it’s really special.”

Going into his fourth year on the varsity stage, Perry has grown from playing like a “baby deer” who possessed all the tools but hadn’t grown into his body yet, Melo used to say, to now, being regarded as a 4-star and the 75-ranked player in the country in the class of 2021 by ESPN.

It’s reasonable he would have jumped significantly with a full summer on the Nike EYBL circuit, which was canceled due to COVID-19.

Part of Perry’s motivation to commit early to Gonzaga was simple. He’d wanted to go there ever since he started playing basketball. His mom recalls Kaden making it a goal at a young age. Committing early also removed him entirely from the recruiting process, and he reasonably would have had his fair share of suitors had he waited.

“I think it’s a way different recruiting experience than most people take, but I loved it,” he said. “The recruiting experience is awesome. Being able to be locked in with the school you’re going to go to, you can already start building those relationships tighter than you would if you were talking to a bunch of different coaches. I have a great relationship with the coaching staff at Gonzaga.”

It’s one of the reasons Perry feels so confident despite not having visited campus in longer than a year due to the virus.

But much has changed for Perry since he committed to Gonzaga, site unseen, in June 2019. He recalls being so nervous, he thought he was going to be sick when after Gonzaga team camp in June 2019, he sat in a meeting with Gonzaga coaches Mark Few, Brian Michaelson and Tommy Lloyd and heard them offer him a scholarship.

The coaching staff laid out a plan for Perry to pack on muscle before stepping onto campus.

Some of Perry’s most notable strides in the weight room have come during the COVID-19 pandemic. Melo, who was hired as Battle Ground’s head coach for Perry’s freshman year, turned a shed at his house into a weight room and mirrored Perry’s workouts with him.

Perry finished the high school season around 215 pounds. He didn’t have trouble filling up the stat sheet as a junior, averaging 23.7 points, 15.3 rebounds and 3.3 blocks and leading Battle Ground back to the Tacoma Dome for the second consecutive year. But he knew if he wanted to follow the Gonzaga staff’s plan, he’d need to get even bigger.

“He’s obviously, putting a lot of muscle mass on right now, and he’s getting way, way stronger,” Melo said. “He just took a huge jump in his weight on his upper body lifts. He has the perfect frame for it. He has the perfect genetics for it. And he’s probably going to get even a little bit bigger now.”

It helped him against fellow blue chip recruits in AAU and at the Pangos All-American Camp, an elite invite-only showcase during the first weekend of November in Phoenix.

He cut his teeth on the national grassroots scene over the summer, joining Nike EYBL club Seattle Rotary. He started next to some of the state’s top players, including O’Dea’s Paolo Banchero, Eastside Catholic’s Shane Nowell (Arizona) and Kentucky-bound Nolan Hickman.

Perry said it made him a better basketball player, particularly defensively, and he grew tight with Banchero, who hosted him when he would come up to Seattle to play.

“Kaden is a great guy, great teammate,” Banchero, who signed with Duke Wednesday, said. “Gonzaga’s got a real good player. He’s going to develop into a real good player when it’s all said and done. And he was a great addition to the Rotary team. It sucks we didn’t get to play EYBL or anything, but the two tournaments we did play, he was dominant.”

During a recent call with Michaelson, Perry told him the amount of weight he was putting up — all personal bests, Perry said. (“It was the strongest I’ve felt in awhile,” he said).

Michaelson told him that would make him one of the strongest guys on the current team. So Perry has been joking with friends ever since, calling himself “the strongest Zag.”

“Hopefully no one gets me any flack for that,” Perry said, smiling.

But it could soon become a reality.

Todd Milles contributed to this report.