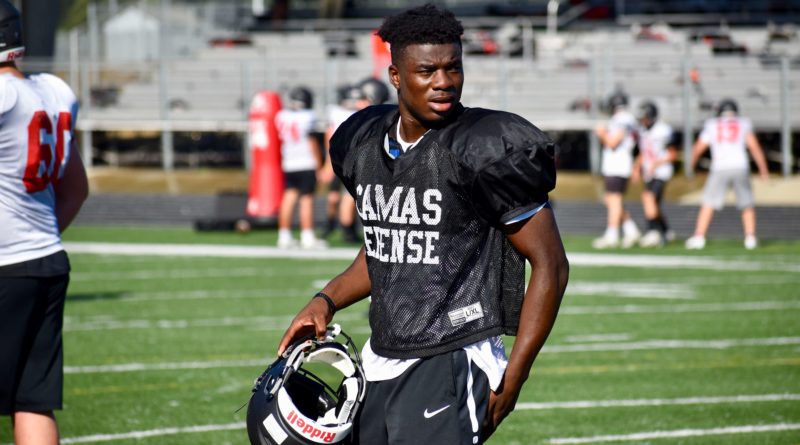 The first time Allen Jones recalls seeing Jacques Badolato-Birdsell was when the running back was an eighth grader playing in the “Paper Cup,” a local middle school rivalry game in Clark County.

Sure, Jones was the running backs coach at Camas High School, but he also loved watching football, no matter the level. One player immediately stood out above the rest.

“It was obvious who the best player on the field was, it was Jacques,” Jones said. “Immediate, that’s where my eyes go. He was just built different, even in 8th grade. But he was super raw. He’d carry the football away from his body like a loaf of bread.”

Jones witnessed, and helped facilitate, Badolato-Birdsell’s development firsthand over the coming years. He went from freak athlete — albeit raw — to an all-state running back for the 4A state champion Papermakers in 2019. Now, he’s a Division I commit.

Badolato-Birdsell announced his commitment to the University of Nevada on Friday evening, nine days after the Mountain West program extended him an offer.

“It feels good,” Badolato-Birdsell, who moved to Washington from the Democratic Republic of Congo in 2011, said about his decision. “I don’t have to stress about it anymore. Now I’m feeling relaxed. I feel great.”

He also held offers from Air Force, Georgetown, Portland State and Central Washington. And he’s the second current Camas player to commit to a Division I college. Quarterback Jake Blair made his pledge to Oregon State on Oct. 16 as a preferred walk-on.

Badolato-Birdsell’s rise to being the top-ranked running back in the state of Washington in the class of 2021 didn’t happen overnight. He played mostly corner as a sophomore due to a cast on his hand that made coaches hesitant to play him much as a running back. But when lead ball-carrier Shane Jamison went down with an injury in the Papermakers’ in the state preliminary round to Bothell in 2018.

He rushed for 176 yards and two touchdowns in the season-ending game.

“He was starting to show those glimpses of what we would see next year,” Jones said. “He was a warrior that day, and I knew with the offensive line coming back, a real special season could be ahead of him.”

He came back the next year with a vengeance.

He rushed for 1,559 yards and 29 touchdowns, despite missing several games nursing an ankle injury and ran for 216 yards and three touchdowns in a 4A state championship win over the same school that knocked them out the prior year: Bothell. He was named the 33rd most impactful high school football player in the state of Washington in 2019 by SBLive.

For Jones, seeing Badolato-Birdsell break out as a junior was a full circle moment.

And his reputation began to build across the state.

When Badolato-Birdsell first arrived at a three-day invite-only college ID showcase in early October with more than 100 of the state’s top uncommitted juniors and seniors, he went to introduce himself to now-four star quarterback Gabarri Johnson from Lincoln of Tacoma.

When the muscular running back “went and clapped up” Johnson and his teammates, the Lincoln players already knew who he was.

“They hated me,” Badolato-Birdsell said of the interaction, laughing. “They had to do up-downs as a punishment” for their 2019 season-opening loss at Camas. Badolato-Birdsell had 171 yards and a touchdown in that game, more than a year prior.

Badolato-Birdsell’s junior season left an impression on more than just his first opponent. In the wake of his commitment, the Camas running back remembers the first time he heard from his now-college of choice. It was after the Papermakers won the 4A state championship.

Nevada was always in the picture, he said, even through a spring, summer and fall where the coronavirus pandemic has shut down most football activities in Washington.

Badolato-Birdsell shined in a padded showcase scrimmage at the beginning of October, breaking loose for one long touchdown run and finding space when it was hard to come by. On the way back from the scrimmage, he said he got a DM from Washington State coach Nick Rolovich congratulating him on a good game.

Nevada offered on Oct. 21. Once he announced Nevada’s offer, several Pac-12 schools made initial contact with him to set up video calls. Oregon offered him a spot as a preferred walk-on, Jones said.

But his relationship with Nevada was going on 10 months since Taua first reached out. Badolato-Birdsell wanted to make his decision to lock in his roster spot and college plans to provide some certainty amid uncertainty ahead of the December national signing day.

Badolato-Birdsell will join fellow in-state standout Avery Morrow in the backfield for the Wolfpack. Morrow is a true freshman from Garfield who has made an immediate impact in Nevada’s backfield.

“I was just as surprised as Jacques that things weren’t picking up for him,” Jones said. “The pandemic didn’t help.”

The team that reached out to him early won out in the end.