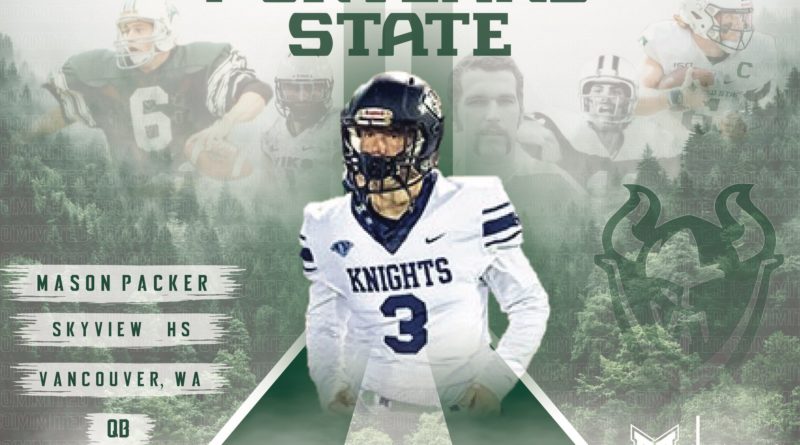 Mason Packer had told Portland State football coach Bruce Barnum he was committing to play for him about as soon as the coach offered him.

He’d informed his father, Brad Packer, a standout at Eastern Washington in the late 1990s, his offer, and intent to play for one of the Eagles’ Big Sky opponents. And he’d told close friends and coaches the news, too.

One thing stood in the way of Packer, a 6-foot, 200-pound quarterback/linebacker at Skyview, from becoming the latest Vancouver product to venture across state lines and play for Portland State. He still needed an “edit” — a graphic with his picture, photo-shopped into a celebratory announcement of his commitment for public distribution. He deployed Skyview grad Kiernan McDonagh, who did it as a favor. That meant waiting for weeks while he finished.

“I posted it like 10 minutes after he made it,” Packer said.

Packer would have waited two months if he had to. Behind his commitment is a long game, after all. He wants to be a football coach, and he’s treating his college football experience, in a way, as a training ground on how a football program is run.

It’s a goal he’s long held, but his convictions were recently strengthened when he got a job as a dishwasher. After his first two days, he called his dad, who is now Portland State football’s strength and conditioning coach.

“I was like, ‘I’m never working without football,’ ” Packer said.

“Since my dad’s been working there, I’ve just tried to go as much as possible. Go to all the practices I can to just try to learn, to be around it as much as possible. It’s been great. I can’t wait to continue that and learn even more because I haven’t been able to go to film meetings or anything like that, so I’m excited.”

The 247 Sports-designated 2-star quarterback was an all-1A Trico League honorable mention choice for King’s Way Christian as a junior. He left for neighboring big-school Skyview down the road when King’s Way — which went 5-5 in 2019 and produced 11 all-league selections — put high school football “on pause” and instituted a four-year plan to build up through its youth program.

Several of King’s Way’s top athletes transferred in the spring, such as point guard Bryson Metz to Union and Army commit Bailey Meek, a defensive lineman, to Ridgefield. Packer landed at Skyview, where he’ll spend his senior season under coach Steve Kizer competing for the starting quarterback job.

At King’s Way, Packer was a big-possession receiver, linebacker and backup quarterback. He grew up playing quarterback and former Knights coach Brian Rodriguez was taken by his effectiveness executing the zone read.

When Packer was tapped to step in as the team’s starter last season, he accounted for nearly 1,000 yards rushing and 1,000 yards passing last year.

Division II and Division III, as well as NAIA colleges were reaching out to Rodriguez with interest in Packer.

And then Portland State came in. Mason called me and he’s like, ‘you’ll never guess what just happened?’ I had no clue. He’s like ‘Barney just offered me.’ I’m like ‘let’s go!’ “

The Vikings didn’t need to talk to Rodriguez about Packer. He was around the program with his father. He was a known quantity.

Growing up with a father who played at Eastern Washington, Packer was always drawn to that level of play.

Years later, Portland State became part of his plan to play, then coach football. Even if it meant staying patient with a volunteer graphic designer (who himself played under Barnum at PSU) a couple weeks to announce publicly.

For Packer, the wait was well worth it.