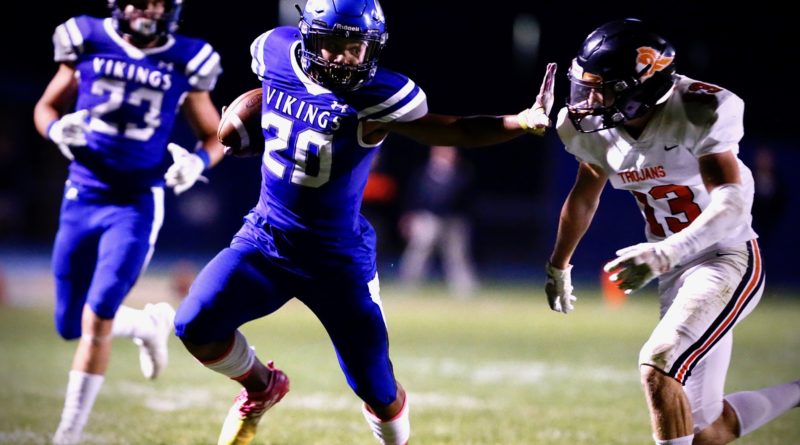 Under different circumstances, Griffin would consider the transition to be tougher.

But with high school sports on pause in Washington as part of the state’s response to the coronavirus, Griffin, a junior slot receiver, opted to cross state lines and transfer from Gonzaga Prep to neighboring Coeur d’Alene, citing the need to look after his grandmother.

It also means his burning desire to play high school football is met.

“Since I’ve got here the guys and coaches have just been like, accepting of me,” Griffin said. “And they’ve really been pushing me and helping me out.”

Eight weeks into the football season, Griffin is thriving for the state powerhouse No. 1 Vikings (5-0), who have outscored opponents by an average of more than 40 points through five games. He’s one of several athletes to move from West Coast states where high school football is not allowed due to COVID-19 into a state that is playing.

But not every prospective high school athlete lives near a state line. Getting the opportunity to strap on pads, he said, wasn’t exactly smooth.

Griffin’s transfer across state lines came at a time where a heightened level of scrutiny was being applied to transfers from states without high school sports to those where games would be played. After what Griffin describes as a long and “stressful” process, he became eligible just before the first game of the season.

The Idaho High School Activities Association rules do not allow athletic-based transfers unless the parent or legal guardian proves it is making a “Bona Fide Move” and submits an eligibility form.

Griffin moved in with his grandmother, Joyce Griffin, to help look after her since she lived alone in Coeur d’Alene. She became his legal guardian as a part of the eligibility process, Griffin says. His parents and younger sister, a freshman at Gonzaga Prep, live in Liberty Lake some 20 miles down the road.

Outside of football, life is different for Isaiah. He spends lots of time with his grandmother in her garden and helping taking care of her many cats and dogs.

“She makes salad a lot,” Isaiah said, “so just the nice fresh tomatoes and all the nice vegetables she puts on there.”

He learned a new position, too, going from playing corner and wing back at Gonzaga Prep to solely focusing on slot receiver. Griffin describes extra film sessions with coaches, who he has says have both pushed and encouraged him.

“It’s nice to know that there’s guys all around that are weapons on the field,” Griffin said.

And on a team that boasts unique talent and depth, opportunity struck.

When senior slot receiver Alex Walker went down with an injury, Griffin was already waiting in the wings, ready for his opportunity (the two play “F-slot,” one of CdA’s two slot positions).

“We had Isaiah step in and really fulfill that role,” Coeur d’Alene quarterback Jack Prka said.

And he capitalized on early chances, posting long highlight-worthy touchdown catches in the Vikings’ Week 6 and 7 wins over Post Falls and Lewiston.

First, he finished a 35-yard touchdown reception in a win over Post Falls with a nifty spin move. At the time, the play was his career highlight — until he outdid it the very next week, when he took a pass from Prka on a slant route 84 yards for a first-half touchdown against Lewiston.

It’s highlights like those he hopes will turn the heads of Division I college coaches. The 5-foot-10, 180-pound Griffin has dreams of playing at the University of Washington. So far, he says he’s been in contact with several Division II schools.

“It’s not even about the playbook, it’s about team chemistry,” Prka said. “He’s in my weights class and we joke around, we’re partners. He’s a really cool guy.”