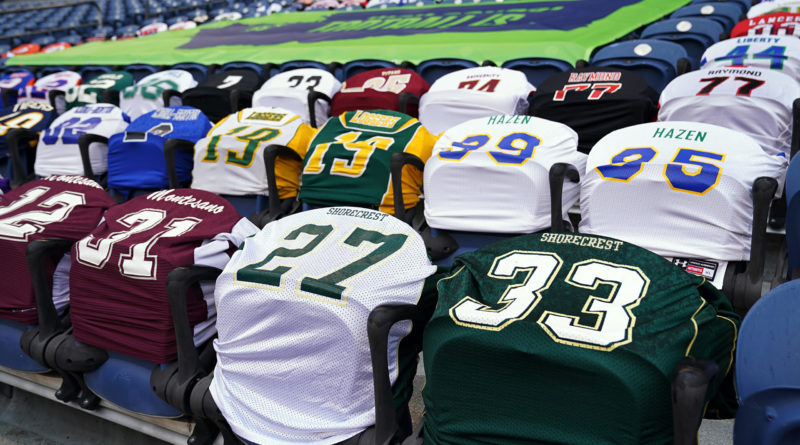 In his own words, Jeff Richards allowed himself to “dork out” before the Seattle Seahawks home opener on Sept. 20.

A former quarterback at Inglemoor and Woodinville High Schools in the mid-1990s, Richards is now the vice president of marketing and community engagement for the Seahawks.

With no NFL fans allowed at Seahawks home game until at least mid-October because of the COVID-19 pandemic, Richards put one of the organization’s cool in-lieu-of-’12s’ ideas in motion for the home opener vs. the New England Patriots at Century Link Stadium.

He displayed a mosaic of Washington high school football jerseys over two sections of empty seats on the east end of the stadium bowl.

“For me, it was like going back in the time machine,” Richards said. “Seeing the schools either I played against, or went to – I geeked out.”

Richards said once the organization realized the possibility of a no-fan start to the 2020 NFL season, it began brainstorming on ideas for a “visual presence” on that side of the stadium.

The priority piece of the exhibition was to first put a prominent “12” display in the center of the area, then build around it.

In an August meeting that included Seahawks president Chuck Arnold, Richards went over a few ideas, including a high-school investment.

“Chuck said, ‘I like your idea of high school football – what if we did jerseys?,'” Richards said.

Richards and the staff, which includes former Seahawks wide receiver Paul Johns, now the team’s director of youth and high school football program, immediately got in contact with the WIAA and the Washington State Football Coaches Association (WSFCA) for assistance reaching out to coaches and athletic directors statewide.

The Seahawks sent a shared Google document with all Washington high schools, asking them to fill out an application if they wanted to send along home and road jerseys for the stadium exhibition.

“The Seahawks sent me a pre-paid package and slip. All I had to do was put two jerseys together,” Mount Spokane football coach Terry Cloer said. “They said if it cost us too much financially, they would pay us back up to $200.”

Richards said approximately 150 schools participated leading up to last week’s game, and that he and his staff spent much of last Friday and Saturday “unpacking and cataloguing” those jerseys.

Many schools sent No. 12 jerseys to support the fans’ cause. Others sent No. 3 jerseys as a tribute to All-Pro quarterback Russell Wilson, or No. 54 jerseys to salute longtime linebacker Bobby Wagner.

Mount Spokane mailed two No. 30 jerseys as a tribute to all-state running back Kannon Katzer’s mom, who was killed last summer in a vehicle accident.

“She was a great lady,” Cloer said.

The night before the Seahawks’ home opener against New England before a nationally-televised audience, six staffers laid the jerseys out in two different spots in the east bowl.

In the center of both jersey displays are two giant banners with one clear message: “1, High School Football is … 2, Tradition, Community, Family.”

All corners of the state – Bellingham, Vancouver, Spokane, Wenatchee, Yakima and the greater Seattle-Tacoma area – were represented in the presentation.

“That is what has been really special – it is literally the whole high school community,” said Richards, adding that 30 more high schools sent in jerseys this week before the Dallas game.

“It wasn’t just, ‘Hey, let’s get the big schools and make sure we’ve got Eastside Catholic, Woodinville and Kennedy Catholic.’ We put this out to every single high school in the state.”

As far as “dorking out,” oddly enough, Woodinville sent the Seahawks No. 96 jersey – the same year Richards graduated from that school after playing football for Terry Agnew – and with current coach Wayne Maxwell.

“It is in a good spot,” Richards said.