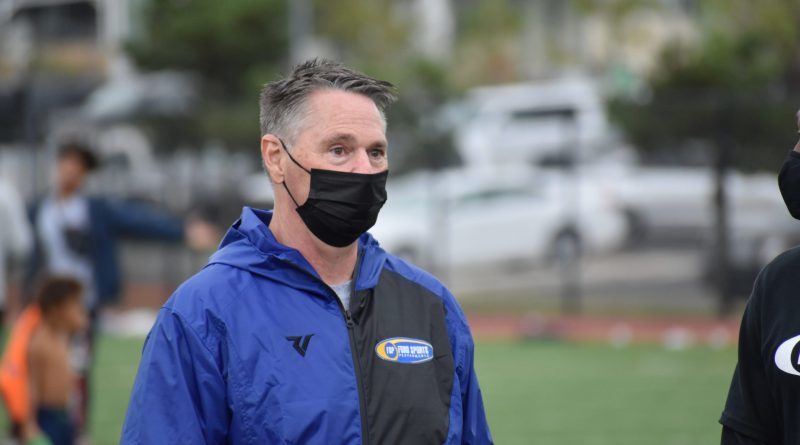 TACOMA — If you were a player assigned to the “blue” squad for Ford Sports Performance’s “College ID Camp” this weekend, you were in for a treat.

Butch Goncharoff was your coach.

Many of the 50-plus players had only heard of Goncharoff before the three-day camp and scrimmage Sunday at First Creek Middle Schools in Tacoma.

But once they got into workouts, meetings and heard the former 11-time state championship coach from Bellevue High School speak … oh yeah, it’s THAT guy coordinating the huddle.

“I quickly learned he is a damn good coach who teaches a lot of discipline with his players,” Seattle Prep quarterback Jake Sype said. “But he is light-(hearted) and easy once you get on his good side.”

“I was a spectator so much today, but it was crazy,” Goncharoff said. “With 56 guys, and to not know any of them, and to also put together a coaching staff, then an organized plan … it was more work than I thought.

“But I am proud of the kids and what the coaches did. We took it pretty seriously.”

Goncharoff made his name by winning 193 games at Bellevue, and leading the Wolverines to 11 Class 3A championships in his 16 seasons.

But when the program came under investigation for a number of violations, Goncharoff was dismissed in 2016.

A year later, he took over a smaller program at Cedar Park Christian, and spent two seasons there before being hired as the running backs coach for the Seattle Dragons of the XFL in 2019.

The Dragons played five games before the league folded at the outset of the COVID-19 pandemic in April.

Goncharoff, 56, said he has not done a whole lot since the spring, and isn’t sure what his next step in football is.

“I don’t know what I am going to do,” Goncharoff said. “I love (Dragons) coach (Jim) Zorn, and the XFL was fun. I have a feeling that it will be back around.”

When Tracy Ford, the founder and CEO of Ford Sports Performance, began organizing this weekend’s showcase event three weeks ago, one of the first people he called was his former coach – Goncharoff.

“I said, ‘Butch, I need you to coach,'” Ford said. “The reason why he is, in my opinion, the greatest high school football coach ever in the state of Washington – he is a perfectionist. He is so dialed in. He is so organized. When he does something, he does it right.”

Getting to instruct and organize a game plan was the biggest carrot in luring Goncharoff back to the sideline.

“I enjoy the teaching and the practice part of it,” Goncharoff said. “I don’t love games.

“This definitely got the juices flowing again, being around the guys and having fun.”