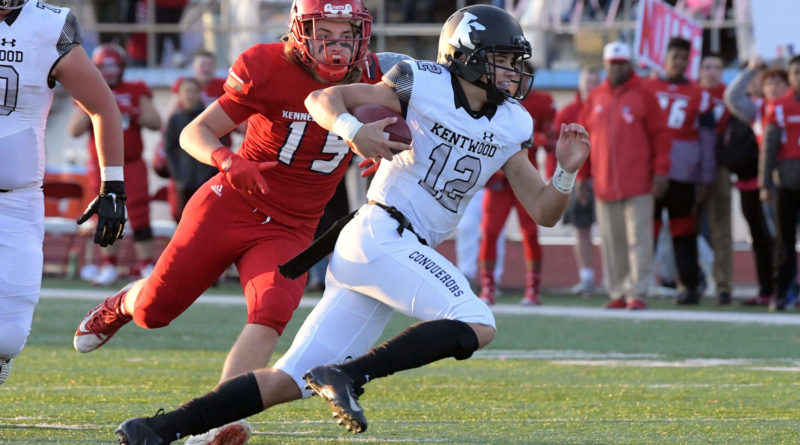 Jackson Proctor has time. More time than the Kentwood quarterback typically would have had in a typical fall day.

While his senior high school football season is on pause due to COVID-19, Proctor has turned the extra time into 15 pounds of muscle, increased his speed and agility and, most notably, chosen a home for the next four years: Dartmouth University.

“It’s something I was really happy and proud about,” Proctor said. “I’ve worked a long, long time for most of my life to get to this point. And it feels really good, but it’s only the beginning of the next steps of my life.”

The 6-foot-1, 195-pound Proctor, who announced his commitment Sept. 15, has long prided himself in being a three-sport athlete throughout high school, even as an upperclassmen when the demands of each sport intensified.

After played quarterback behind the ever-explosive former Eastlake standout Grady Robison, and also splitting time as a wide receiver, he transferred to Kentwood for his junior year after winning a quarterback battle and taking the reins as QB1.

From there, he flourished in the role, flashing a strong arm and quick feet. Kentwood made the 4A state tournament, where it lost narrowly —17-14 — in the first round to the eventual 4A state runners-up Bothell.

He logged 1,496 passing yards and 315 rushing, with 14 passing touchdowns and seven touchdowns on the ground with a 62 percent completion rate as a junior as the Conquerors went 8-3.

So Proctor took a trip out east with his family for an unofficial tour, since the NCAA shut down in-person recruiting due to COVID-19. Of the schools he saw, Dartmouth stood out. He liked the college town feel of Hanover, New Hampshire, enjoyed his conversations with alumni and how tight-knit the players seemed.

“Lastly, I’d say the coaches,” Proctor said. “The coaching staff, I had really good chemistry with. They’re always wanting to talk, asking how I’m doing and I feel like they really cared for me and my aspirations and those were the setting points for me in my decision.”

Plus, the Ivy League education sure didn’t hurt.

As a senior, Proctor plans to take an even bigger step forward. That’s, in part, thanks to beefing up physically, as well as  the Conquerors’ new offensive coordinator, former Washington State standout and six-year NFL player Brandon Gibson, who has already imparted his NFL pedigree in an overhaul of the team’s offensive playbook.

That means more responsibility on Proctor’s shoulders. But he knows a complex offense is only as effective as its personnel, as well as the guy running the show, which has added homework to his offseason training regimen: a complete mastery of the playbook.

“A lot of it is on me,” Proctor said. “But that’s what the quarterback position is. You’ve got to read the offense, you’ve got to run the team. I’ve got to study and I’ve got to know my stuff like it’s the back of my hand.

“So that’s what I’ve done. And it’s made me really appreciate the position, because there’s a lot that goes into it. And it can get pretty tough at times. But if you simplify it, and make it easier for yourself, you game simplify the game pretty well.”