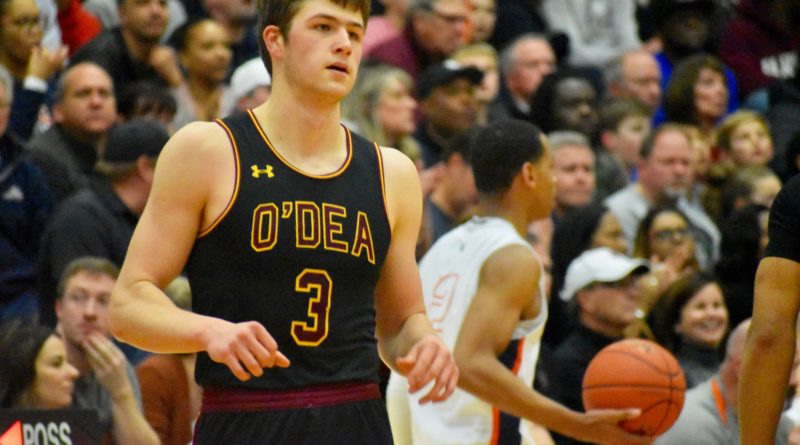 O’Dea shooting guard John Christofilis announced his commitment to Creighton on Friday, marking the end of a recruiting journey that began when he burst onto the Seattle high school basketball scene as a freshman.

“I’m fired up. I think fit-wise, it was perfect,” Christofilis told SBLive Washington on Friday. “They like to let it fly, as do I. They run a really fast offense, which I’m used to at O’Dea.”

He also held offers from the likes of Washington, Washington State, Colorado, Oregon State and Loyola Marymount, many of which poured in steadily in the months since his junior high school season ended in March.

As a junior, he averaged 11 points and scored in double-figures 13 times with three 20-plus point games for the 3A state runners-up.

Though college coaches have come knocking since his freshman year, Creighton entered the picture in August.

Through zoom interviews with coaches and an unofficial visit to campus, Christofilis saw how close the players are to one another, and was impressed with the work ethic that seemed to permeate coach Greg McDermott’s program, which has made the NCAA tournament 11 times since the turn of the century.

He was also drawn to Creighton, a Jesuit school, because of his faith. Religion plays a significant role in his life, and he was excited by the prospect of having a church on campus and studying theology. He also has a relative who is a Jesuit priest.

“What I really look at is cultures,” Christofilis said. “That culture was really similar to the O’Dea brotherhood. Tight-knit. Everybody knows each other.”

As a freshman, Christofilis made an immediate impact with his quick release and knock-down shooting abilities, averaging nearly 10 points per game and cracking the starting lineup in the grueling Metro League.

Colleges were taking note, too, of the sharpshooter who flashed upside and was still growing and learning from one of the most accomplished coaches in the state in Jason Kerr. He sustained several consecutive foot injuries that sidelined him for much of his sophomore high school season and lingered well beyond. He’s now 100 percent healthy, he says, and finally feels well-past the injury bug that followed him for seemingly much of his high school career.

Christofilis has put on 10 pounds of muscle and filled out to 200 pounds since March.

“I think he really utilized his time in the weight room getting stronger these past six-to-eight months,” Washington Supreme coach Carl Howell said. “He had a play in Phoenix where he dunked one off the block that really surprised me. I didn’t think he was that bouncy.”

“The Big East, obviously they’re not small over there,” Christofilis said. “You’ve got to be strong and hold your own. So I’ve really been emphasizing (building strength).”

Howell was asked in early August by a mutual friend who had close ties to the Creighton coaching staff and had seen footage of Christofilis playing in a tournament in Boise. He liked what he saw, and forecasted the 6-foot-4 guard fitting into the Bluejays’ system. The Creighton staff must have agreed.

Washington offered him midway through his freshman season during Mike Hopkins’ first year as the Huskies’ head coach. Christofilis missed most of his sophomore high school season with a broken toe, which required surgery that also kept him out of most of the spring and summer AAU seasons — a stretch where he could have reasonably seen his recruiting take off.

SBLive Washington identified Christofilis as the 26th most impactful player in the state during the 2019-20 season. He’s the latest at O’Dea to make his college decision since Paolo Banchero, one of the nation’s top prospects, committed to Duke in late August.