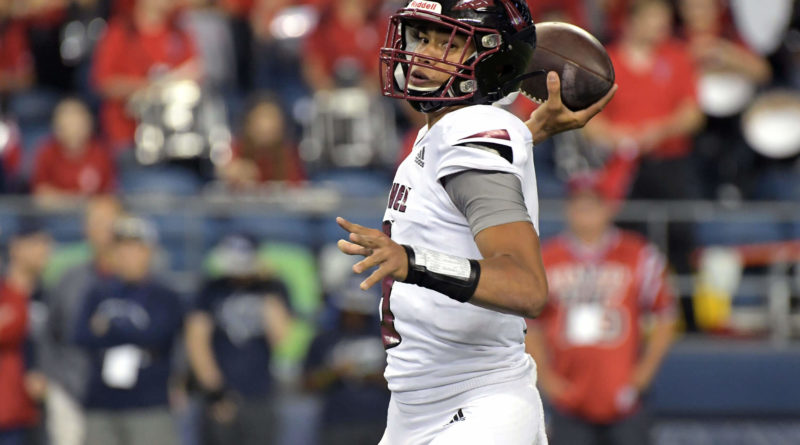 Kekoa Visperas experienced the uphill battle a quarterback his size can face in the college recruiting process.

Add a pandemic that both shut out his opportunities to throw in front of college coaches in the spring and postponed his senior high school season until after signing day, the 6-foot, 190-pound Bethel standout felt the forces working against him.

And he kept his head down.

Visperas didn’t hesitate when he gave his verbal commitment to Eastern Washington, which he announced Wednesday, shortly after the school offered the Bethel standout. It marked the culmination of a two-month stretch of proving he was a Division I talent and feeling out the coaching staff.

“The process was difficult,” Visperas said. “My mindset was if I work hard and I know I’m doing as much as I can that I can control, that I’ll find a path. Hard work doesn’t go unnoticed, I feel like.”

It certainly didn’t in his case.

Visperas, a 3-star according to 247 Sports, chose the Eagles over Central Washington and Colorado School of Mines. He’s the third in-state recruit from the class of 2021 to commit to the Eagles, joining Kamiakin standout receiver Woodley Downard and tight end Messiah Jones, who in July committed within days of one another.

Before Visperas heard from EWU offensive coordinator and quarterbacks coach Ian Schoemaker, Eagles safeties coach Zach Bruce reached out to see about Visperas’ prospects playing in the secondary. The lifelong quarterback was intrigued.

After all, he boasts 4.6 40-meter dash speed and could reasonably be plugged in all over the field. At 6-foot, 190 pounds, he thought, maybe defense was a good fit.

But Visperas is also an effective play-caller and deep down, he knew he wanted to be a quarterback in college. As a junior, he threw for 2,224 yards and 20 touchdowns with a 62 percent completion percentage and five interceptions. He also ran for 311 yards and four touchdowns and helped lead Bethel to the 3A state quarterfinals.

He leaned into his talent under center, which coaches say only bolstered by his versatility.

“You can do anything you want with him,” Bethel football coach Mark Iddins said. “We have the deep ball with him because of his arm strength. You can throw intermediate stuff, it opens up the run game and you put him and Will Latu in the backfield. You don’t know who to key on.”

Vispera saw some time as a varsity quarterback as a freshman at Eatonville. As a sophomore, he played defensive back and wide receiver, before deciding to transfer to Bethel.

His transfer to Bethel was anything but smooth.

The entire week before Bethel played its 2019 season opener against Kennedy Catholic, the team spent all week of practice under the impression that Vispera was not athletically eligible. His eligibility was being appealed with the WIAA, so Iddins slid in receiver/corner back Puka Sokimi over to QB1 all week in practice.

Visperas recalls hearing right as school got out, mere hours before kickoff, that he would be starting under center against top-ranked Kennedy Catholic (4A) and its 5-star defensive lineman Sav’ell Smalls in a nationally televised game (ESPNU) at CenturyLink Field.

“That was one of the craziest days of my life,” Visperas said.

His 224 passing yards on a 56 percent completion rate that day turned heads, and gave the Lancers kept Bethel within a touchdown of the star-studded Lancers.

That put the very thing Iddins lauds as his unsung talent — pure arm strength — on full display. A year later, coaches at Eastern Washington would want to see his rocket arm in person before officially offering him a scholarship.

Visperas says he grew up always having a powerful arm. He later combined that was solid throwing mechanics, which he credits for most of his power.

“He’s just got this explosive arm talent that is just really off-the-charts for a high school kid,” Iddins said. “The ball just pops out of his hand. He’s just got this natural throwing motion and once I saw him throw I went, man, this kid can definitely be a Division I quarterback just with the arm talent.”

When he got the chance to show it off months into a pandemic that sidelined high school football in Washington during the height of his recruitment, Visperas took center stage.

He finished second overall at the Northwest 9 Showcase, a competition pitting the top quarterbacks in the region against one another, in early September.

Through the ups and downs of his high school athletic career, Visperas maintains that his ability to stay focused on playing in college helped him.

“That was something that was huge for me. I kept my head down and hit the field every day, if not twice a day. I went to the gym every single day of the week. That was my pride. That’s what I held myself to.”