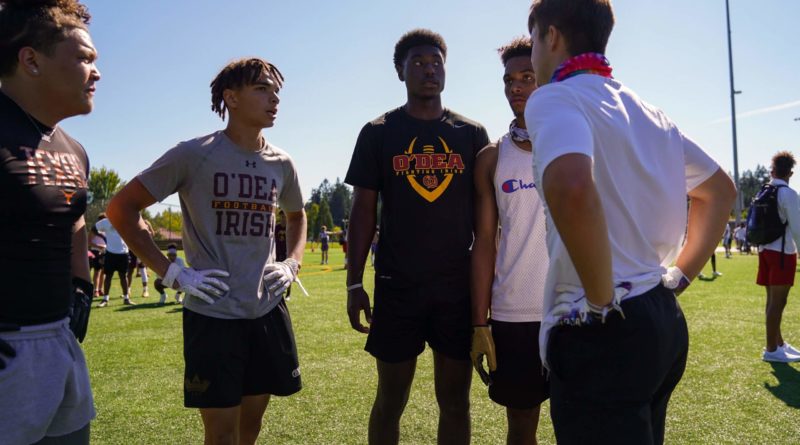 Milton Hopkins’ senior year started much differently than he thought it would.

His first few days of his senior year were spent adjusting to an all-online learning model instead of in classrooms at O’Dea High School. And instead of strapping on pads after school every day to practice with his defending 3A state runners-up Fighting Irish, he was playing tournament organizer, referee and quarterback at a 7-on-7 tournament of his own doing.

The brainchild of Hopkins — “COVID 7s,” as he calls it — is a 7-on-7 passing league football tournament at Tyee High School featuring 14 teams from high schools around the Seattle-area that has now been extended across two weekends. He received help from several friends, including Kennedy Catholic 4-star receiver Junior Alexander.

“It ran pretty smoothly, especially on Sunday,” Hopkins said. “A lot better than I expected.”

It may have taken other schools by surprise, too.

Hopkins’ phone has been lighting up with requests from area high schools to join his next tournament. Throughout this past week, as he and other athletes organized a petition and a rally at the state capitol in Olympia asking the governor and the WIAA to resume the fall sports season, he was also actively creating an opportunity for more schools to compete.

He expanded his COVID 7s tournament to a second weekend, only the bracket ballooned to 22 teams.

The idea came after Hopkins and Kentlake quarterback Nate Beck had scheduled a 7-on-7 game between players from Kentlake and O’Dea. Beck asked Hopkins what he thought about opening it up to teams from other high schools. So Hopkins posted a public inquiry aimed at other teams on social media.

“Next thing I know, like 60 people showed up,” Hopkins said.

Hopkins modeled the rulebook after his experiences playing 7-on-7 with Ford Sports Performance and he crafted the schedule. Alexander reached out to local videographers.

Despite six months of limited exposure to college coaches during the COVID-19 pandemic, Hopkins was already on the radar of some colleges.

The 6-foot-5, 220-pound Hopkins played quarterback for O’Dea last season and projects as a linebacker in college. He’s fielded offers from Fresno State, San Jose State and Nevada, though he still thinks his recruiting would be in a different place if he had a full spring and summer of showcases and a fall high school season.

“COVID definitely hit me hard,” Hopkins said. “I’ve been in communication with some coaches here and there and then next thing you know, I don’t really be hearing from them. They all have expressed and told me that they were interested in me, but they were just waiting on my senior film.”

Kennedy Catholic won the first weekend, beating Rainier Beach in the championship behind Sam Huard, the No. 1 pro-style quarterback recruit in the country, and his trio of elite receivers — Washington commit Jabez Tinae, three-star Reed Shumpert and Alexander, an Arizona State commit.

While events like the COVID 7s tournaments can’t completely replace the value that a high school season provides in recruiting, they serve as opportunities to compete.

“It’s encouraging because after that a lot of people told me that it was a great event,” Hopkins said. Among those people was former NBA player and Seattle basketball icon Nate Robinson, whose son Nahmier Robinson, a returning all-league selection at Rainier Beach, competed.

Praise from the adults rang loud for Hopkins.

“You guys did an amazing job,” Kent-based sports photographer Steve Faber told Hopkins in a comment on Instagram. “You got a lot of great teams there to compete. Tourney ran smoothly and on schedule. Officiated your own stud. You should congratulate yourselves.”