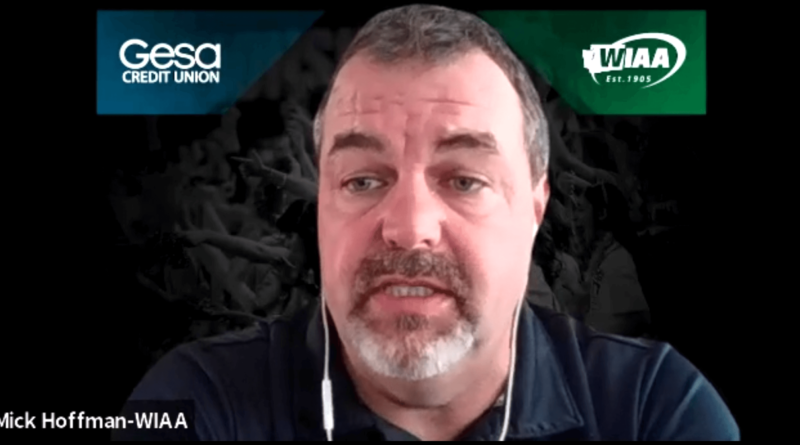 Alongside WIAA Executive Board President Tim Thomsen, Hoffman voiced support for the students using their platforms and voices in an educated way while addressing the realities presented by the ongoing coronavirus pandemic that shape Gov. Inslee’s response and informed the WIAA’s decision to postpone high-risk fall sports such as football to the spring.

Here is video of the entire press briefing. Below, the most relevant questions and answers have been transcribed and condensed for clarity:

“As a former social studies teacher, I think it’s awesome that kids are stepping up, seeking answers and getting involved in the process and not just feeling like victims. It’s great.

We’ve had a lot of inquiries from parents, community members over the last few months and a lot of it falls on the political divides and we really don’t want to get into the politics of this, we really want to stay focus on providing opportunities for kids.

The way we got here as the WIAA is the guidelines — from NFHS — and we tailored those guidelines to the governor’s four-step plan and the department of health (who have access to the best scientists).

As schools started, there were concerns about what the optics of letting kids on campus, five kids in a pod kicking the soccer ball around. The Governor’s office recommended no extracurricular activities with all remote learning. It caught us a little off-guard, but we understood the intent trying to help school districts get up and running and focus on education.

Risk management groups came out and told schools if they did not follow recommendations by the department of health and the governor’s office that there could be insurance concerns. That, in turn, prevented schools from really offering anything — even the schools that wanted to do it. That shifted what we were able to provide and offer the membership.

The (petition) focuses a lot on football and we don’t even had the metrics yet from the state agencies on what phase we have to be at (to play football). We were told phase four-plus for wrestling, football, competitive cheer-dance. We don’t know what four-plus is. We don’t even have a target yet. Our board made a decision based on the guidelines we were operating under.

The one question we have … why are guidelines different for youth sports than school sports? Education-based (sports). We don’t know. We’re waiting for clarity on that to see if we need to or can adjust our guidelines accordingly. That’s where we are to date.

We support student voice, we appreciate them asking the question and we don’t mind being challenged on those. We feel like as an organization as a mission is to support all kids and provide an opportunity and this is a great example of the extended benefits of education-based activities when you get situations like this.”

Question: What would it take for kids to get what they want?

Hoffman: “Right now, ultimately, they’re local decisions, but if the recommendation is ‘no extracurricular activities,’ it’s going to be very difficult for the school board and superintendent to go against that recommendation, understanding the potential insurance implications and other factors. I guess what we need to see is a continued decline in rates and the department of health and governor’s office continuing to do the work they’ve been doing on evaluating at what point it is safe. And, again, all these decision made by all agencies, including ourselves, are based on the health and safety. Right now we have the recommendation that the metrics need to be 25 per every hundred thousand for 14 days before we’re at a low-risk, which would allow schools to go back to in-person under 100 for a hybrid (learning) and if the recommendation remains, no extracurricular activities.

We’re hoping to get clarity, maybe some of this stuff can happen online — forensics, thespian, music — because those are extracurricular as well. I know they have a lot of other items on their plate, so we just need a little more clarity on what these guidelines mean, because then these risk management groups can help define options for school districts.”

Question: Could a district do a season without the WIAA’s blessing?

Hoffman: “Great question. We are member-driven, so they are local control for that. We see that a lot in the middle school where they’ll run their own middle school league. A lot of times we see the they’ll use our guidelines, they just won’t be members. Right now, what we’re hearing is it’s not so much having a league, because you’d need multiple school districts involved in that — a larger district, maybe, but a smaller district probably not — but it’s really just having the ability, and again the insurance piece is critical. Think about it. We’re not going to go drive our car without insurance, I hope. A school district without liability coverage really puts their community in a very difficult situation. I know that’s probably the biggest challenge out there, at least that’s what we’re hearing. But yeah, there’s local control. They definitely have that option.”

Thomsen: “I think it’s also important to note that all of our school districts are also governed by our county departments of health. They’re telling (districts) where we are in our phases, what we’re allowed to do. They’re our experts. We’re not experts, we have to depend on those folks to do that. There’s a lot of different layers here and Mick and the staff at WIAA have done a great job trying to navigate these ever-changing waters. It would be very difficult for a school district to go out on their own and go against the county department of health and state guidelines.”

Question: What would be your message to kids who are rallying, whose message seems heartfelt?

Hoffman: “First, great work. You should advocate for yourself and what you want. And the second piece is, get answers to the questions. And unfortunately right now, no different than what we’re seeing in a lot of other aspects of our state or country or community, folks in situations who can provide those answers like Tim and I and the rest of the board, we have to give answers people don’t want to hear. That’s no fun. I went into teaching because I like working with kids. And I took this job because, wow, you get to impact across the state and be a positive influence on hundreds of thousands of kids. So to have to deny the opportunity or be a part of the process

That can’t allow what they want … I would say we hear you, we want to be out there more than anything. I can’t wait to get questions from the media about moving a tournament, or some other controversy that happens in a competition, because that means we’re playing, kids are getting to play. It was a big part of my life, and for people who work in this business, it’s a big part of their lives. And a benefit to today, what’s going on in Olympia is kids are getting motivated and educating themselves on how to be a part of the solution on whatever that looks like.”

Thomsen: “We’re really thrilled with kids taking a stance and following thorough with it. As a board, though, we have priorities and No. 1 is safety. And No. 2 is the social and emotional health of our kids. And to be honest with you, the petition and marching in Olympia, that probably benefits them socially and emotionally because they are taking a step, they are moving forward. That’s one of the reasons we apply that. And the third priorities is giving themes and individuals an opportunity to meet their goals. So we can’t miss the first two to get to the third one, but the science keeps getting better, better studies, more information and w’ell continue to make adjustments as that information comes in. I’m no expert on COVID. There are people much better at making those decisions to tell us what is safe, how can we do it safely, so we’re going to follow those recommendations and guidelines, and we’re going to encourage additional studies and information going forward. And we’ll make adjustments if it does. … it’s hard to sit here in my office and look out at Sunset Chev Stadium in Sumner and not see kids out there playing. Hard on all of us.”

Hoffman: “I’m in daily communication with at least one or two of the 11 other western state executive directors. A lot of them are in states that are playing, so we’re actively tracking how it’s going, what are they doing, how are they dealing with outbreaks and we’re, in turn, sharing that information with our contacts at the department of health and government’s office. … we’re trying to bring the sports-specific information to them so it’s all readily available.”

On scheduling, phases in the governor’s Safe Start plan.

Hoffman: “If you look at the phases, over half of the counties across the state would not be able to have any type of competition beause they’re in phase two or 1.5. And with the freeze on moving phases — and again, it’s not the governor’s fault, not the department of health’s fault, it’s here’s what they’re hearing from science is the best health and safety. Most of our schools couldn’t even participate in a cross country meet even if they wanted to, based on those state guidelines. For football, we don’t even know the metrics yet for the target we can hit to provide a football game. And I’m going to guess with what they’re studying in states that are playing, we’re going to have a really good idea, including what we can do for spectators, because kids want to play in front of friends and people who love them, their family. I know that’s all a part of the planning at the department of health is they’re reviewing these guidelines for us.”