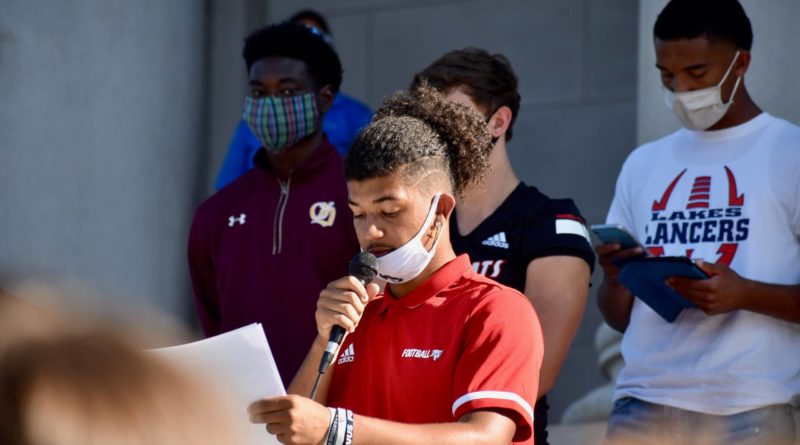 OLYMPIA — A collective voice for the resumption of WIAA fall sports – especially football – gathered on the steps of the Washington State Capitol building on Thursday afternoon.

They weren’t of doctors spitting out decreasing COVID-19 case numbers, or of lawyers explaining liability loopholes.

Instead, the pleas came from the student-athletes themselves, who came from all over western Washington to convey a simple message to Governor Jay Inslee and other state powers that be.

It was all part of an organized rally by the State Athletes of Washington (“SAW”) group, which aims to have all high school fall sports seasons reinstated.

“It is big to be able to use our voice in this way – to speak a message for everyone, and not just football, but all student-athletes,” said Eastside Catholic defensive lineman J.T. Tuimoloau, arguably the top senior football recruit in the nation.

This all started July 21 when the WIAA announced it was restructuring its upcoming athletic calendar, moving higher-risk sports such as football, basketball, volleyball and wrestling to 2021.

That is when a few football players at Kennedy Catholic started talking about organizing a student-athlete protest, said Sam Huard, the nation’s top pro-style quarterback in the country for the class of 2021.

They started a petition to gather signatures in support of reclaiming a fall season (which has gotten nearly 30,000 supporters to sign). And they all took turns speaking at the rally, which drew athletes from as far away as Naselle and Bellingham.

“It made me a little nervous knowing this can affect a lot of seniors in Washington,” Lakes High School linebacker Jaedon Hall said. “We are speaking as one big senior class, and for every single athlete in Washington.”

Asked about the petition and rally, Mick Hoffman, Executive Director of the WIAA, said as a former social studies teacher, he supports students stepping up and getting involved in the process “instead of feeling like victims.”

“We support student voice, we appreciate them asking the question and we don’t mind being challenged on those,” Hoffman told reporters Thursday.

Ford told SBLive Washington he communicated with the governor’s office on Wednesday and the office agreed to meet with student next week to discuss the issue.

The WIAA, however, is more hamstrung. As many school districts across the state start the calendar year online-only, the governor’s office made the recommendation to the WIAA that no extracurricular activities take place in an online-only learning model. And in the return-to-play guidelines, approved by the state’s Department of Health, the return of football and other high-risk

“It caught us a little off-guard,” Hoffman told reporters Thursday, “but we understood the intent trying to help school districts get up and running and focus on education.

“Risk management groups came out and told schools if they did not follow recommendations by the department of health and the governor’s office that there could be insurance concerns. That, in turn, prevented schools from really offering anything — even the schools that wanted to do it. That shifted what we were able to provide and offer the membership.”

Some of the speaker highlights Thursday:

“I am trying to play my senior year, and this is hard,” Lokeni told the crowd. “I take this personally.”

He even called a friend playing football in Georgia to discuss how effective those protocols were.

*Mount Si High School running back Cole Norah and Skyline High girls soccer player Malia Kuhl spoke about their personal challenges in college recruiting not being able to showcase their skills in person to those coaches.

“Highlight videos can only get you so far,” Kuhl said.

*Tuimoloau emphasized that even though he was a high-visibility recruit, he was more concerned about getting a season back for his “brothers and sisters.”

“We all want to play for our schools, our towns, our communities,” he said.

Shumpert gave a presentation on how no sports can lead to mental-health issues, including depression. Hall noted when teenagers have no extra-curricular activities, including athletes – crime rates rise.

“They expect us to be (online) with school for eight hours a day, and then we’re done with it, and then what? There are no organized activities,” Huard said. “They are forced to stay home all day with really no interaction with others.

“It is important we get back to these activities – with structure, and with coaches and actually be in an environment where you’re forced to take these health measures and follow those guidelines, making it a lot safer than it is now.”

*Huard, who is committed to the University of Washington, closed the rally by touching on all the important factors why fall sports should return, then offered SAW’s suggested return-to-play timeline for football:

“At some point, we have to move forward,” Huard said.