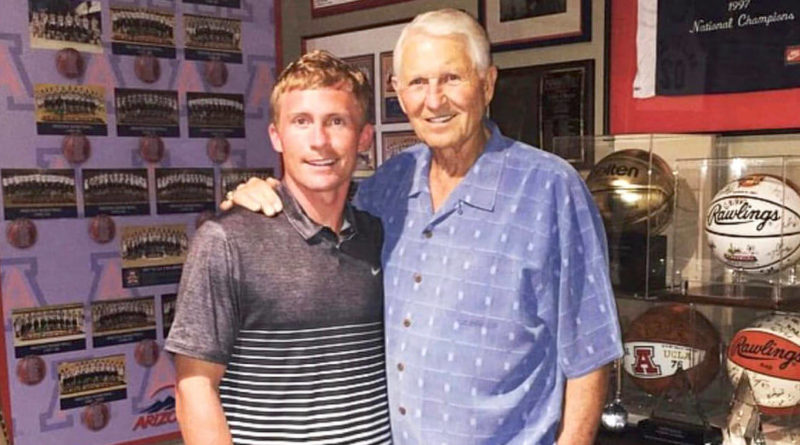 When Kevin Love was the preeminent high school basketball recruit out of Oregon, he asked his teammate if he wanted to meet one of his childhood heroes.

Jake Jackson wanted to be an Arizona Wildcat since he was in fourth grade. Then a guard at Lake Oswego High School (Ore.), his teammate Love brought him to meet one of the coaches actively recruiting him — Arizona’s Lute Olson.

When the two met, Love told Olson that Jackson would be attending Arizona the following fall. Olson extended Jackson a business card, and the next day, a position that ended up defining his college experience (as a team manager, then a grad assistant) and helped steer Jackson into coaching at the high school level. It’s one Jackson, who called Olson “like a father figure,” recalls fondly in the wake of the coach’s death Thursday at 85 years old.

Olson hadn’t just lifted Arizona’s basketball program to national prominence, making 23 consecutive NCAA Tournament appearances and winning a national title in 1997, he’d given Jackson a home and an inside look at how he runs a program during his last two seasons before retiring.

Olson suffered a stroke in February and spent time in hospice care, according to multiple reports. Much of the basketball world — professional and college — has honored the late coach in some way. Jackson received a call from Olson’s wife, Kelly, the night before he died. She put him on speaker phone, and he was able to tell Olson how he felt.

That stretches down to the high school level, where Jackson honors Olson’s legacy every day, now at Sumner, where he’s been since 2016. He previously coached at Peninsula for four seasons.

Jackson was a student manager at Arizona during a transitional phase in the basketball program’s history. Olson retired after his sophomore year, and Jackson experienced four coaching changes in his five seasons in Tucson.

Even after Jackson graduated, Olson called and texted. When he was in Seattle, they would go get dinner. When back in Tucson, he’d go to Olson’s house for dinner.

“He was just a very loyal person beyond basketball,” Jackson said. “He didn’t even want to talk about basketball, other than ‘how’s Peninsula?’ Or ‘how’s Sumner doing?’ He just wanted to talk about me, my family, or his family.”

Olson treated Jackson like he did his players. They were family.

Jackson learned that the day he met him. He recalls driving with Love to meet “Coach O,” his idol. Then Olson handed Jackson his business card and offered him a job as a student manager.

Olson offered him a direction — a track as a student manager that paid for his college.

“When you’re an 18-year-old kid trying to find your way, when you’re at the ‘Y’ in your life, you can either go left, right, backward,” Jackson said. “He allowed me to go forward.”

When it comes to Xs and Os, Olson wasn’t the coach that left the biggest imprint on Jackson. Olson knew how to build relationships. He knew he needed to know each of his players’ backstories, know their hobbies, know their parents personally and understand where they came from.

Jackson struggled with that difference in philosophies at Peninsula. His playbook was long. They had 25 zone sets, three different half-court defenses — “it was too much,” Jackson said. Olson was all about relationships, and Jackson realized he had to make that more of a focus.

“There’s a reason why (Olson) won so much. He had the player’s heart in mind at all times,” Jackson said. “And he allowed the players to be themselves.”

He credits Sumner’s success this past season, winning its first state tournament game in 49 years in epic fashion, to the bond the team shared — individually and as a collective.

“I think the reason why we did so well is personnel, you have to have personnel,” Jackson said. “But number two, we really were so relational with our guys.”

On that day at Lake Oswego High School, Jackson recalls Olson flying in on a private jet into the Hillsboro Airport. The coach’s presence felt as if a celebrity was walking the school’s halls.

That day, Love was the celebrity.

He’d go on to become an NBA champion, five-time all-star and become inducted into the hall of fame at his college of choice: UCLA.

Olson flew home from that trip without his prized possession — the very reason he was there.

But he didn’t walk away empty-handed.