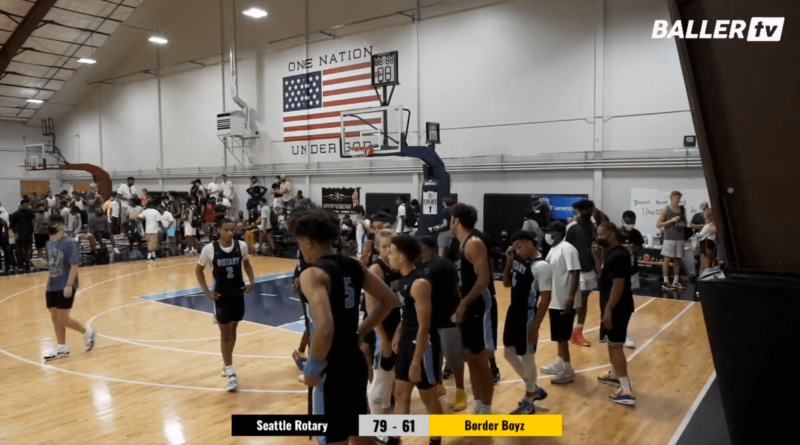 O’Dea’s Banchero was tallied for 14 points and 12 boards and helped spur a second half run that left the Border Boyz scoreless for a six minute stretch, allowing Rotary to pull away in what was a fairly free-flowing speed of play.

The marquee matchup comes at a time when many AAU teams in Washington have traveled out of state in order to play in tournaments, since none are allowed in-state under Gov. Jay Inslee’s Safe Start plan to combat the coronavirus. That’s left many recruits and the clubs they play for seeking options in states with more relaxed responses to COVID.

Rotary’s second half run helped grow the lead to 16, and it pulled away from there. Williams subbed back in and scored a quick five points — an attempted dunk that he readjusted under pressure to lay in and a step-back three, back-to-back.

RELATED: ‘These kids have just been screwed.’ Class of 2021 adjusting to lost summer amid COVID-19 pandemic

Banchero threw down several dunks, including a two-handed baseline alley-top finish off a lob from Seattle Academy point guard Leo DeBruhl. Also impressive was O’Dea’s Dezjay Perkins, who was physical on defense and exploded for a two-handed dunk in the second half.

Several teams across the state are playing in the Pangos Rocky Mountain Summit — six from Seattle Rotary and five from Team Lavine. The AAU tournament that goes Aug. 28-30 and games consist of two 16-minute halves.

Williams, a standout at San Ysidro High School in San Diego, dazzled in stretches, was terrific in stretches, pushing the tempo in transition and taking it to the defense.

For Battle Ground’s Perry, who committed to Gonzaga last summer and spoke in-depth about it to SBLive Washington, it’s his first public action playing with Seattle Rotary. Last summer was the 6-foot-9 forward’s first on the Nike EYBL circuit. He played with Portland-based Rose City Rebels.

Watch a full replay of the game, which was streamed on Twitter through BallerTV (subscription required) on Periscope or on Twitter.

Here are all the Washington high school boys basketball players competing in Utah this weekend, as provided to the tournament organizers.